The Top 10 Cities for Career Opportunities in 2017 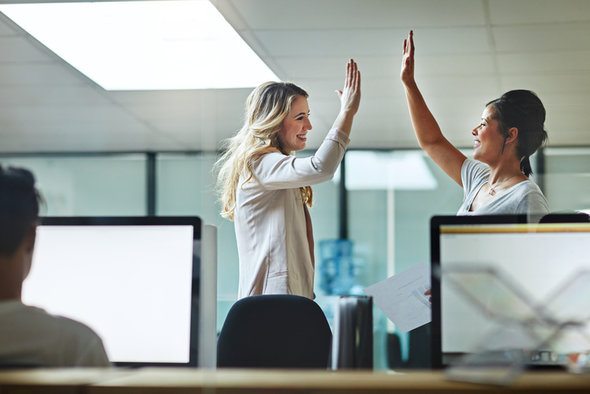 Deciding where to move for work can be a daunting challenge. Is moving to a less affordable area in order to take a higher income going to end up doing more damage to your budget than its worth? And what about the long term? Where is the best place to foster a great lifelong career? Below SmartAsset tackles these questions to find the best cities for career opportunities.

In order to find the best cities for career opportunities, SmartAsset looked at data on seven metrics. Specifically, we looked at data on unemployment rates, one-year change in total employment, median income, income growth with age, median housing costs, career counselors per 1,000 workers and the number of higher education teachers per 1,000 workers.

This is SmartAsset’s third annual study of the best cities for career opportunities. Read the 2016 study here. 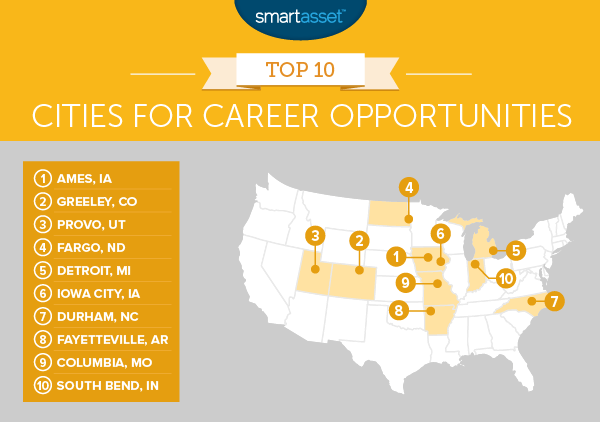 Last year’s number one ranked city slipped slightly in the ranking but still claimed third place. Provo is a great place to secure a new job or launch a new career. For one, the total number of jobs in the area jumped 4.4% from 2016-2017. That’s the 12th-highest rate of increase in the study, suggesting there is plenty of opportunity in Provo. Provo also has one of the highest rates of educational, guidance, school and vocational counselors in our study at 4.51 per 1,000 workers.

Provo scored well in other metrics as well, like income growth. On average late-career workers earn about 43% more than early-career workers in Provo, the fifteenth-largest difference in the study.

Fargo is a great, affordable city for those looking for new career opportunities. Median annual housing costs here are only $9,300, the fourth-lowest in our top 10. Jobs also seem to be available in North Dakota’s most populous city. Fargo has an unemployment rate of only 2.3%, the second-lowest in the study.

On all other metrics Fargo also scores above-average. So if you’re someone looking for a little bit of everything – income growth, jobs, training – Fargo is a great spot to end up in.

Motor City has been hit hard by the decline in manufacturing industries which is afflicting large portions of the Midwest. The good news is that Detroit seems to be recovering. For example, the median income for workers in Detroit is just under $40,000, the 38th-highest in our study.

That income goes farther than the initial number suggests due to the low housing costs in Detroit. Detroit’s median annual housing cost is $8,460, or roughly 21% of the average worker’s annual salary. Motor City is also a pretty good place to have a long career. Our data shows that late-career workers earn over 22% more than early career workers, on average.

If you stick around in Iowa City to advance your career, odds are you will receive quite a few raises. Late-career workers here earn almost 50% more than early-career workers on average. Another reason to stick around Iowa City are the abundant career training opportunities. The city has 2.9 career counselors per 1,000 workers, a top 40 rate.

Plus, Iowa City has no shortage of opportunities, the unemployment rate here is only 2.9% and the overall number of jobs in the area grew 3.7% from 2016-2017.

Durham is a well-deserved newcomer to our top 10. Thanks in part to the University of North Carolina, Duke University and other local colleges in Durham, this place has over 44 higher education teachers per 1,000 workers, the highest rate in our study. This makes Durham hard to beat when it comes to getting a first-class education to advance a career.

But Durham is more than just its universities. Workers here tend to be well-paid. Data from the Bureau of Labor Statistics shows that the average worker in Durham earns just under $44,000 per year, the 16th-highest in the study. That income is, however, slightly offset by the high housing costs. The average home in Durham costs just under $12,000 per year in total housing costs.

Managing the financial gain that comes along with a new job can be tougher than it looks. These are the top financial advisors in Fayetteville, should you want some aid taking care of your assets.

Columbia is one of the best cities in the country for getting professional development. This is shown by the high number of career counselors and higher education teachers there are in the area. Columbia has the second-highest number of career counselors in the study with 7.31 per 1,000 workers. Columbia also has 8.73 higher education teachers per 1,000 workers in our study. It ranks 56th in the study for that metric.

South Bend also has relatively affordable housing, with median housing costs amounting to $8,400 per year, 49th-lowest in the study. Finally, South Bend is also a good place to find work. The unemployment rate here is only 3.3%. 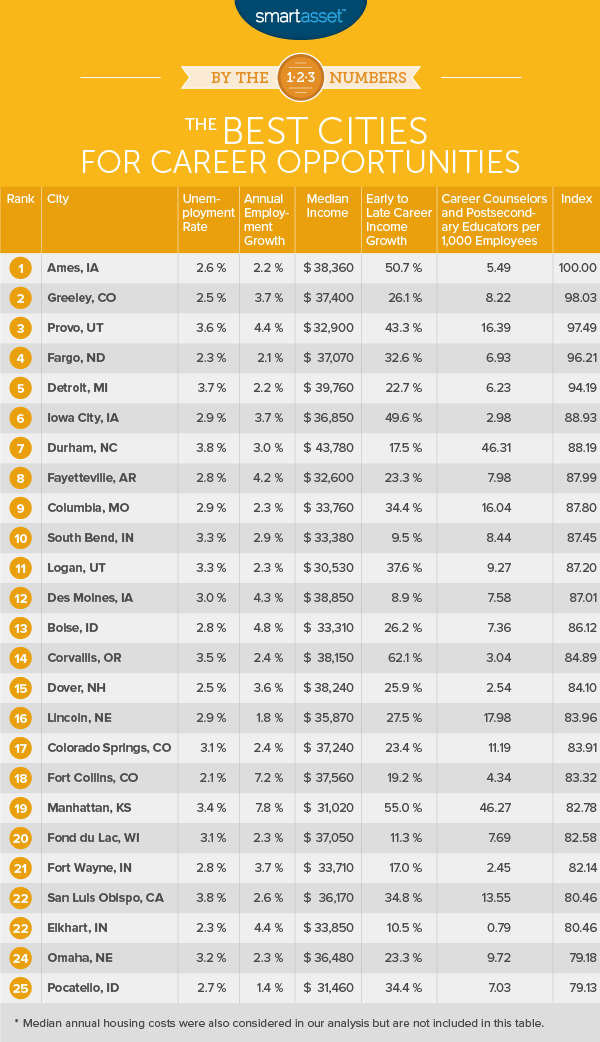 In order to find the best cities for career opportunities in 2017, we looked at data for 355 different cities. We compared these cities across the following seven metrics:

Tips for Deciding If a Higher-Paying Job Is Worth It

So you’ve been offered a new job with a nice raise in a new city. You might think taking it is a no-brainer, but there are certain things you should keep in mind when deciding whether or not to move for a new job.

One important consideration is the cost of living. For example, let’s say you want to take a new job which would require you to move from Dallas to New York. Just on average housing costs alone, New Yorkers spend almost $5,000 more per year. This means you need to earn at least $5,000 more in New York than you did in Dallas to break even and that’s just looking at housing.

Another benefit to living in Dallas is that Texas has no state income tax. New York income taxes, on the other hand, are some of the highest in the country. The reverse of this is also true. It may make sense to take a hit on your monthly paycheck, to move to a more affordable destination.