The Best Places to Work in Manufacturing

Ever since Samuel Slater brought the secrets of the English textile industry to America, manufacturing has been a big part of the American economy. From the New England textile mills to Pittsburgh’s steel and Detroit’s automobiles, manufacturing has long been a source of employment for American workers. But for a variety of reasons America is not the epicenter of manufacturing that it once was and some communities have suffered badly from the loss of manufacturing jobs. But it is not all doom and gloom. Some places in America are bucking the trend and are in fact great places for someone who wants to work in manufacturing.

To find the best places to work in manufacturing SmartAsset looked at 389 different statistical areas and compared them on six metrics. SmartAsset looked at one-year employment growth, five-year employment growth, one-year income growth, five-year income growth, the ratio of manufacturing workers to the total worker population and income left over after housing costs. To get a better idea where we got our data and how we came up with the final index, read the methodology below.

Manufacturing South. While northeastern cities tend to do well in our STEM studies, in this look at manufacturing it was the southern metro areas that tended to do better.

Hard-Working Wisconsin and Texas. Wisconsin is tied with Texas for having the most places in the top 10. Each state has two.

Rising Incomes. While the national trend is down for manufacturing jobs, incomes tend to be rising for the jobs that are still available.

Not a manufacturing worker? Check out SmartAsset’s best cities for pay in STEM. 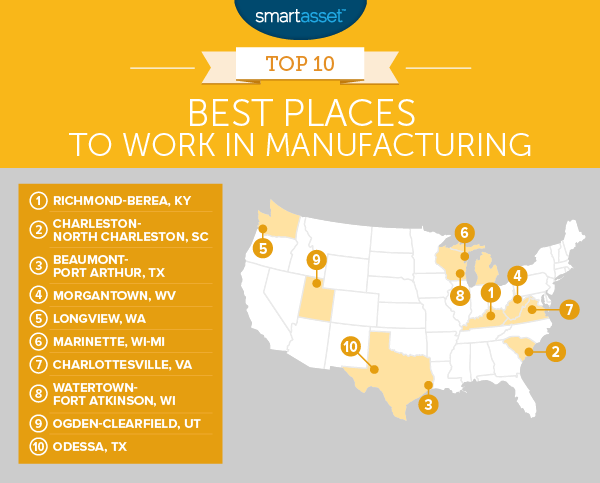 Located in the heart of Kentucky, the Richmond-Berea area leads our study of best places to work in manufacturing. The standout statistic is the job growth between 2013-2014. According to U.S. Census Bureau data there was a 40% increase in manufacturing jobs in the area over that period. This ranked second of all the places in our study. Wage growth has also kept up with the increase of demand for labor. According to our data average income for manufacturing workers has increased by around 9%, 25th in our study.

While there has not been great job growth in the Beaumont-Port Arthur area (3.7% over the 2009-2014 period) there has been really strong income growth. During the 2009-2014 period the average salary of a manufacturing worker rose 42% from $66,704 to $95,063. That was the 5th largest increase in our study. Housing costs in the area remain relatively low. Beaumont-Port Arthur has the highest income after housing costs of places we analyzed, at $87,225.

Moving to Texas? Find out what your property taxes will be.

Like Longview, Marinette made its initial fortune in the timber boom of the late 19th and early 20th century. Marinette is not just a timber town, however. There is also the Marinette Marine, Ansul/Tyco company and Waupaca Foundry all offering manufacturing jobs in the area. Because of the presence of those companies and others, manufacturing workers make up 38% of all workers in the area. That is the third-highest figure in our study. The average income of workers in Marinette  grew by 31% over the 2009-2014 period, one of the highest in the study.

According to U.S. Census Bureau data over the 2009-2014 period the number of manufacturing jobs in the Ogden metro area grew 48% while average incomes for manufacturing workers grew 33%. One of the largest automotive safety equipment manufacturers, Autoliv, is headquartered in Ogden. 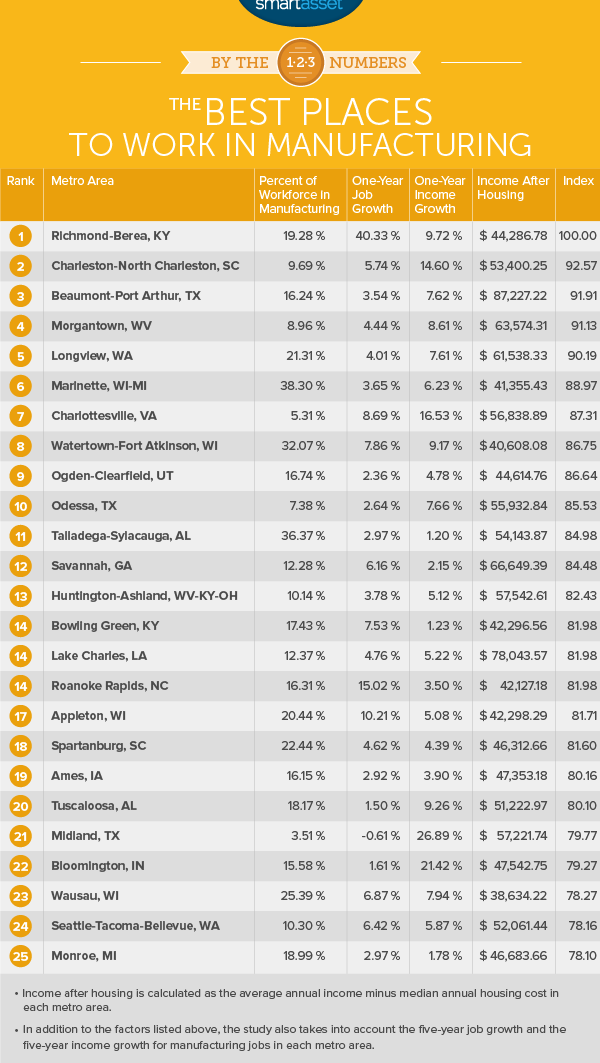 To find the best places to work in manufacturing, SmartAsset looked at the U.S. Census Bureau data on income and employment for manufacturing workers in 398 of America’s largest statistical areas. Specifically, we considered the following six metrics:

Manufacturing jobs as a percentage of the total workforce. Data comes from the U.S. Census Bureau.

Income after housing costs. This is the average income minus average housing costs, including property taxes and insurance.

We ranked each metro area on those six metrics and then averaged those rankings, giving equal weight to each metric. Lastly, we calculated an index score ranging from 0 and 100 based on the average ranking. The city with the best overall average scored 100.