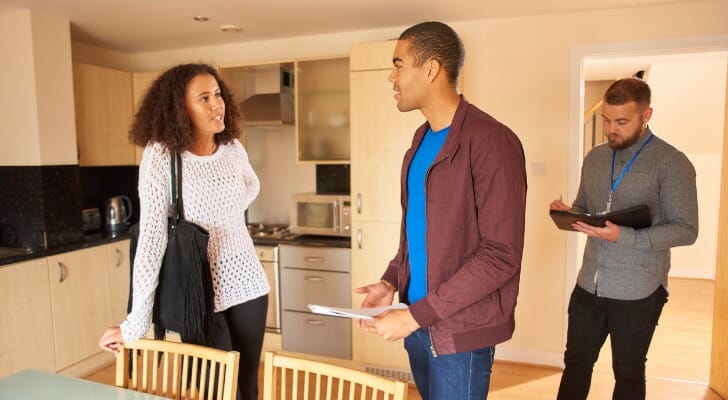 Taxes and rent are unavoidable expenses for those who don’t own their home, and though there are other necessities like food, that category and others allow for more flexibility in how consumers budget. For renters, the yearly fixed cost of taxes and rent can greatly affect how much money they have left over to spend and save, especially for those looking to put money down on a mortgage.

With all this in mind, SmartAsset analyzed data to find the cities where renters have increasingly more money left over after covering taxes and rent. For details on our data sources and how we put the information together to create our final rankings, see the Data and Methodology section below. 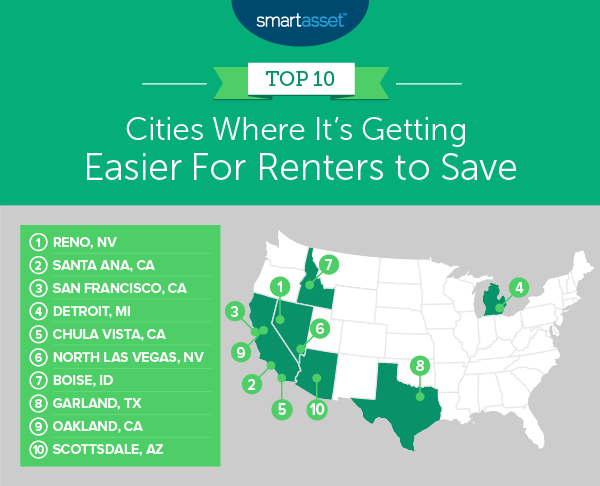 The first of four California cities on this list, Santa Ana saw average income after taxes and rent payments go from $16,285 to $23,847. That $7,562 increase represents a 46.44% jump. While you can pocket some of that extra cash for necessary household expenses, you can also choose to invest some of it in a variety of ways.

San Francisco, California’s income after taxes and rent payments jumped $14,129 from 2013 to 2017. A relatively high income to start means that increase was third overall in terms of percentage points, at 41.38%, but it is the largest total increase overall in terms of raw dollars.

Detroit, Michigan ranks fourth on our list of the cities where it’s getting easier for renters to save. The Motor City saw median income after average taxes and rent increase from $6,760 in 2013 to $9,334 in 2017, an increase of 38.08%. As Michigan is tax-friendly toward retirees, it wouldn’t be a bad idea to consider putting some of that extra money in a retirement account.

North Las Vegas, Nevada had a median income after taxes and rent payments of $17,421 in 2013. That increased to $23,099 in 2017. That means that over the course of that time period, the amount of money that average renters had to spend after subtracting rent and taxes from their income increased by $5,679, or 32.60%.

Oakland is the ninth-ranking city overall, and the final California city in our top 10. The median income after taxes and rent payments for residents of this Bay Area city was $24,011 in 2013 and had increased to $31,351 in 2017. That is an increase of $7,339, or 30.57%. Oakland is also one of the top 10 cities of 2019 where renting with a roommate saves the most, so renters who are roommates here could potentially have even more savings to use for their needs and investments.

Scottsdale, Arizona is the final city in our top 10. The median income after taxes and rent payments in 2013 was $27,157. By 2017 it had increased to $35,142. That’s an increase of $7,985, or 29.40%. After budgeting for other necessities like food and clothing, you’d likely still have enough to be within the current limits for contributing to your IRA. 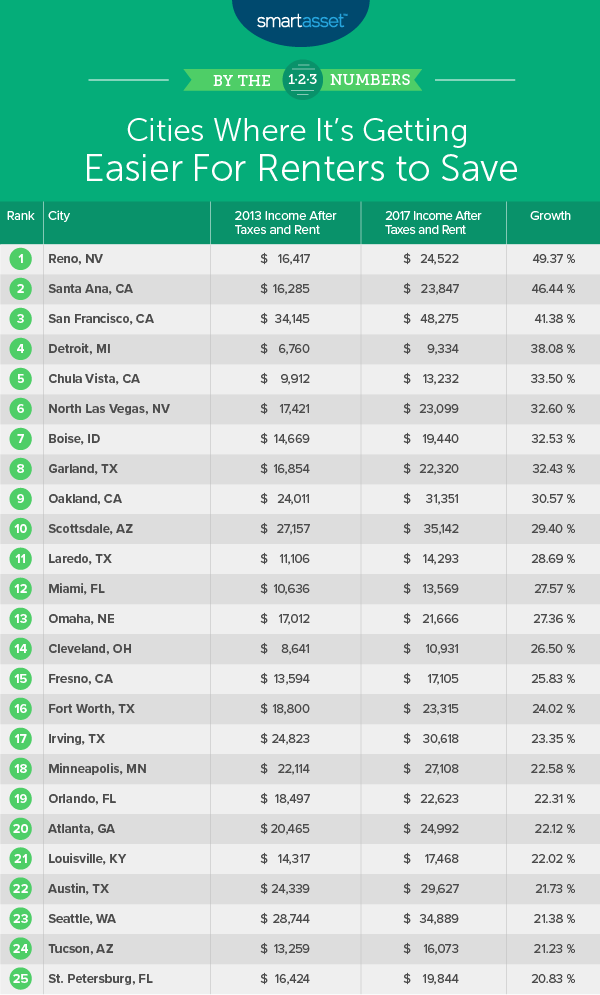 To find the cities where it’s getting easier for renters to save, SmartAsset determined the median income after taxes and rent payments for 100 of the largest cities in the country in both 2013 and 2017, and then calculated the percentage change. To find our results, we took the median income for a city minus estimated taxes on that income and average annual rent. The sources for our data are as follows:

Tips on Getting More From Your Money