Cities That Have Recovered Most Since the Recession 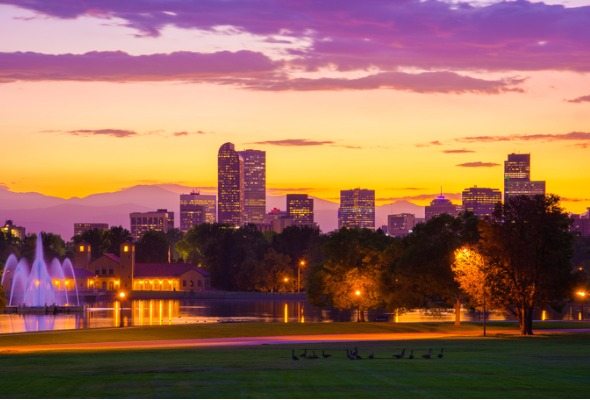 The Great Recession lasted from late 2007 to mid 2009. It was the longest recession since World War II and had huge impacts on the U.S. economy. Investors lost big as the S&P 500 Index fell 57%. The housing market crashed and home values fell about 30%. National unemployment rose to a peak of about 10% in late 2009. Almost a decade after the start of the Great Recession, conditions have improved in many places.

After considering multiple economic factors, like unemployment and income growth, SmartAsset has created a list of the cities that have recovered the most since the recession. 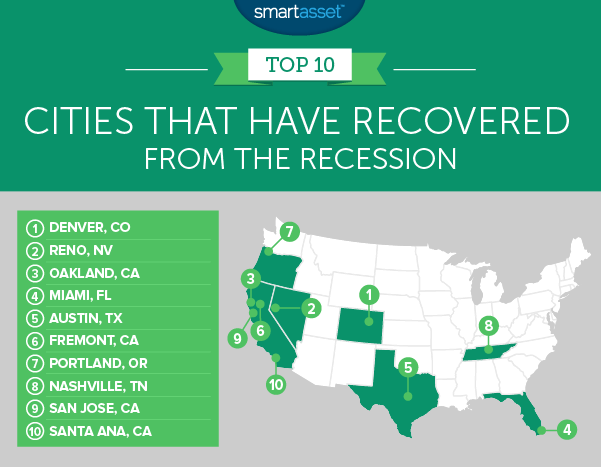 Denver’s housing market has also done well. Home values rose 44.3% since the recession. That’s the fifth-largest increase of the cities we looked at. Not to be outdone, household incomes also grew 35.57% – sixth-highest.

With all these great improvements (not to mention the numerous museums, thriving art scene and beautiful nature) it’s no surprise that Denver’s population has grown 14% since 2010. In particular, a large number of millennials are moving to Denver.

According to the U.S. Census Bureau, poverty in Miami decreased 7.5% from 2010 to 2016. That’s the second-highest decrease in our study. However it’s worth noting that Miami’s poverty rate in 2016 was 24.9%. That’s still the 14th-highest of the cities we looked at.

Austin has made big strides since the recession. It ranked in the top 10 for four of our five metrics. Home values rose 43.8% (sixth-highest) and household incomes went up 40.6% (second-highest). The poverty rate decreased 7.3% in Austin, the third-largest decrease in our study.

Fremont ranks in our top 10 thanks largely to its changes in home value and income. Between 2010 and 2016, the median home value in Fremont rose from $590,000 to $877,700. That’s an increase of over 48% and is also the third-largest increase in our study. It’s no surprise that home values have increased so much. Fremont has drawn new residents as one of the safest and most livable cities in America.

Along with increasing home values, Fremont has seen median household incomes go up by 40%. The median income of $122,419 in Fremont is the highest in our study. The city also had the lowest poverty rate (just 3.1% in 2016) out of the cities we considered.

Portland’s economy has done well in the years since the Great Recession. For starters, unemployment has steadily dropped since 2010. It was at just 5% in 2016. That’s lower than pre-recession rates (6.5% in 2007). Median household incomes have also grown 31.67%, which is the ninth-highest increase in our study.

Nashville is the easternmost city in our top 10. One reason that it ranks so high is that Nashville saw an increase of 3.5% in labor force participation between 2010 and 2016. That is the third-largest increase of all the cities we looked at.

Between 2010 and 2016, the median household income in San Jose, California rose 32.74%. That’s the seventh-highest income growth in our study and one of the big reasons that San Jose is in the top 10.

Median home values in San Jose also increased by 43.57%. That’s our study’s eighth-highest percent increase in home value. In fact, the median home value went up almost a quarter of a million dollars from $558,600 in 2010 to $802,000 in 2016. Only two other cities in our study (San Francisco,California and Fremont, California) saw home values increase by more.

However, household incomes haven’t grown quite as quickly. Santa Ana residents only saw an increase of about 20% between 2010 and 2016. 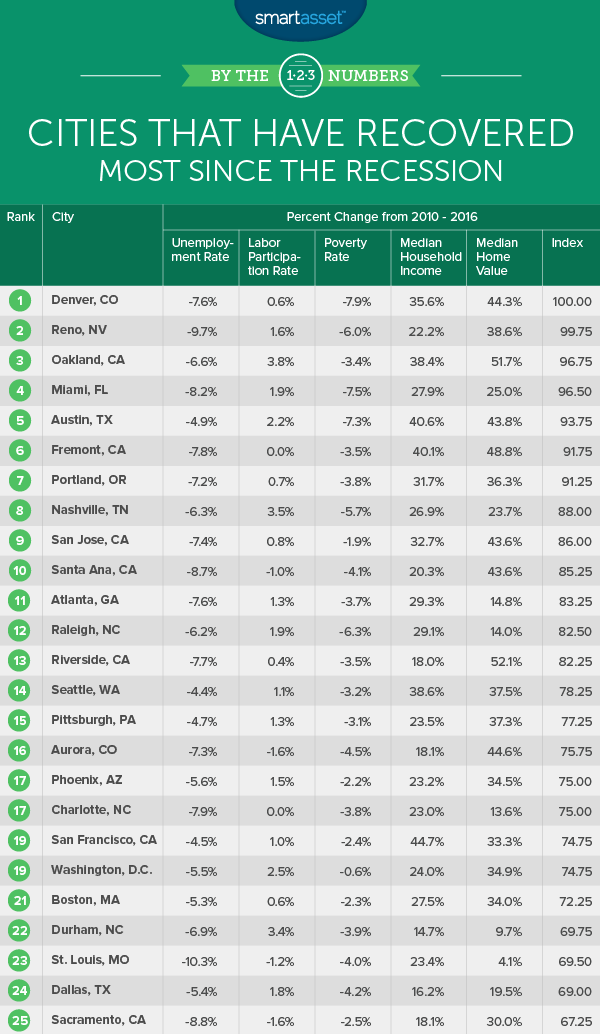 We determined which cities have recovered most since the recession by considering five metrics. The metrics all look at changes between the years of 2010 and 2016. We chose 2010 as our earliest comparison point because it is the year that unemployment peaked nationally (according to data from the U.S. Census Bureau). To ensure we had the most accurate data available, we considered the 100 largest cities in the U.S. for this study, based on 2016 population data from the Census Bureau. The five metrics we used were

Tips to Help You When Money Is Tight