Deciding where to teach isn’t always easy. Besides considering school quality and culture, teachers looking for jobs in any given area have to think about whether they’ll be able to afford to live there. The median annual pay for kindergarten and elementary school teachers was about 40.4% higher than the median income for all employees in May 2015, according to the Bureau of Labor Statistics. But teachers in some places with a high cost of living still struggle to make ends meet.

This is SmartAsset’s second annual study of the best places to be a teacher. Read the 2015 study here.

SmartAsset found the best places in America to be a teacher by ranking 140 of the largest U.S. metro areas across seven metrics. Just like we did in the 2015 version of our study, we looked at average high school graduation rates, housing costs, crime rates and average math and reading proficiency rates in each metro area.

After we completed the 2015 version of our study, the Bureau of Labor Statistics (BLS) redefined their metro areas. Because this change prevented us from accurately assessing the growth in teachers’ salaries and job prospects in the past year, we didn’t include either of these factors in this year’s study. Instead, we considered two new factors: the amount of money that school districts spend on each student and the strength of each state’s teacher union. (Read more about our methodology below.) 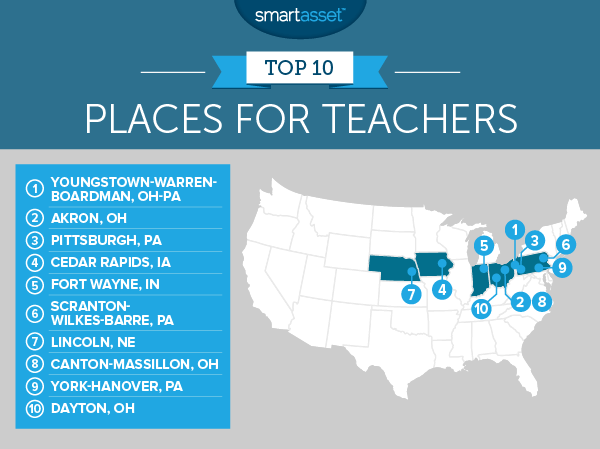 The Youngstown metro area ranks as the best place in the U.S. to be a teacher. The average public school teacher who lives there makes $57,909 per year. The average person there pays just $644 each month for housing-related expenses.

On average, high schools in the Youngstown-Warren-Boardman metro area have a graduation rate of 88%. If students don’t want to stray too far from home after earning their diplomas, teachers can help them prepare to attend the colleges in the area, like Youngstown State University or Kent State University at Salem.

Our study shows that schools in the Akron area rank well for reading and math proficiency. Along with students in the Indianapolis-Carmel metro area (which took the 80th spot in our ranking), students in Akron had the third highest proficiency rate in the 2013 – 2014 school year.

Out of the top 10 metro areas in our study, the Pittsburgh metro area invested the most money in their students. According to 2014 school finance data from the U.S. Census Bureau, school districts in this metro area spent $10,868 on each student.

Teachers interested in working in an area with a strong union might want to look at schools in Pittsburgh and other metro areas in Pennsylvania. The state ranked fourth in the Thomas B. Fordham Institute’s analysis of the states with the strongest teacher unions. The 2012 study looked at several factors, including each state union’s perceived influence, its resources and whether state policies aligned with union goals and ideals.

Teachers probably won’t have a difficult time finding jobs in Cedar Rapids. The unemployment rate in the metro area is fairly low. In June 2016, it was 4%, according to the BLS. Data from the U.S. Census Bureau reports that it had an unemployment rate of 3.6% in 2014.

In addition to being the fourth best place in America for k-12 public school teachers, a recent SmartAsset analysis shows that the Cedar Rapids metro area ranks as the best place to raise a child. The area has good schools and an average high school graduation rate of 88%.

The Fort Wayne metro area is located in northeastern Indiana and is home to about 422,029 people, according to the Census Bureau. Teachers who live there can benefit from its low cost of living. While the average annual salary for teachers is $49,848, the average person in Fort Wayne only spends about 17.4% of his or her income on housing costs.

BLS data shows that there were more than 7,000 public school teachers in the Scranton-Wilkes-Barre metro area in 2015. Besides having access to one of the strongest state teacher unions in the country, teachers earn $60,925 per year, on average. That’s roughly 39% higher than the average salary for all jobs in the metro area.

Out of all of the jobs in the Lincoln metro area, just 1.7% of them were reserved for k-12 teachers in 2015. While teachers are in the minority, the public schools score well on some of the factors we analyzed.

On average, 86% of public school students in the Lincoln area graduate from high school. And according to a recent SmartAsset study, Nebraska ranks eighth on the list of the states with the best k-12 schools.

Public schools in the York-Hanover metro area spend more money on individual students than those in most of the metro areas in our analysis. Census Bureau data shows that school districts in the York area spend about $12,848 on each student.

Schools that spend more money on their students don’t always provide them with a world-class education. But a recent report from the Albert Shanker Institute suggests that there’s a positive correlation between per-pupil spending and student success rates.

The average k-12 public school teacher in the Dayton metro area makes $60,257 annually. On average, residents in the Dayton area spend just $9,900 on housing-related expenses each year. That means that teachers can likely use more than 80% of their pay to cover other bills and discretionary items.

SmartAsset concluded that the best places in America for teachers would have a low cost of living, strong teacher unions and schools that provide students with a quality education. To complete our analysis, we looked at 140 of the largest metro areas in the country and compared them using seven different factors, including median monthly housing costs, average annual salaries for k-12 teachers and the violent crime rate (violent crimes per 100,000 residents) in the principal city of each metro.

We also looked at average high school graduation rates in each metro area and average proficiency rates in language arts and math for the 2013-2014 school year. Finally, we took two additional factors into account that replaced the income growth and employment growth metrics from last year’s study: teacher union strength (based on state-level rankings from the Thomas B. Fordham Institute) and the amount of money that school districts in each metro area spent on each public school student.