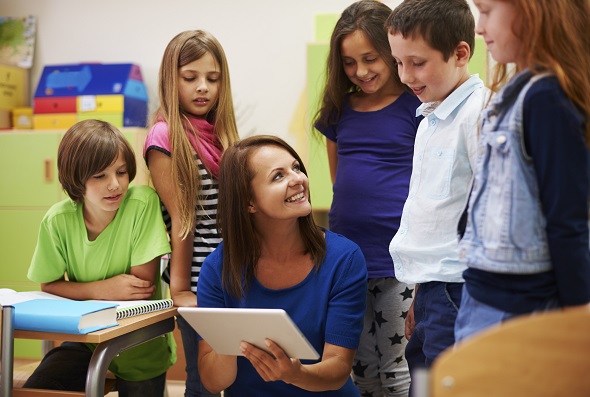 According to the Bureau of Labor Statistics, the number of K-12 teachers in the U.S. grew by just half a percent between 2013 and 2014, a fraction of the overall rate of jobs growth across all occupations (1.9%). Likewise, income growth for teachers was below average. There are a number of reasons teachers have faced poor job market conditions in recent years, but a basic one is demographics.

Since 2009, as the millennial generation has aged into early adulthood, the number of people below the age of 18 in the U.S. has fallen by 1.2%. That means fewer students. What is true nationally, however, is not true in every area individually. In fact, in some metros, population growth has been strong and teachers have seen strong employment and income gains.

To find the best places to be a teacher, SmartAsset collected employment, school and city data on over 400 of the largest metro areas in the United States. Of those 400 metros, we found the areas that have had positive job and income growth for teachers since 2012. We then looked at factors such as average teacher salaries, total employment gains and average graduation rates in each area. (Read more about our methodology below.) 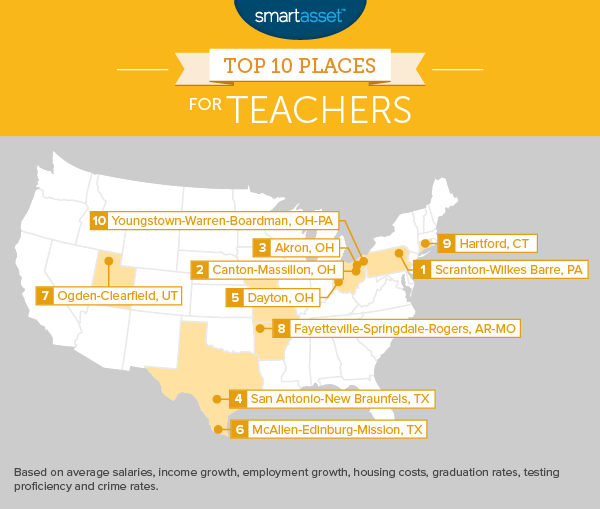 Our study shows the best place to be a teacher is the Scranton metro area. According to the Bureau of Labor Statistics, the region has added hundreds of teachers over the past few years, with the total teaching workforce increasing by 34% since 2012. Teaching salaries over that same period have increased by 6%.

Along with good job prospects, teachers in the Scranton area benefit from a low cost of living. The median monthly cost of housing in the metro is just $772, well below the national average. That includes property taxes, which average about 1.41% in Lackawanna County.

Located south of Akron in eastern Ohio, the Canton metro area has some of the best schools in the U.S. Of metros with positive job growth and income growth for teachers since 2012, Canton rated first for its metro area graduation rate. Over 90% of students in the Canton area successfully graduate from high school.

Since 2012, the average salary for teachers in the Akron metro area has increased by more than $2,000. With median monthly housing costs in Akron at $838 (according to the U.S. Census Bureau), that extra income is enough to make average rent or mortgage payments for two full months.

A recent SmartAsset analysis found that the Dayton area is one of the best in the country for career opportunities. An expanding workforce, low unemployment and low housing costs are all reasons the area may be worth considering for those looking for a new start on their careers. This is especially true for teachers. The number of teachers in the Dayton area has increased by more than 17% since 2012.

The Ogden metro area is one of the fastest growing in the United States. The population under the age of 18 has grown by 15.8% since 2009. In response, the region has added more than 900 teachers in recent years, according to the Bureau of Labor Statistics.

Teachers in the Hartford area are among the most well-remunerated in the country. The average salary for Hartford-area K-12 teachers is $70,786, well above the national average. Even when controlling for housing costs, which average $1,264 per month, teachers in the Hartford metro still have higher discretionary income than those in most other cities.

The fourth Ohio metro to rank among the top ten places for teachers, the Youngstown area has had strong jobs growth for teachers in recent years. At the same time, the cost of living in the area has remained low. For example, according to the U.S. Census Bureau, the median home value in the metro is $100,000. That is easily affordable on the region’s average teacher salary of $56,835.

SmartAsset’s analysis of the best places for teachers sought to identify the places that had strong employment markets for teachers. To that end, we analyzed employment and salary data from the Bureau of Labor Statistics in the 403 largest metro areas in the country.

For each of those metros, we calculated the change in average income and the change in employment for k-12 teachers from 2012 to 2014. We then eliminated metro areas in which either income or the total number of jobs for teachers has fallen since 2012.

In addition to a strong employment market, SmartAsset’s analysis also identified areas in which there are good schools and which have a high standard of living. For the remaining 55 metros, we calculated an index score from 0 to 100 based on the following seven metrics:

We ranked each metro according to these seven factors. We then averaged those rankings, giving half-weight to employment and income growth and full weight to all other metrics. The city with the best average ranking scored a 100.

Data on income, employment growth and income growth comes from the Bureau of Labor Statistics.  Data on housing costs comes from the U.S. Census Bureau. Data on graduation rates and proficiency rates comes from the Department of Education. Data on violent crime comes from the FBI’s uniform crime reporting database and from local government websites.

Read the 2016 version of this SmartAsset study.