The Best Places for Children in 2017 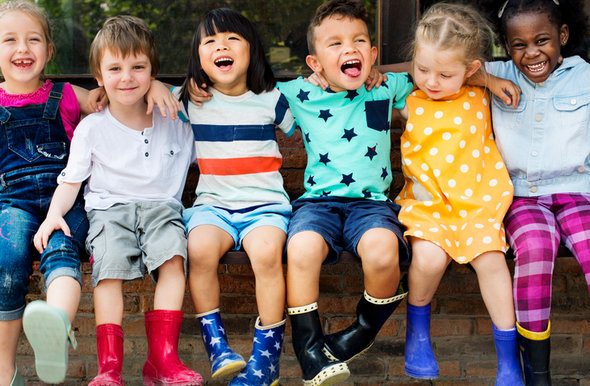 Looking to move your family? Check out how much home you can afford.

In order to find the best places for children, we analyzed data on 198 metro areas. We gathered data on metrics like percent of kid-friendly establishments, median home value, high school graduation rate, math proficiency rate, language arts proficiency rate, child poverty rate, percentage of population under age 20, air quality, water quality, intergenerational mobility, infant mortality rate, child mortality rate and the percent of children who are uninsured. Check out our data and methodology section below to see where we got our data and how we put it together.

This is SmartAsset’s third annual study on the best places for children. Read the 2016 version of the study here. 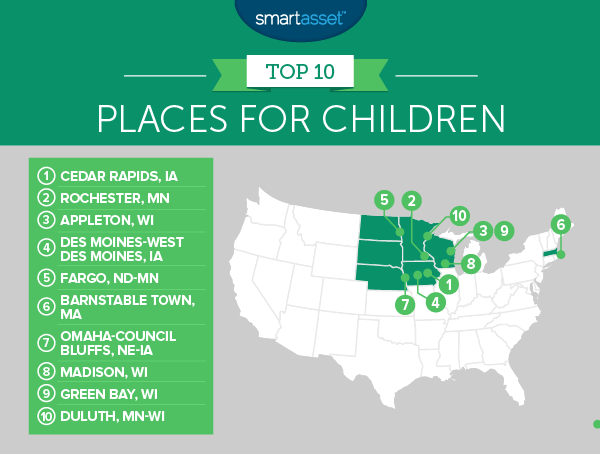 Cedar Rapids is once again the best place for children in the country. Some of its scores have improved since last year’s study. For example the graduation rate rose from 88.49% to 88.53%, and language arts proficiency rate rose from 76.92% to 79.56%. That language arts rate is the second-highest in the study.

In other metrics Cedar Rapids did not score as well as it did last year. The area’s math proficiency rate dropped from 80.32% to 76.34%. The child poverty rate also increased from 11.9% in last year’s study to 13.4% in this year’s study.

Rochester climbed from six in last year’s study to claim second in this year’s study. Med City improved its scores in language arts proficiency, child poverty rate and percentage of population under 20.

The best argument for why Rochester is great for children is its intergenerational mobility score. No metro area in the study gives children a better shot at moving up the income ladder than Rochester. This area also scores well in environmental factors like air quality and water quality.

Appleton catapulted from ninth last year to third this year. This metro area has the ninth-highest percentage of establishments which are kid friendly, including five arcades and eight bowling alleys.

The area also has the highest graduation rate in the study. Over 94% of Appleton students graduate. However Appleton’s reading and math scores show room for improvement. Only 51% of students are proficient in language arts and 58% are proficient in math.

Another good sign is the area’s declining child poverty rate. The area saw a steep decline in the percent of children who are living in poverty. In last year’s study this rate was 17.1%, and this year it fell to 13.8%. At the same time the percent of the population who are children rose. Last year’s study showed 27.9% of the population were under 20. This year that number has risen to 28.2%.

Fargo vaulted five spots from last year to claim this year’s fifth place. This area had particularly strong finishes in three metrics: child poverty rate, intergenerational mobility and percentage of households with a water quality violation. Fargo scored in the top three in each of these metrics.

If Fargo wants to climb further into the top five, it will need to improve on education. Only 53% of Fargo students are proficient in language arts and just under 55% are proficient in math. Both of those scores are low for the top 10.

Barnstable is the only metro area outside of the Midwest to break into our top 10. This cape town is a fun place for both children and adults. It comes with great beaches as well as plenty of kid-friendly establishments, including 22 museums and seven bowling alleys. In total, 0.45% of establishments in Barnstable are kid-friendly entertainment establishments.

But on average Omaha-Council Bluffs scored well and earned its place in the top 10. For example, 78% of kids are proficient in math. That’s the third-highest score in the study. Omaha also gives children plenty of opportunities to have fun and make friends. Over 28% of the population in Omaha are under the age of 20.

The area jumped an impressive 17 spots from 25th last year to eighth this year. Madison owes its jump in the rankings to its decreasing child poverty rate and improved air quality. It ranked sixth overall in child poverty and 48th for quality of air.

Madison’s neighbor to the northeast, Green Bay, takes the second-to-last spot in our top 10. Green Bay scores well in both air quality and water quality. No families dealt with water quality violations in 2014, meaning parents do not need to be concerned with the drinkability of their tap water. Green Bay also has a median air quality index of 38, one of the best scores in the top 10.

Duluth just squeaks by Laredo, Texas to take the final spot in our top 10. Around 0.4% of all establishments in the Duluth area are kid-friendly. That’s the second-highest rate in the top 10. This means kids in the area have plenty to do.

In terms of home affordability Duluth also scores well. The median home value in Duluth is $147,300 – the lowest in the top 10.

In order to find the best places for children, SmartAsset gathered and analyzed data on 198 metro areas. Specifically we looked at the following 13 metrics:

Raising a child is expensive no matter how you slice it. The United States Department of Agriculture estimates that raising the average child to the age of 17 would cost cost over $230,000. But all that spending means there is plenty of room to optimize and stretch budgets.

One budgeting tip for new parents is to think carefully about what is a need vs. what is a want. Do you really need a top-of-the-line stroller or crib? An average-priced one may suit your needs just fine. Another option is to buy used items. It is possible to find affordable, lightly used changing tables or strollers for sale at thrift shops or on websites like Craigslist. Your local community website or parenting board may even have a forum for listing used baby items. A third easy way to save on costs is to buy items you know you’ll need, like baby wipes and diapers, in bulk. Buying in bulk can cut the cost of those items in half, saving hundreds of dollars every year.

There are also ways to save while you spend. If you have a high enough credit score, you may qualify for the best rewards credit cards. These credit cards come with great perks like 2% – 5% cash back on certain categories like gas. This means you can turn driving your child to and from daycare into your next vacation.