The NFL Teams With the Most Die-Hard Fans 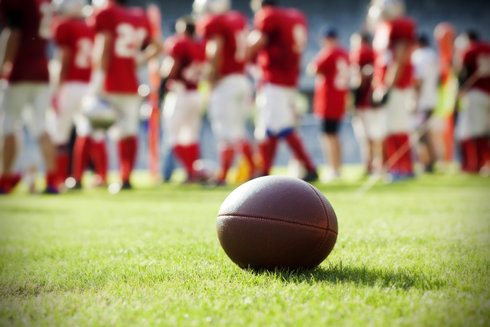 Baseball may be America’s pastime but football, and the NFL in particular, is the most popular sport in America today. Last season the NFL made over $13 billion in revenue and 111.9 million people tuned in to watch the Denver Broncos defeat the Carolina Panthers in Super Bowl 50 this past February. But what makes football truly special is the passion of the fans. NFL fans are famous for braving bad weather and outrageous beer prices in the hopes of cheering their team to victory. We at SmartAsset thought it would be interesting to measure the fan experience in order to determine which NFL teams have the most die-hard fans.

What do we mean by “die-hard?” We made a few assumptions for this study. First, we assumed that fans who are willing to pay more for the experience of watching their team in person can be considered more die-hard. To that end, we looked at the average ticket prices and concession stand prices for each NFL team.

We also wanted to reward fans who continue to show up even though their chances of seeing their team pull off a victory is on the low side. So we looked at the attendance rate for each team over a five-year period from 2011 to 2015 and compared it to the teams’ win rates for that same time period. To see where we got our data and how we analyzed it, read the data and methodology section below. 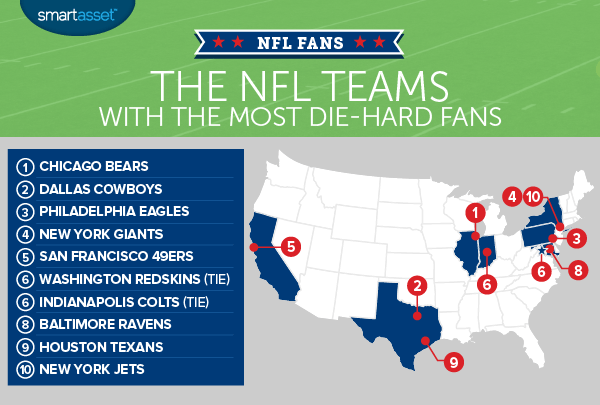 Bears fans nabbed the top spot in our ranking mostly due to their impressive attendance rate in the face of high ticket prices and a fairly low win percentage. Supporters of “da Bears” (as they are known to longtime “SNL” viewers) have to pony up $108 on average for a ticket. That’s the fith-highest price in the league, according to our data. And they’re more likely to witness a loss than a win, as the Bears had only a 46% win rate over the time period we considered. Sadly, early injuries to starting quarterback Jay Cutler and starting running back Jeremy Langford, combined with a poor start to the 2016 season mean the Bears and their die-hard fans may be in for another long Super Bowl hibernation.

America’s Team climbed to second in our rank due to mediocre on-field success mixed with expensive ticket and concession prices. The cheapest soda someone can find at a Cowboys game is $6 for 20 oz and the average ticket costs $110. In spite of the high prices, Dallas fans still flock to AT&T Stadium at a 101.8% attendance rate. Cowboys fans will be hoping fantasy football darling Ezekiel Elliot is able to carry the load this season while star receiver Dez Bryant and the oft-injured Tony Romo get back to health.

Eagles fans have been on a bit of a roller coaster recently. After two straight successful campaigns under Chip Kelly in 2013 and 2014, Eagles fans may have thought they were on their way to something promising, utilizing his fast-faced attack. Alas, it was not to be. In 2015 the team finished with a losing record and Kelly was fired. Still many fans are no doubt wondering if this is their year as the team is off to an impressive start under new head coach Doug Pederson.

Giants fans have to pay an eye-watering $123 per ticket on average – the highest in the league – to see their team throw the pigskin. So it’s just as well they can enjoy a 12 oz beer for $5. That price might strike New Yorkers as suspiciously low, but a little research shows a Bud Light Beer Garden on MetLife stadium’s premises where tailgaters can snag cheap beer before kickoff. Despite the team’s 38% win rate for the five-year period we analyzed, fans managed to fill 93% of seats on average.

As the winners of five Super Bowl championships, the 49ers have one of the proudest traditions in the NFL. But the team has fallen on hard times recently and hasn’t posted a winning record in the past two years. Many are likely waiting to see if former Eagles coach Chip Kelly can right the ship. In the meantime, fans have to pay the second-highest beer price in the league ($10) and the third-highest ticket price ($117 on average). None of that has prevented the team from earning a solid 100.9% attendance rate.

Related Article: The Cities With Too Many (or Too Few) Sports Teams

Washington fans have also suffered from a few brutal losing seasons recently, including a particularly bad 3-13 record in 2013. Despite that, fans still flock to the stadium filling it to 89% capacity on average.

There’s no doubting Colts fans’ dedication. They have the highest average attendance rate in the league at 103.9%. The on-field performance hasn’t quite matched fan enthusiasm. The Colts only won 53% of their games over the five-year period we researched. The reason they aren’t ranked higher in our study is because, compared to other NFL outings, it’s relatively inexpensive to see star QB Andrew Luck and his team. Ticket prices average $87 and a beer-soda-hot dog combo will set you back less than $18.

The Ravens have lost some of their mojo since Ray Lewis retired after their 2012 Super Bowl victory over the 49ers. Ravens fans pay the eighth-highest ticket prices and face the third-highest concession prices. But the team still boasts a 100% attendance rate.

The Houston Texans are the most recent team to join the NFL as a reincarnation of the Houston Oilers. Fans seem happy to have a team back in the city because according to our data they have the eighth-highest attendance rate in the league.

The Jets have long been in the Patriots shadow when it comes to AFC East dominance. But despite the lack of success, Jets fans still venture out to New Jersey to see their team in person. High prices are the norm in the New York region and tickets to see the Jets play are no exception. On average fans pay $105 per ticket.

To determine the NFL teams with the most die-hard fans, we gathered data on the following factors: