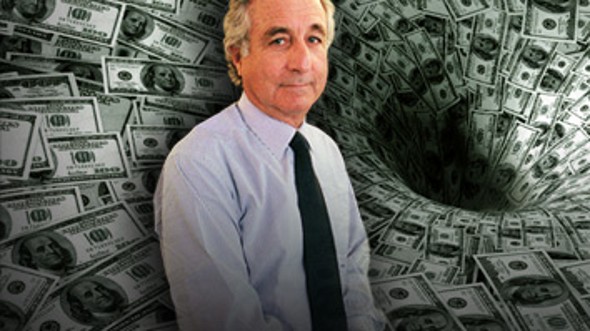 Wall Street bigwig Bernie Madoff became infamous several years ago when a fraudulent securities operation he was running collapsed and cost his investors, including hospitals and charities, $17.3 billion. While Madoff’s crime may have been the largest-ever scam of its type, he certainly didn’t invent the method–he ran a Ponzi scheme, named after 1920s swindler Charles Ponzi. Nor was the Madoff scandal by any means the greatest damage a single individual has ever done to an economy – while those billions were a relatively small share of the $14.2 trillion GDP of the United States in 2008, other crises set off by one person ruined whole countries for years. Here are the stories of Ponzi and three others who brought down economies by sheer force of will. To make sure your money is protected, consider working with a licensed or certified financial advisor. 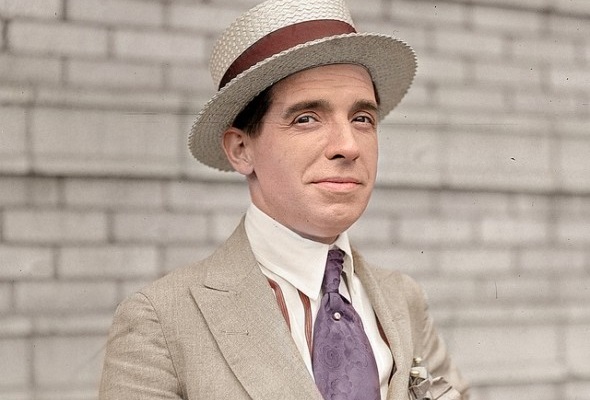 Italian-born Carlo Pietro Giovanni Guglielmo Tebaldo Ponzi immigrated to Boston in 1903 as a broke 21-year-old. He fell in with fraudsters working at a Montreal bank that preyed on other Italian immigrants, did prison time for smuggling people across the US border, and corresponded with gangsters.

His big break came after yet another failed venture–by chance, he opened a letter from a Spanish company inquiring about a catalog he started that had gone bankrupt and saw an international reply coupon was enclosed. Ponzi realized that the reply coupons, which were redeemed to pay the cost of international postage, could be bought cheaply in Italy given post-World War I inflation and then resold stateside. Ponzi made the audacious claim that he could double his investment in 90 days, and thus the first-ever Ponzi scheme was born.

He bought out the bank he was storing his profits and convinced his investors not to cash out, while in fact running his business at a huge loss. When reporters discovered that Ponzi’s claimed profits were impossible–among other things, only 27,000 reply coupons were even in circulation even though Ponzi had supposedly sold 160 million of them to his customers–the bottom dropped out, causing the collapse of five banks and the loss of $20 million in investments. That’s the equivalent of about $334 million today.

Unrepentant to the end, Ponzi served three and a half years in federal prison before being released on bail. He then tried to flee the country posing as a steamship crewman and got involved in real estate fraud selling Florida swampland. In his final interview before his death, Ponzi said “Without malice aforethought, I had given them the best show that was ever staged in their territory since the landing of the Pilgrims! It was easily worth fifteen million bucks to watch me put the thing over.”

Related Article: Does Studying Economics Make You a Bad Person? 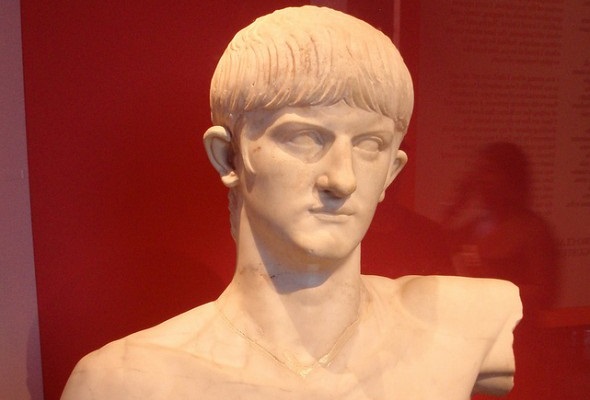 The last Julio-Claudian emperor of Rome’s name is a byword for excess even today. The true stories about him are just as wild as the myths and rumors.

Most infamous of all is the tale about how he “fiddled while Rome burned,” which is now a proverb for frivolous inaction in the face of disaster. The fact is the violin hadn’t been invented yet, but he likely played the lyre as he watched the blaze, and, perversely, sang a song about the destruction of Troy.

Christian insurgents were long blamed for the fire. The emperor subjected many adherents of the new religion to show trials before crucifying them or burning them at the stake. However, it is much more likely he organized the arson himself.

While ten percent of Rome was in ashes, and thousands of people had lost all their possessions, Nero’s post-fire urban redevelopment plan incidentally included a lavish new palace for himself. It was spread over hundreds of acres and capped off with a colossal golden the statue of himself. To pay for this, he imposed crushing tributes (basically a form of tax) on the provinces, thus spreading the financial devastation far afield from the Mother City.

These policies debased the value of Roman gold and silver coinage, and the actual precious metal content in each coin was slashed by 12 to 15 percent. All in all, a conservative estimate for the value of the Roman treasury he depleted is about $4 billion in today’s money. Not for nothing is Nero often identified with the Antichrist in the Book of Revelation–“Neron Kaisar,” the Greek spelling of his name, adds up to 666 in Jewish numerology. 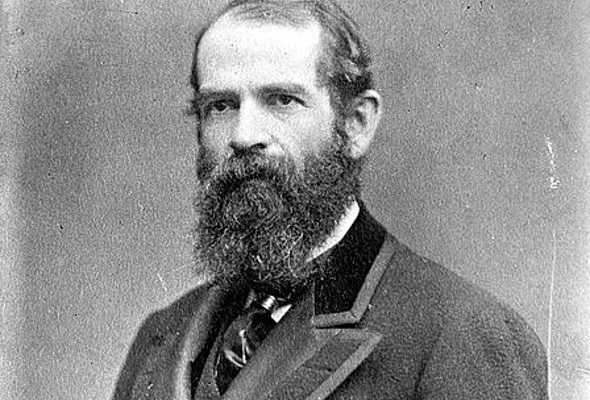 A dilettante of the first order, Jason “Jay” Gould was involved in the blacksmithing and tanning businesses and had been a surveyor, mathematician, and historian before becoming involved in the booming field of railroad speculation in the 1860s. His dealings with the monumentally corrupt New York political boss, William Tweed of Tammany Hall, made him infamous as a robber baron, and Thomas Nast pilloried him in his political cartoons. But his partnership with similarly unscrupulous financier “Diamond Jim” Fisk sealed Gould’s reputation as one of the all-time villains of American capitalism.

After the Civil War, the United States government began selling public debt en masse to finance the reconstruction of the South. In a pre-fiat money era, the debt notes were backed by gold. Gould and Fisk saw an opportunity to corner the gold market and thus profit directly off Uncle Sam. Gould bought up gold starting in the summer of 1869 and refused to sell any of it, driving up prices. He had President Ulysses Grant’s brother-in-law convince the president not to sell off government gold yet, and US Assistant Treasurer Daniel Butterfield agreed to tell Gould precisely when the Treasury Department would put the gold on the market.

On September 24, gold prices were 30 percent higher than when Grant became president, and Gould and Fisk got their tip-off from Butterfield. They sold their reserves, and then the government gold was put up for sale, causing the price to nosedive from the massive supply increase, ruining thousands of investors in minutes.

The dizziest heights of Black Friday saw $20 Double Eagle gold pieces traded at $162 each; by the end of the day, the premiums were almost nil, meaning the price of one coin fell $142. The $4 million in coins that the government put on the market thus caused $28,400,000 in lost investments, or about $490 million today.

It would be another hundred years before gold prices exceeded the highs of that day, and it remains the most precipitous gold price drop in American history. Gould showed total disdain for everyone he came across in the business world, wholeheartedly believing in his own superiority. He famously once said, “I could hire half the working class to kill the other half.” 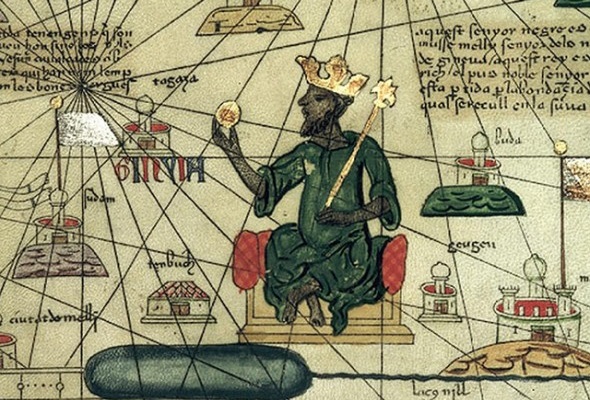 The extraordinary thing about King of Kings Musa I of the Malian Empire, one of the richest people in history, is that for all the financial catastrophe he left in his wake, he might have been completely selfless in his intentions.

Musa was a royal advisor to his predecessor. He became king when the previous ruler went on an expedition to cross the ocean and never returned. A devout Muslim, Musa saw it as his duty to make the hajj, or pilgrimage to Mecca, in 1324. One of his titles was “Lord of the Mines of Wangara,” and from those mines and many others, the Malians derived an almost inconceivable amount of gold.

Musa’s pilgrimage caravan included 60,000 companions, 12,000 slaves carrying 4 pounds of gold each, and 80 camels laden with 50 to 300 pounds of gold each. Five hundred of Musa’s servants also rode before him each carrying a 10.5-pound gold staff. Though Musa had more gold than he could have possibly spent on his journey, that didn’t stop him from making an effort.

He gave beggars huge ingots, overpaid at bazaars and tipped with fistfuls of gold dust. Musa also reportedly ordered a new mosque built for him to pray at every Friday. In addition, he made formal charitable donations of 20,000 ounces of gold – 1,250 pounds – each at Cairo, Mecca, and Medina.

The instantaneous and incalculable influx of gold into Cairo, Mecca, and Medina caused hyperinflation the likes of which had never been seen before or since, and nearly impoverished all three great cities for over ten years. Assuming a roughly equal distribution of the total gold load across all those aforementioned camels, Musa made at least 71,000 pounds of gold basically worthless by just plumb giving it away into climates that considered it scarce and valuable. This means in terms of gold devaluation alone the damage Musa’s pilgrimage caused amounted to $1.5 billion in modern money.

Since we have so little documentation of the time period, it is perhaps equally likely that the king was simply a pious and overgenerous soul who thought he was fulfilling Islam’s command to charity, or a shrewd thinker who sought to pass on the potential inflation from Mali’s giant gold supplies to rival kingdoms.

The Villains of Economic History 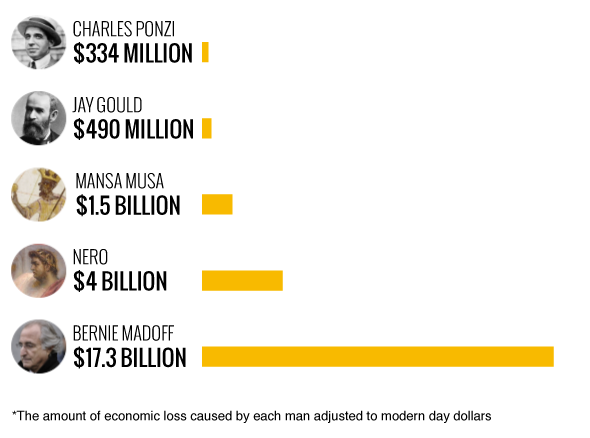 All in all, these four individuals were truly outliers of history. They deeply impacted the economic systems of their time. When we compare the present-day value of the crises they caused, the numbers are impressive. Charles Ponzi caused the loss of the equivalent of $334 million today, Jay Gould $490 million, Mansa Musa at least $1.5 billion and Nero lost around $4 billion. Even in modern-day figures, they pale in comparison to the $17.3 billion Madoff lost. But Madoff’s impact was not as great as that of the other men.

For all of the ruin that Bernard Madoff precipitated, he managed to harm essentially only his investors. The collapse of his investment scheme was never considered a threat to the fiscal health of the US as a whole, and most Americans heard about Madoff’s downfall on the news, sighed and shook their heads, and found their bank accounts the same as they were before.

But the people on this list had a greater degree of control over the economies they destroyed. Thus, their actions had decades-long repercussions on the fiscal climates of entire regions of the world. With much larger, spread out, and more diversified economies, it would be nearly impossible for anyone to match the destruction those crises caused today.

There have been some big fraudulent movements over the years that have cost investors quite a bit of money because they believed them to be legitimate. It’s important that you always invest in legitimate deals and the best way to ensure this is to work with advisors who are considered reputable and safe. There is no way to fully protect yourself but there are plenty of precautions you can take to make the chances of falling victim to a Ponzi scheme really low.

Tips for Dealing With a Financial Crisis