The Best Cities for New College Grads in 2019 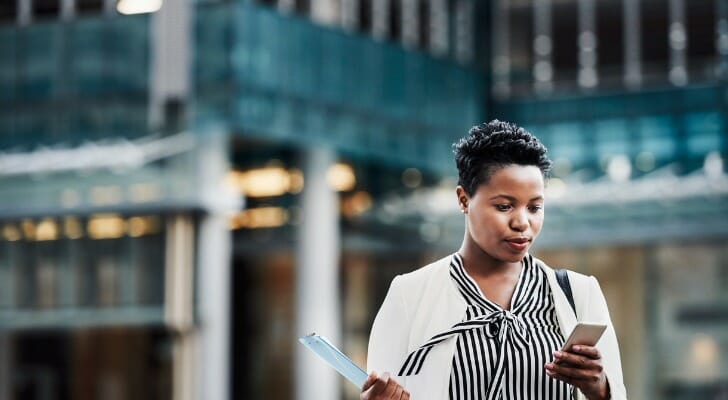 Once you’ve put in the work to get a degree, you’ve got a big decision ahead of you: Where to start your career? For those who have the ability to relocate, choosing the right city can make a big difference. Some likely considerations are the cost of living and the strength of the job market. After all, you need to save enough to help you pay off those student loans. You probably also want to live in a place with people your age and things to do. We considered all of these factors and more to create this list of the best cities for new college grads.

This is SmartAsset’s fifth annual edition of the best cities for college grads. You can read the 2018 study here.

SmartAsset created this list by looking at data for 108 of the largest cities. We looked specifically at 10 metrics across three categories: jobs, fun and affordability. Our job score for a city includes the overall unemployment rate, the unemployment rate for those with a bachelor’s degree, average earnings for college graduates and the number of job listings on Indeed. The affordability score considers cost of living and monthly median rent costs. To measure fun, we looked at the concentration of entertainment and dining establishments, the percentage of the population between the ages of 20 and 29, the average Yelp rating for bars in the area and the average Yelp rating for restaurants in the area. You can learn more about our data sources and how we created the final ranking in the Data and Methodology section below. 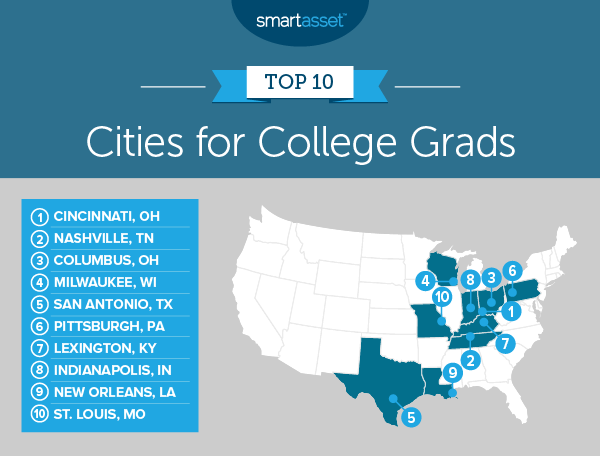 After falling to second place last year, Cincinnati, Ohio has once again claimed the top spot for new college grads. One big reason Cincinnati is number one is its affordability. It has the fourth best score in our affordability index. One contributing factor is the monthly median rent of just $585. That’s third lowest in the entire study. The city also has the 11th-lowest cost of living, based on data from MIT. This relative affordability makes it easier to pay off student loans and look ahead to other financial goals, like saving for retirement. If you’re in Cincinnati, you’ll probably find like-minded individuals to help keep you on track. Nearly 20% of the population is in its 20s. That’s the 14th-highest rate in the study.

Our data shows that Nashville, Tennessee, also known as Music City, U.S.A., is one of the most fun cities for recent college grads. Nashville ranks fourth in that category. More specifically, the city has the seventh-highest concentration of entertainment and dining establishments. Coupled with the fact that 18.2% of the population is in its 20s, there should be plenty to do for college grads looking to enjoy their free time. Nashville’s affordability, however, is relatively low this year. The city ranks in the middle of the pack for both metrics of monthly median rent ($928) and the overall cost of living.

Columbus, the second Ohio city in our top 10, comes in third. While not quite as affordable as Cincinnati, Columbus ranks in the top 25 for affordability. It also ranks in the top 25 in our jobs category. Not only are there a lot of available jobs – the 26th most in our study – but unemployment is also relatively low. The overall unemployment rate is less than 4%, and those with a bachelor’s degree have an unemployment rate of just 2%. When it comes to jobs, we’ve previously seen that Columbus is an especially good city to work in tech. There is also plenty of opportunity for fresh college grads to make new friends, with 19.90% of the city’s population being in its 20s. That’s the 11th-highest rate out of the 108 cities that we considered.

Milwaukee, Wisconsin rises in the ranks for the third straight year, claiming the fourth spot for 2019. College grads in the city shouldn’t have too hard of a time finding a job. The unemployment rate for bachelor’s degree holders is just 1.90%. That’s the 15th-lowest rate in the study. It’s also relatively easy to find affordable housing in Milwaukee. The median rent of $686 per month is the 16th-lowest of the cities we looked at. With any luck, college grads can turn that affordable housing into some savings. And if you’re looking to have some fun outside of work, Milwaukee has lots of potential. Its overall score for fun in our study ranks 15th-best. We found that approximately 18% of the population is in its 20s. The city also ranks in the top third of the study for both its concentration of bars and its concentration of entertainment and dining establishments.

The westernmost city in our top 10, San Antonio, Texas moves up one spot from last year. It owes its spot in the top five to above-average scores in nearly every metric. There are a lot of jobs, and unemployment is low. Just 3.20% of the overall population is unemployed and bachelor’s degree holders fare even better with an unemployment rate of 2.40%. Overall, San Antonio ranks 17th for our jobs category. It also ranks in the top 25 for our affordability category. The cost of living, which comes in only eight percentage points above the national average, is 18th-best in the study. The median apartment costs $788 each month. Of course, another plus is the fact that Texas has no state income tax.

Pittsburgh, Pennsylvania ranks in our top 10 for the fourth straight year, thanks largely to strong scores in the fun and affordability categories. The data shows that 24.50% of the Steel City’s residents are in their 20s. That’s the third-highest amount in our study. And if you’re looking for something to do with your friends, you’ll be glad to know that 10% of the city’s establishments are dedicated to entertainment and dining. Having some fun while living here probably won’t break the bank either: The median monthly rent in Pittsburgh is less than $800 per month and the city has the ninth-lowest cost of living out of the 108 cities we looked at. Life isn’t all fun and games, though, so luckily Pittsburgh does well in the jobs category. It has a top-25 score for its high number of job listings. The unemployment rate for those with a bachelor’s degree is just 2.20%.

Lexington, Kentucky has the 17th-best affordability score in our study. It has the 16th-lowest cost of living and Census data shows that the median monthly rent is $711. That’s the 25th-lowest rent figure in our study. We recently found that this affordability is a big part of why Lexington is the country’s most affordable city for an early retirement. But before you can think about retirement, you will need to earn yourself some money. While Lexington doesn’t have a fantastic score for the number of job listings in the city, it does have a low unemployment rate. Unemployment is 2.9% overall in the city (the 18th-lowest rate) and 1.7% for residents with a bachelor’s degree (the 10th-lowest rate). Fresh college grads may appreciate the fact that more than 18% of the city’s population is between the ages of 20 and 29. Lexington ranks 26th in that metric. It also ranks 26th for its high concentration of bars, at 3.65% of all establishments. There’s more to do than just drink, though. About 10% of all establishments there are dedicated to entertainment and dining.

Indianapolis, Indiana ranks in the top third of the study for the number of available jobs and for the low unemployment. Residents with a bachelor’s degree have an unemployment rate of just 2.20%. As for affordability, Indianapolis ranks 22nd overall in that category. The rent is $701, which is the 19th-lowest monthly median rent in the study. Hopefully recent college grads can use the money they don’t spend on housing to pay off loans or to build savings in one of Indianapolis’ best banks. Once you’ve put aside some savings, don’t forget to explore the high concentration of bars and restaurants in the city. You should also be able to find a partner in crime to explore with since more than 16% of the city’s residents are in their 20s.

Perhaps unsurprisingly, a major reason New Orleans, Louisiana is in the top 10 is that it scores well in our fun category. The Big Easy ranks 13th overall for fun. Most notably, it has the highest concentration in our study for entertainment and dining establishments. It also ranks in the top 15 for its concentration of bars. After enjoying alcohol, jazz and beignets over the weekend, it’ll be time to start a new work week. The city has an above-average score for the number of available jobs. The unemployment rate of 1.8% for residents with a bachelor’s degree is the 12th-lowest in the study. And for the entrepreneurial college grads, New Orleans is also one of the cities with the lowest startup costs.

Claiming a spot in the top 10 for the third straight year is St. Louis, Missouri. One reason is the ninth-lowest rent figure in the study. Census data shows that the monthly median rent in the city is $618. Its relatively low cost of living also ranks in the top third. Paying that rent without too much difficulty would likely be relatively feasible, since the city has the 16th-highest number of available jobs in our study. The unemployment rate for bachelor’s degree holders in St. Louis (2.30%) is less than the unemployment rate for the general population in the city (3.7%). And when you aren’t working, you may enjoy spending time with people your own age. Lucky for you, 17.80% of the St. Louis population is in its 20s. And while the city doesn’t rank particularly well for its concentration of bars and entertainment establishments, it does have the 26th-highest concentration of restaurants of all the cities in our study. 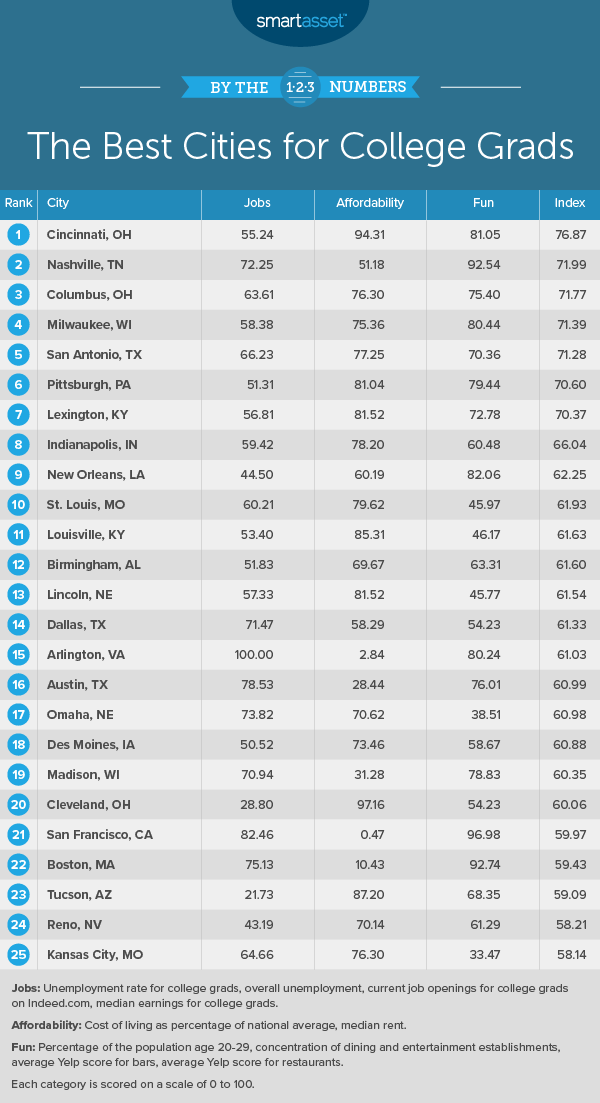 To determine the best cities for new college grads, we considered the 108 largest cities for which we had data. The data we looked at fell into three categories and included 10 individual metrics. Specifically, we looked at the following: