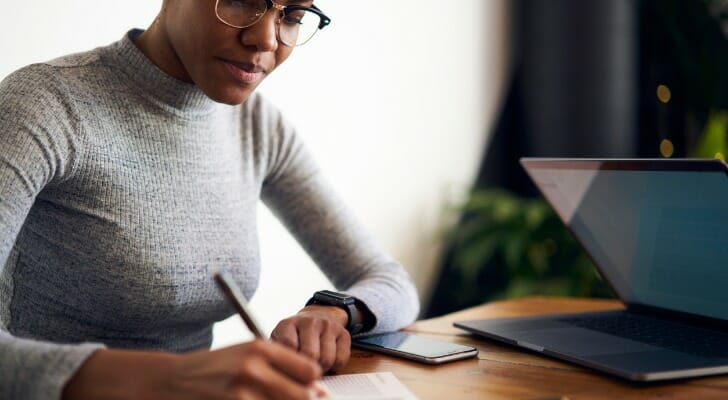 Famously, Apple started out of a garage with little up-front cash. But your typical startup requires more than just a some empty space and a brilliant idea. To create a successful company, you need some money to pay for office space, employees and everyday bills from utilities to legal fees. This can dampen entrepreneurs’ ability to bring their business ideas to life especially if they don’t have much capital in their savings account. Imagine trying to start a new company in San Francisco with its exorbitant cost of living. Below we look at a slew of factors to rank the cities with the lowest and highest startup costs in the country.

To rank the cities with the lowest startup costs we looked at data on a variety of metrics that affect businesses. We looked at the cost of filing fees, office space rentals, utilities, lawyers, accountants and payroll for five employees. For a more detailed breakdown of our methodology and sources see our data and methodology section below.

This is our fourth annual look at startup costs. Read the 2017 version here. 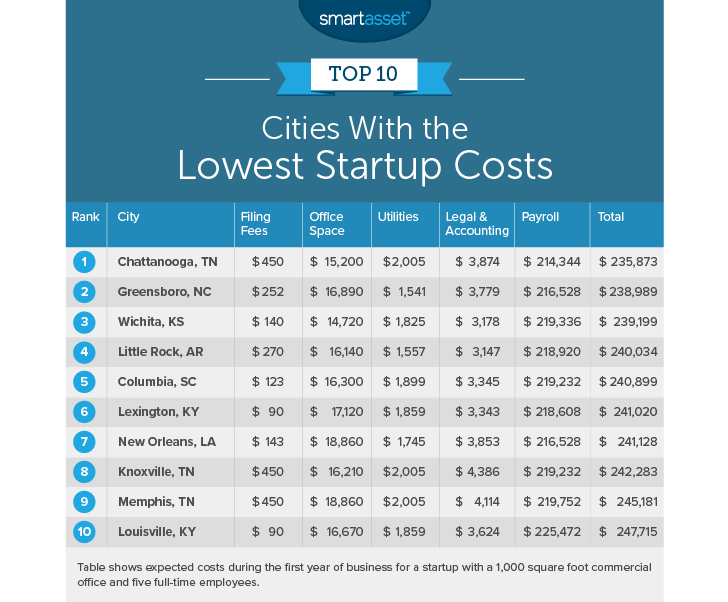 Chattanooga, Tennessee is the most affordable place to start a company, according to our data. Office space here is affordable and hiring workers for your business won’t bankrupt you, at least right away. We estimate payroll for five employees will cost just over $214,300 per year. Combine payroll with renting an office and paying your lawyer and accountant and we estimate the annual cost of running a new business in Chattanooga to be about $236,600 per year.

Another city in the South offers companies competitive rates for starting businesses. Last year we estimated payroll for five employees would cost $213,400 per year. Now that figure has jumped up to $216,500, good news for employees but less good news for business owners. Regardless, Greensboro occupies the second spot. If you are attracted by the affordability of starting a business here, it may make sense to start one that targets the textile industry. Occupations like upholsterers and textile bleaching and dying machine operators are more than 20 times more common in Greensboro than they are in the rest of the county.

Kansas’ largest city comes in third. Filing fees here are some of the lowest in the top 10 at only $140. The cost of renting an office is also very reasonable. According to our research 1,000 square feet of office space should cost about $14,720 per year. Even the cost of lawyers and accountants is lower than in the two cities ranked above. Wichita falls to third because of payroll costs. Five full-time employees will cost over $219,300 on average, the Bureau of Labor Statistics estimates.

According to our data, Arkansas’ capital has some of the lowest startup costs in the country. In all but one metric, filing fees, Little Rock is more affordable than average. And while filing fees in Little Rock may be higher than average, it’s unlikely your business will succeed or fail based on the cost of filing fees. In particular, labor costs here are affordable. The annual cost of five full-time employees is about 15% less than the study average.

Another capital claims a top 10 spot. We estimate that it would cost just under $241,000 to get a startup off the ground in Columbia. The vast majority of that cost would come from hiring a full-time workforce. We estimate the cost of five full-time employees to be $219,200 per year. Other important costs include office space and legal and accounting costs. Combined those two metrics eat up another $20,000 in the annual budget for a startup.

Coming in sixth is Lexington, Kentucky. This city has consistently ranked in the top 10, scoring no worse than eighth in the past four years. This city shares the lowest filing fees in the top 10 with its Kentucky cousin, Louisville. But filing fees are not what usually makes or breaks a new company. Labor costs and office space costs are where most of the damage to the bottom line happens. Hiring labor in Lexington is relatively affordable. We estimate five full-time employees will cost about $218,600 on average.

Running a five-person startup in New Orleans, Louisiana will cost about $241,100 on average, our data reveals. Of course, that can all change based on what kind of business you are running. If your business is heavy on software developers for example, it will likely cost more. The average software developer in New Orleans costs about $76,000 per year compared to $43,300 for the average worker. New Orleans also has high property costs, relative to other cities in this top 10. Renting 1,000 square feet of office space will cost nearly $19,000 per year.

Taking the eighth spot is Knoxville, Tennessee. Legal and accounting costs here are higher than the national average, hurting the city’s score. Filing fees and utility costs are also fairly high relative to those of other locations in our top 10. Where Knoxville jumps ahead of other cities is in the cost of office space. According to our data 1,000 square feet of office space should cost just over $16,210 per year. After factoring everything together, we estimate the cost of running a startup for one year to be about $242,300.

Memphis comes in ninth, but with a fairly large gap between it and Knoxville in eighth. The different between running a five-person team in Knoxville and Memphis is about $2,900. But Memphis still cracks the top 10, with the annual cost of starting a business at just under $245,200. One reason Memphis falls to ninth is office space cost. This city has the most expensive office space in the top 10, tied with New Orleans.

Louisville, Kentucky ranks well above tenth in all but one metric. Unfortunately for Louisville business owners, the metric Louisville falls behind in is also the most impactful on the bottom line. The cost of five full-time employees in Louisville is about $225,500. Thus, labor costs in Louisville are about $6,000 more per year than the city with the second-highest labor costs in our top 10. 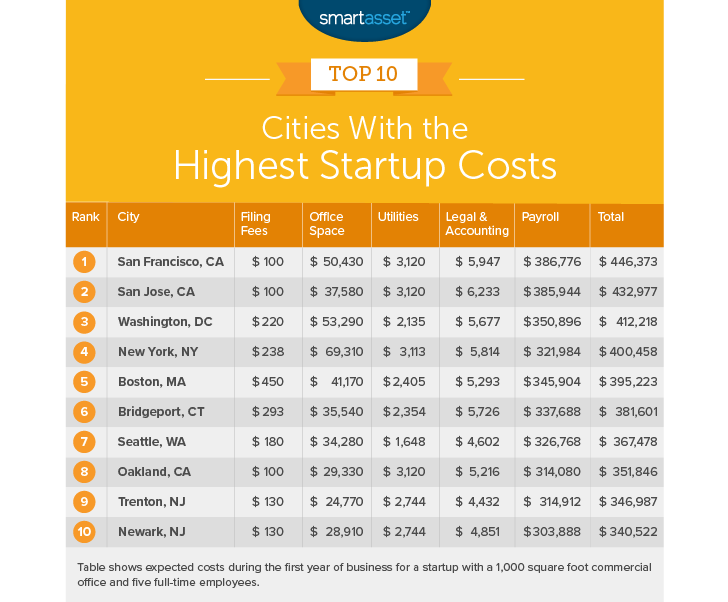 In order to create our ranking of the cities with the highest and lowest startup costs, we looked at data on 80 cities. Specifically, we tallied costs along the following five metrics:

Tips for Managing Your Investments