Tax Refunds in America and Their Hidden Cost – 2020 Edition 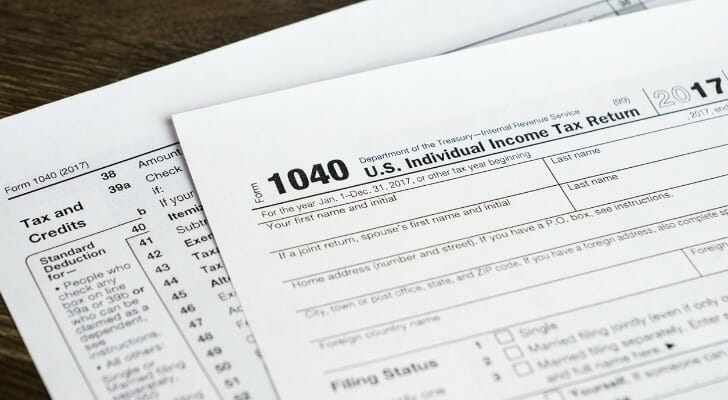 About three in four Americans receive a tax refund each year, and the average amount returned with those refunds is around $3,000, according to IRS data. This means that for many Americans, their tax refund is the largest single check they will receive all year, substantially affecting the trajectory of how they use or save their money before the next tax day. Though often anxiously awaited, tax refunds come with a major cost.

In this study, we looked at some of the national and state trends in tax refunds over the past five years along with what you lose by waiting for a tax refund. For details on our data sources and how we put all the information together to create our findings, see the Data and Methodology section below.

Americans are getting smarter about paying their taxes more accurately throughout the year, rather than overpaying and waiting for refunds at tax time. Between 2013 and 2017, IRS data shows that the total amount refunded to Americans nationwide fell by about $2 billion. As noted in our first key finding, the percentage of tax returns with refunds has also steadily decreased over the past five years, along with the total amount refunded. All told, 76.3% of Americans filing in 2013 received a tax refund while 74.4% of Americans had refunds in 2017 – a decrease of 1.9%. 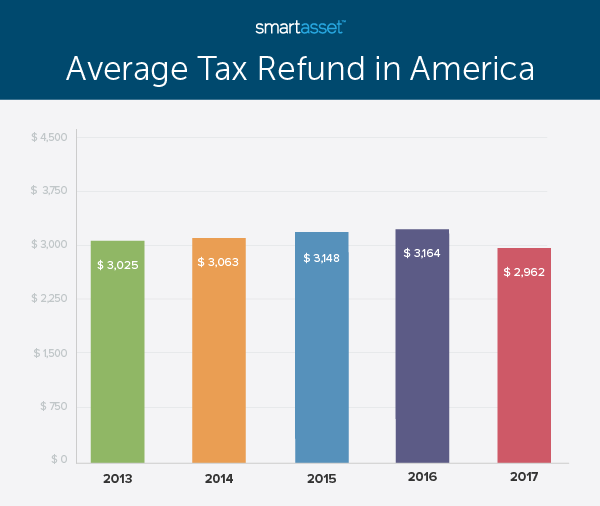 The 10 states with the lowest average tax refund are all in the Midwest and West. Wisconsin, Minnesota, Ohio and Iowa have the third-, seventh-, eighth- and ninth-lowest average tax refunds, respectively, between 2013 and 2017. The Western states of Montana, Oregon and Idaho also have low average refunds. Over the five-year period we analyzed, the average refund in all three states was about $2,500.

The average tax refund has not decreased uniformly across states. In fact, between 2013 and 2017, the average tax refund increased in 23 states. Alaska and Delaware saw the largest percentage increases, with the average tax refund for filers rising by 5.73% and 4.53%, respectively. In Alaska, the total amount refunded remained consistent across years, hovering around $760 million, but with 15,000 fewer taxpayers there receiving refunds in 2017 than in 2013, the average refund among per return increased over time. However, the number of Alaskan taxpayers with refunds dropped from more than 265,000 in 2013 to about 250,000 in 2017. By contrast, the rise in the average tax refund in Delaware may be more attributed to an increase in the total amount refunded, as the number of returns with refunds remained consistent. Close to $985 million was refunded in 2017 compared to about $918 million in 2013.

Economists often refer to tax refunds as interest-free loans to the government. That is, taxpayers who receive a refund effectively grant the IRS money beyond what they actually owe in taxes throughout the year, but they receive only that same amount of money back after filing. Over the time elapsed, taxpayers could have invested the money or paid down their debt instead. The matrix below shows how much an individual gives up by lending money to the government instead of adding it to a savings account, investing it in the S&P 500 or paying down credit card debt. 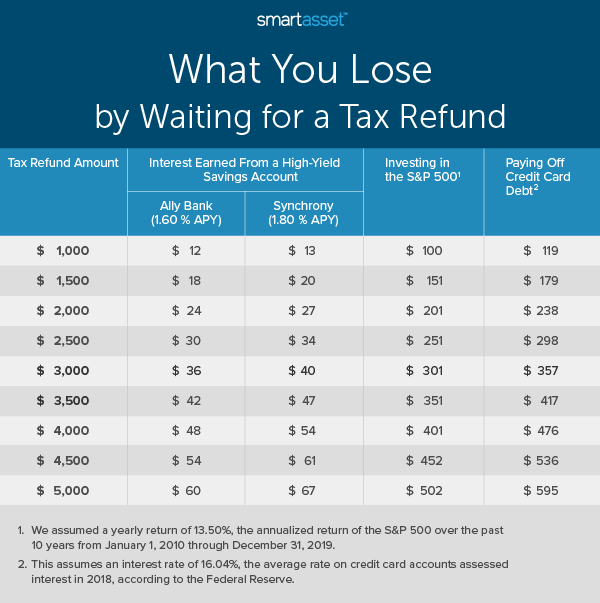 Savings accounts are offered by most financial institutions. In the above table, we look at two of our best savings accounts for 2020: Ally Bank and Synchrony High Yield. As of December 2019, Ally Bank had an annual percentage yield (APY) of 1.60%, while Synchrony High Yield had an APY of 1.80%. An individual with a tax refund of $3,000 who would have added that money to Ally or Synchrony cost themselves between $36 and $40 by withholding too much money for taxes throughout the year.

Investing one’s money in the stock market may lead to a greater financial reward, but that also comes along with greater risks. Though the S&P 500 rose by almost 30% in 2019, it fell by close to 40% in 2008 during the Great Recession. Due to variance between years, the above calculation uses the annualized return of the S&P over the past 10 years, 13.50%. If an individual with a tax refund of $3,000 put $250 every month in an index fund tracking the S&P, it would be worth about $301 more on April 15.

Individuals with credit card debt may lose the most by waiting for a tax refund. According to the Federal Reserve, the average rate on credit card accounts assessed interest in 2018 was 16.04%. By paying down credit card debt throughout the year, a taxpayer with a refund of $3,000 could save more than $350 by avoiding debt interest. Moreover, unlike investing in the stock market, there is no risk in paying down debt.

Though in all cases (assuming the stock market has a positive year) individuals may save more by having a tax refund of $0, not everyone may be able to do this. Low- and middle-income families receiving the Earned Income Tax Credit (EITC) or Child Tax Credit (CTC) effectively have to receive a large tax refund since these credits are issued as part of the refund.

Data in the Financial Cost section relies on several assumptions, which may vary depending on the taxpayer’s situation. All four calculations assume that the tax refund was spread out evenly across the year (i.e. one-twelfth of the tax refund was received at the end of January, one-twelfth was received at the end of February and so on). Additionally, we assumed that the taxpayer received his or her refund on April 15, though some taxpayers may receive their refund earlier – or later, if they file for an extension.

Ally Bank and Synchrony High Yield were selected for the two savings account calculations as they are two of our best savings accounts for 2020. For the S&P 500 calculation, we assumed a return of 13.50%, which is the annualized return between January 1, 2010 through December 31, 2019, including dividends. This calculation does not account for taxes or fees. Finally, data for the credit card debt calculation comes from Federal Reserve’s 2018 Consumer Credit report.