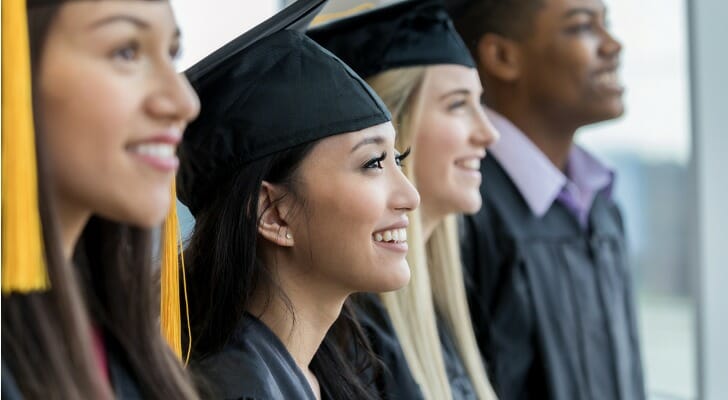 Graduating from college is a major milestone, signaling the start of a new phase of life. Though many college seniors have seen their final semester on campus derailed by the COVID-19 pandemic, they will still emerge into post-college with the same hopes and dreams that generations of students before them have held. For many graduates, the first few years after graduation could substantially affect the ability to buy a home or save adequately for retirement. Choosing where to live is not a decision to take lightly, which is why SmartAsset crunched the numbers and found the top 10 cities for new college grads.

To find the best cities for new college grads, we analyzed data for the 115 largest U.S. cities, looking specifically at 10 metrics across three categories: jobs, affordability and fun. Our job score includes overall unemployment rate, unemployment rate for bachelor’s degree holders, average earnings for college graduates and number of job listings on Indeed. Our affordability score includes median monthly rent and cost of living. Our fun score includes dining and entertainment establishments as a percentage of all establishments, percentage of the population from the ages of 20 to 29, average Yelp rating for restaurants in the area and average Yelp rating for bars in the area. For details on our data sources and how we put all the information together to create our final rankings, check out the Data and Methodology section below.

This is SmartAsset’s sixth study on the best cities for new college grads. You can find the 2019 version here. 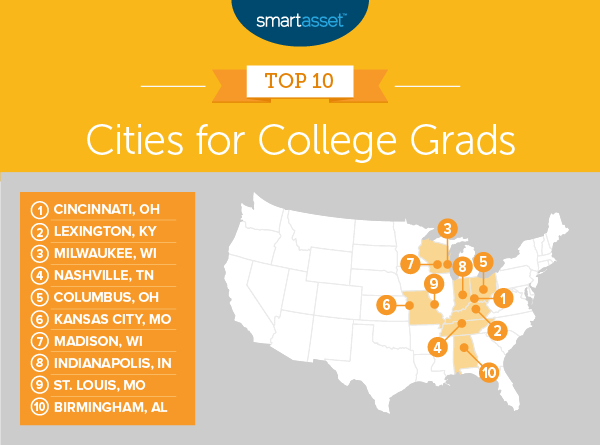 For the second year in a row, Cincinnati, Ohio ranks first in our study on the best cities for new college grads. The city has the eighth-highest affordability score overall, with the seventh-lowest median monthly rent in the study, at just $633. Cincinnati also ranks sixth-highest overall for the category of fun, ranking particularly well for its high average Yelp score for bars: At 3.97 out of five stars, it has the third-highest Yelp ranking across all 115 cities for which we considered data.

Lexington, Kentucky has the seventh-best fun score and the 17th-best affordability score in the study. Within the category of fun, Lexington placed seventh overall for average Yelp restaurant rating, at 4.08 out of a total of five stars. Within the affordability index, Lexington placed 10th out of 115 for low cost of living. The cost of living in Lexington is $19,526, potentially allowing for more opportunities to save or invest.

Milwaukee, Wisconsin has the 13th-best fun score and the 28th-best affordability score of the 115 cities we analyzed in this study. Milwaukee’s relatively high ranking for the category of fun is due in part to the fact that it has the 12th-best average Yelp rating for bars in the study, at 3.94. The city does well in the affordability category partly because median monthly rent is $708, the 18th-lowest amount for this metric in the study.

Nashville, Tennessee ranks third for the category of fun and 10th for the category of jobs. Of all establishments in the city, 13.19% are for dining or entertainment, the eighth-highest percentage in the study for this metric. Nashville’s strong jobs score includes the fourth-lowest unemployment rate overall, at 2.5%, and the 10th-lowest unemployment rate for bachelor’s degrees holders, at 1.5%. Music City also ranks as one of the best cities for young professionals.

The fifth-best city for new college grads, Columbus, Ohio ranks ninth of 115 total cities in the category of fun and 32nd in the category of affordability. The city has the ninth-best average Yelp rating for restaurants, at 4.07. Furthermore, the percentage of the population made up of people ages 20 to 29 is 19.40%, the 19th-highest rate for this metric in the study. When it comes to affordability, the median monthly rent in Columbus is $794, the 32nd-lowest rate overall, and the cost of living is $20,253, which is the 29th-lowest in the study.

Kansas City, Missouri ranks within the top 20% of the study for both the categories of jobs and affordability. It has the 19th-best job score in the study, in particular with the ninth-lowest unemployment rate for people with bachelor’s degrees, at 1.4%. Additionally, it ranks 21st-best in terms of affordability. The cost of living, at $19,792, ranks 17th-lowest overall. The median rent is $741 per month, the 26th-lowest rate for this metric in the study.

Although Madison, Wisconsin ranks 77th for its affordability score, it ranks second overall in the category of fun and ninth overall for its job score. Madison has the highest rate in the study for percentage of population between the ages of 20 and 29, at 27.01%. Madison also has the 15th-highest average Yelp rating for restaurants, at 4.05. Additionally, the overall unemployment rate in the city is 2.3%, the third-best rate for this metric in the study.

Indianapolis, Indiana ranks in the top 30 of all 115 cities in our study for the categories of affordability and fun. The median monthly rent in Indianapolis is $712, the 19th-lowest in the study, while the cost of living comes in 25th-lowest, at $20,165. In terms of fun, Indianapolis bars have an average Yelp rating of 4.00, the highest of any city we analyzed. Restaurants, meanwhile, have an average Yelp rating of 4.07, 10th-highest.

St. Louis, Missouri ranks 18th in the affordability category and 22nd in the fun category.  It has the ninth-lowest average monthly rent across all 115 cities we examined, at $645. Additionally, St. Louis ranks 26th-highest in the study for the percentage of its population between the ages of 20 and 29, at 18.13%.

Birmingham, Alabama ranks 30th for affordability and fun. That ranking includes the fifth-lowest median monthly rent in the study, at $619. It also includes Yelp ratings of 4.08 for restaurants and 3.96 for bars, the seventh- and ninth-best rankings, respectively, across all 115 cities for which we analyzed data.

To find the best cities for new college graduates, we examined data for the 115 largest U.S. cities across three categories that included 10 individual metrics:

First, we ranked each city in each metric, assigning equal weight to every metric except for average Yelp restaurant rating and average Yelp bar rating, which we half-weighted. Then we averaged the rankings across the three categories listed above. For each category, the city with the highest average ranking received a score of 100. The city with the lowest average ranking received a score of 0. We created our final ranking by calculating each city’s average score for all three categories.