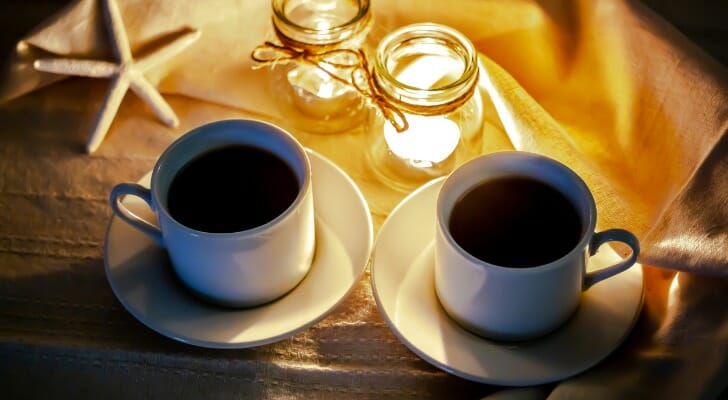 Whether you’re taking someone out for the first time or enjoying a well-earned night on the town with your partner of a decade, it’s important to be able to enjoy a nice date night. It is even better when you have plenty of options for where to go and know a night with your special someone isn’t going to break the bank. With that in mind, SmartAsset decided to find the best cities in the country for budget-friendly dating.

To find these cities, we created two indexes, one for the availability of date spots and one for affordability. For the availability index, we considered the numbers of coffee shops, restaurants, bars and entertainment options per 100,000 residents. For the affordability index, we considered the cost of two cappuccinos, two beers and a three-course meal for two at a mid-range restaurant, plus the median income after taxes and rent. For details on our data sources and how we put all the information together to create our final rankings, check out the Data and Methodology section below. 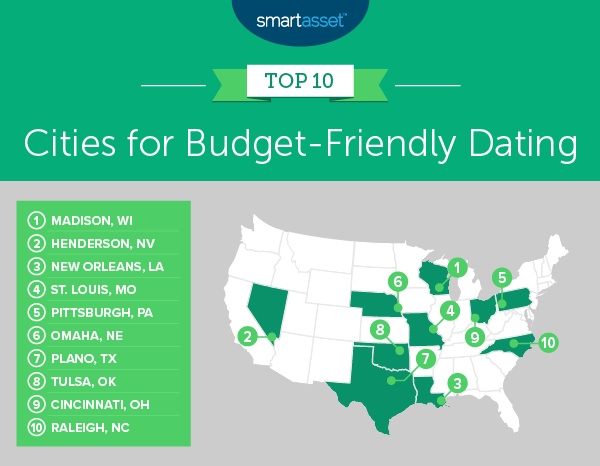 Madison, Wisconsin finishes ninth highest for the availability of date spots and 14th highest for affordability of dates out of all 100 cities for which we considered data. Specifically, Madison finishes seventh in terms of bars per 100,000 residents, at 31, and seventh for entertainment establishments per 100,000 residents, at 56. It is also the 15th-least expensive place for a date at a bar, as a pair of beers will only run you $8.

Henderson, Nevada ranks 36th in the category of availability of date spots but fifth in terms of affordability. Two beers in Henderson will only run you $5, the best price on this list. The city also cracks the top 25 for affordability in two additional metrics: the cost of two cappuccinos ($7.58) and the median income after taxes and rent ($24,789).

New Orleans, Louisiana excels with a high availability of date spots, coming in third for that index. The Big Easy has the highest number of bars per 100,000 residents in our study, around 57. It also finishes sixth for restaurants per 100,000 residents, around 240. New Orleans does not fare as well for affordability, finishing 51st for this category out of all 100 cities for which we considered data. It ranks 15th lowest when it comes to the price of beer, though, at just $8 for two. The city also ranks No. 4 in our study on the top cities for coffee fanatics.

St. Louis, Missouri ranks eighth for the category of availability and 42nd for affordability. The city has the fourth-highest number of bars per 100,000 residents, at around 35, and the 10th-highest number of restaurants, at 232. Two beers here cost $8, tied for 15th, while a meal for two costs $50, ranking within the top third of the study for affordability. If the first date goes well and turns into a serious a serious relationship, locals will be glad to learn St. Louis ranks No. 2 in our study of top cities for an affordable wedding.

Pittsburgh, Pennsylvania ranks 47th for the category of affordability but comes in sixth when it comes to the availability of places to go out on a date. It ranks eighth highest for both coffee shops and bars per 100,000 residents, with around 228 and 31 respectively. Though the city ranks toward the middle of the study for affordability overall, it actually has the fifth-lowest cost for two cappuccinos, at $7.02. So if the conversation is flowing, you may be able to swing another round of java. And the Steel City may be conducive to your happiness with your partner overall, as it ranks as the No. 1 undervalued city in America, based on its cost of living and quality of life.

Omaha, Nebraska ranks 13th for affordability and 23rd for the availability of date spots. Specifically, the city comes in fifth in terms of the number of bars per 100,000 residents, at approximately 34. It also places sixth for the low cost of two cappuccinos ($7.32) and third for the low cost of a three-course meal for two ($35).

Plano, Texas, a suburb of Dallas, ranks first in the study in terms of its affordability. It is tied for the fifth-lowest cost of a dinner for two people at a mid-range restaurant, at $40. Plano also has the sixth-highest median income in our study after taxes and rent, at $32,074. The cost of two beers or two cappuccinos is both $7.50, which puts the city in the top 15 for affordability in both of those metrics. Plano doesn’t fare quite as well when it comes to the availability of spots to go on a date, however, as it ranks 70th for that category. High-quality dining options abound in the area, though, as Dallas ranks No. 7 in our study on the top cities for foodies.

Tulsa, Oklahoma ranks 15th for the category of affordability in the study and 30th for availability of places to go out on a date. It is tied for the fifth-most affordable meal for two, at $40. It also does well in terms of the other two date costs: Two beers will run you $8, while two cappuccinos will cost just $7.76. Tulsa comes in 25th for the number of restaurants per 100,000 residents, at 195. Tulsa may rank No. 5 on our study of cities where the average renter can afford to live alone, but if you and your date end up shacking up together, you can split those already reasonable expenses.

The final city in our top 10 is Raleigh, North Carolina, which comes in eighth for affordability of dates and 49th for availability of spots to have a date. The city ranks within the top third of the study for all of the affordability metrics: two cappuccinos in Raleigh cost $7.64, two beers cost $8, a three-course meal for two people at a mid-range restaurant costs $50 and the average income after taxes and rent is $26,268. 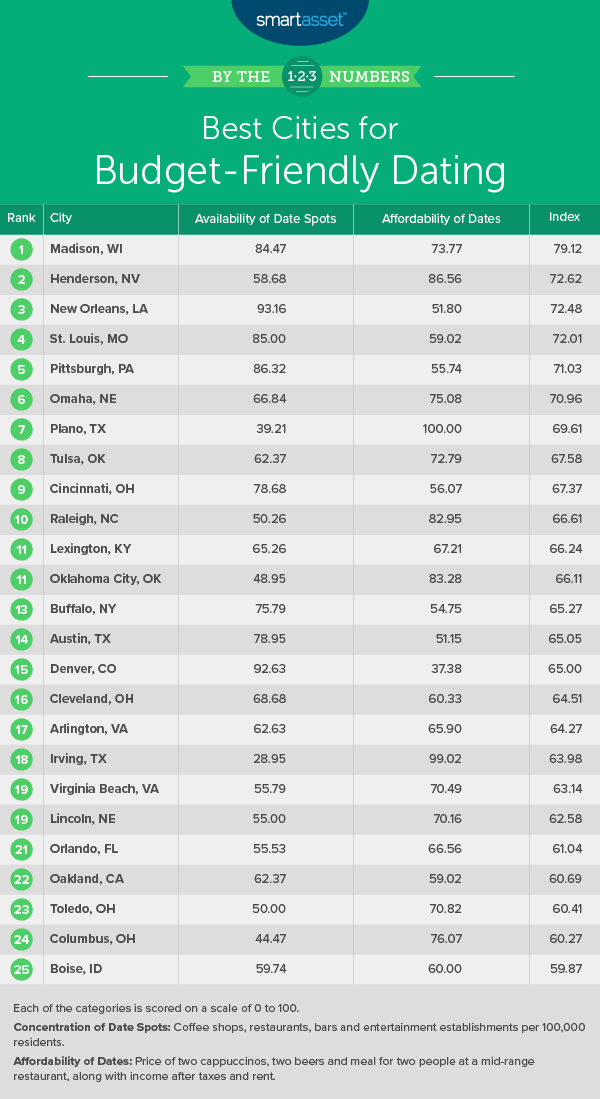 To find the best cities for budget-friendly dating in the country, SmartAsset analyzed data for the largest 100 cities in the U.S. across the following metrics: