The Top Ten Jobs for Salary and Growth in 2016 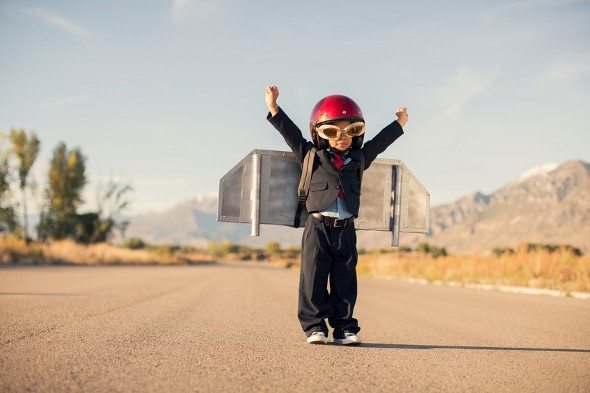 If you’re interested in changing jobs or launching a new career, it helps to look at the employment outlook for your new venture. When a particular profession has strong job growth, job hunters can have a greater chance of getting hired. And when wages are growing, workers can often look forward to having more disposable income to put toward eliminating debt, saving for retirement, or other financial goals.

This is SmartAsset’s third annual study of the top ten jobs for salary and growth. Read the 2015 study here.

To find the best jobs for salary and growth, SmartAsset used 2014 – 2015 data from the Bureau of Labor Statistics. We ranked a total of 756 jobs using the same four metrics that we considered in our 2015 analysis: average annual salaries, one-year salary growth, one-year opportunity growth and the total number of workers in each profession.

To create our ranking, we looked at the number of standard deviations above or below the mean each job scored for each of our factors. Then we added them together to come up with each profession’s overall ranking. 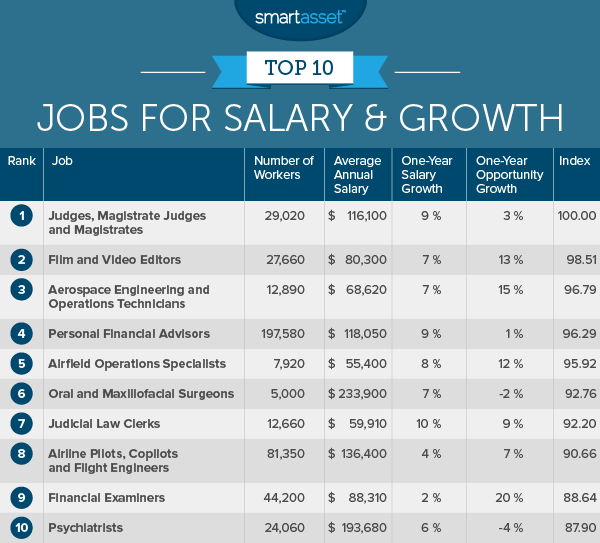 The number of jobs for lawyers grew by just 1% between 2014 and 2015. Even if job prospects for attorneys don’t look that great, you may want to consider sticking it out and working toward becoming a judge. Our analysis found that they have the best short-term outlook when it comes to salary and opportunity growth.

Last year, the number of film and video editing jobs increased by 13%. If you love movies and you have a knack for editing videos, you could potentially have a promising career ahead of you.

California, New York and Florida are just a few of the states that employ the highest number of people interested in video and film editing. So if you haven’t yet thought about moving to New York City or the Los Angeles metro area, you might want to consider it.

New spacecraft and aircraft designs have to be tested before they can be implemented. That’s where aerospace engineering and operations technicians come in. These folks run a series of tests to ensure that equipment and instruments for planes and spaceships won’t break down or malfunction.

Aerospace engineering and operations technicians typically only need an associate’s degree or a certificate from a technical school in order to launch their careers. While they don’t make nearly as much as aerospace engineers, the job growth rate among technicians is significantly higher.

According to our 2015 analysis, personal financial advisors had the best jobs in terms of salary and opportunity growth. While their average annual salaries rose by 9% between 2014 and 2015, the number of financial advisors only grew by 1%.

In April, the Labor Department unveiled new rules requiring financial advisors to act as fiduciaries when helping people plan for retirement. In other words, retirement advisors are now required to act in their clients’ best interests instead of recommending financial products that would benefit themselves. As a result, we could potentially see fewer people entering the profession in the future.

About 7,920 people in the U.S. work as airfield operations specialists. Their primary goal is to make sure that everything runs smoothly between the time that a plane takes off and lands. While their annual salary is slightly lower than the national average (in terms of the jobs included in our study), the number of jobs for airfield operations specialists rose by 12% last year.

Out of all of the occupations on our list, oral and maxillofacial surgeons have the third highest annual salaries. On average, they make $233,900 per year. Only anesthesiologists and surgeons rake in more money.

There’s a reason why these dental specialists get paid so much. They’re the people who diagnose oral cancer, extract wisdom teeth and perform other surgeries on the mouth, face and jaws. Oral and maxillofacial surgeons are required to get additional years of training and certification after attending dental school.

Many law school students graduate with the hopes of landing a judicial clerkship. Law clerks not only write court opinions and assist with courtroom proceedings, but they also help judges decide how to handle their cases.

Judicial law clerks saw their annual salaries rise by 10.2% last year. The average law clerk now makes $59,910 annually. For someone who’s fresh out of law school, that’s not a bad starting salary. According to data from the U.S. News & World Report, most law school graduates make between $50,000 and $74,999 once they begin working.

Whenever you step on a plane, you rely on others to transport you safely. Pilots who work for major airlines typically have about 4,000 hours of flight experience. Copilots need to have at least 1,500 hours of flight time before they can earn the airline transport pilot certificate.

According to the BLS, roughly 81,350 people in the U.S. serve as airline pilots, copilots and flight engineers. The number of people filling these positions increased by 7% last year.

Financial examiners keep an eye on banks and other financial institutions to make sure that they’re not doing anything shady or illegal. Many of them ensure that consumers aren’t confronted with unfair lending practices or loans that they can’t pay back. Others ensure that banks aren’t taking on too much risk or making decisions that could jeopardize the entire financial system.

Last year, the number of jobs for psychiatrists dipped by 4%. But this career may still be worth pursuing, especially if you’re passionate about helping people deal with mental illnesses and disorders. While you’ll need to go to medical school and complete a four-year residency program, once you do you stand to make more than three times the average salary in the U.S.

The 10 worst jobs for salary and opportunity growth all had annual salaries that were below the national average. $56,532 is the national average annual salary for all of the jobs included in this study. With the exception of tire builders, all of them also had negative job growth between 2014 and 2015. The other jobs at the bottom of our list include: coil winders, tapers and finishers, psychiatric aides, material moving workers, choreographers, metal and plastic layout workers, tank car, truck and ship loaders, entertainment attendants, dancers and gaming service workers.