Where Homeowners Save the Most on Taxes in 2017

Few tax breaks have been more controversial than the mortgage interest deduction. Proponents of the tax benefit contend that it encourages Americans to buy homes. Opponents, on the other hand, argue that it reduces tax revenue and leaves lower-income individuals at a disadvantage. For the second year in a row, SmartAsset assessed how the mortgage interest deduction and the property tax deduction could affect homeowners across the country during tax season.

This is the second annual analysis of the cities where homeowners save the most on taxes. Read the 2016 study here.

Our study looks at the cities where homeowners stand to save the most money on their taxes. We estimated the federal tax savings for dual-income households filing joint tax returns in the 25 largest U.S. cities.

To complete our analysis, we made several assumptions. Then, we calculated the federal tax savings. In short, we subtracted the federal tax bill for a family that didn’t claim any homeownership-related deductions (but did claim other applicable deductions) from the tax bill for a family that did claim the mortgage interest deduction and the property tax deduction. For a complete breakdown of the steps we took to complete our analysis, check out the data and methodology section below.

How much do you owe in taxes? Try using SmartAsset’s income tax calculator. 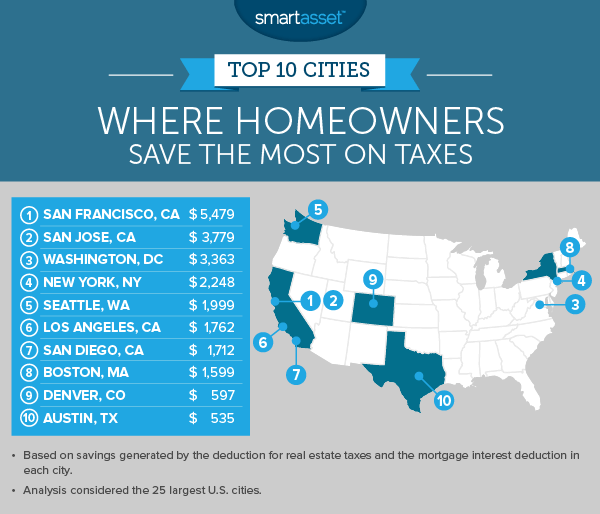 Based on our calculations, homeowners stand to save the most on taxes in San Francisco. In SF – where the median home value is $958,400 – a two-income household with two dependents could save $5,479 in federal income taxes if the family claims both the mortgage interest deduction and the deduction for paying property taxes (in addition to other itemized deductions).

San Jose is another city where homeowners can save thousands of dollars at tax time by taking advantage of tax breaks such as the property tax deduction and the mortgage interest deduction. The median home value in San Jose is $730,300. That’s one reason why tax savings are so high for the city’s residents. When homeowners have expensive homes and bigger mortgages, they pay more interest. And that translates to a higher mortgage interest deduction.

Trying to own a home in Washington, D.C. can be an expensive endeavor. The median home value in the nation’s capital is $575,200 and the typical homeowner spends $18,924  per year on housing-related expenses, including mortgage payments and homeowners insurance.

Our analysis revealed that a family of four living in Washington D.C. can potentially save $3,363 in federal income taxes by claiming the tax breaks for homeowners. So if you can afford to live in D.C. and buy a home there, itemizing your deductions instead of taking the standard deduction might be worth it.

New York is notorious for being a city of renters. About half of the city’s housing units are occupied by renters and more than half of those renters are cost-burdened, meaning that they spend more than 30% of their income on rent.

Among the New Yorkers who make enough money to buy homes, the median home value is $540,800. On the bright side, homeowners who itemize their deductions and claim both the mortgage interest deduction and the property tax deduction may be able to lower their federal income tax bills by $2,248.

On our list of the cities where homeowners save the most on taxes, Seattle ranks fifth. We found that if dual-income households with two children earn $118,552 (the median household income for homeowners) per year and pay $4,149 in real estate taxes, they can save nearly $2,000 just by claiming the tax breaks for homeowners and other applicable deductions.

Related Article: 23 Things to Know Before Moving to Seattle

The median home value in Los Angeles is about 54% lower than it is in San Francisco and 28% lower than it is in San Jose. But lower home values mean that the tax deductions for homeowners aren’t as valuable to residents in L.A. as they are to their counterparts in the Bay Area. Homeowners in Los Angeles can only expect to save $1,762 in federal income taxes by writing off certain expenses, including mortgage interest, real estate taxes, charitable contributions and state and local income taxes.

Torn between renting and buying a house in San Diego? Keep in mind that the median home value in the city is $535,600. While that may be a high price to pay for a house, the tradeoff is that you’ll likely be able to claim the deductions that offer homeowners exclusive tax benefits.

By our calculations, couples with two kids filing jointly could lower their federal income tax bill by about $1,712. So claiming the mortgage interest deduction, the property tax deduction and other deductions could pay off in the long run.

If you’re looking to lessen your tax bite and you’re a homeowner in Boston, you’re in luck. The city takes the eighth spot on our list of places where homeowners save the most money on taxes. By itemizing their deductions and writing off mortgage interest and property taxes, joint tax filers with two dependents could lower their federal income tax burden by nearly $1,600.

In areas where home values are low, the tax breaks for homeowners simply aren’t as beneficial. For example, while the typical homeowner in Denver earns $81,515 per year, she spends about $1,580 on real estate taxes and $14,160 on housing costs overall each year. Claiming the deductions for owning a home and paying other expenses may only save a family of four about $597 in federal income taxes.

Home values in Austin have soared. Recent reports suggest that in the past decade, they’ve been increasing at a faster rate than home prices in other cities across the country. Since we published our 2016 analysis, the median home value in Austin has risen by 9%.

The Census Bureau reports that the median home value in Austin is $285,600. We concluded that a dual-income household with two kids might save only $535 in federal income taxes by itemizing deductions and claiming tax breaks like the mortgage interest deduction. But if home values continue to climb, homeowners could save more money in the future during tax season. 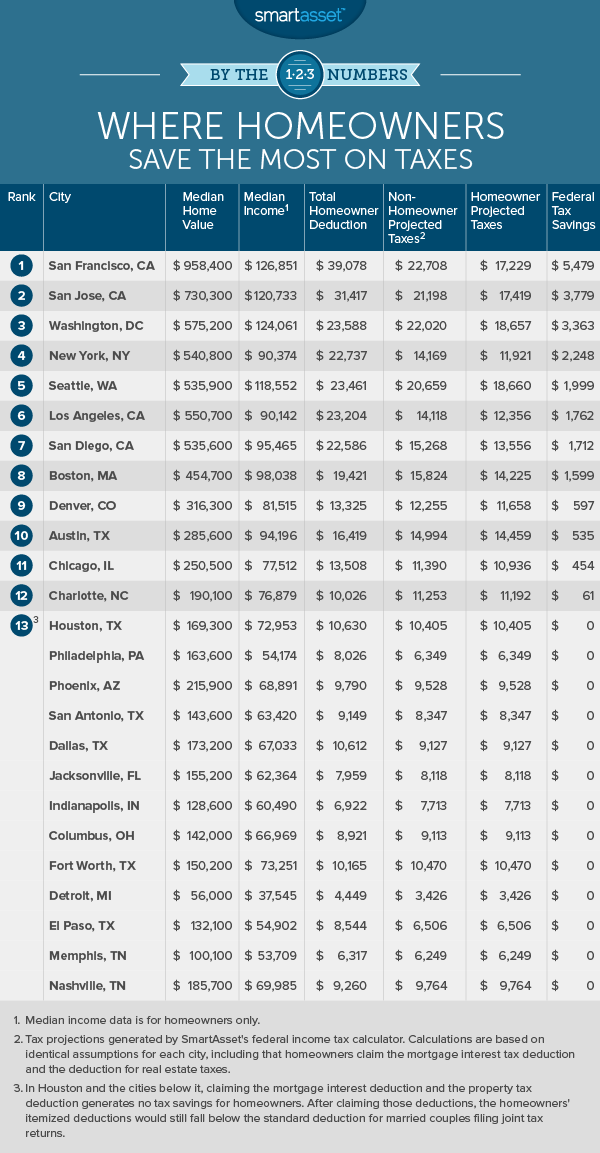 SmartAsset’s analysis looks at the federal tax savings for homeowners living in the 25 largest cities in the country. Our findings are based on several assumptions. First, we assumed that each two-income household had two dependents and earned the median household income for homeowners in each city (which is usually higher than the median income for all households).

We also assumed that each family’s home value would be equal to the city’s median home value, that their mortgage balance would be 70% of the home value and that the mortgage rate would be 4.2% (the national average rate for 30-year fixed mortgages as of January 12, 2017). Finally, we assumed that each household would donate 3% of income to charity, contribute 7% annually to a 401(k) and pay the median amount of real estate taxes for homeowners in each city.

Once we made our assumptions, we calculated the federal tax savings for homeowners in each city by looking at two different scenarios. In one scenario, the homeowners took advantage of the mortgage interest deduction, the property tax deduction and other deductions (including the ones for donating to charity and paying state and local income taxes). In the other scenario, the homeowners claimed other deductions but didn’t claim any tax breaks related to owning a home (we called this the non-homeowner projected tax burden). In either scenario, if the amount of itemized deductions didn’t exceed the standard deduction, we used the standard deduction.