11 Cities Where Homeowners Save the Most on Taxes in 2016 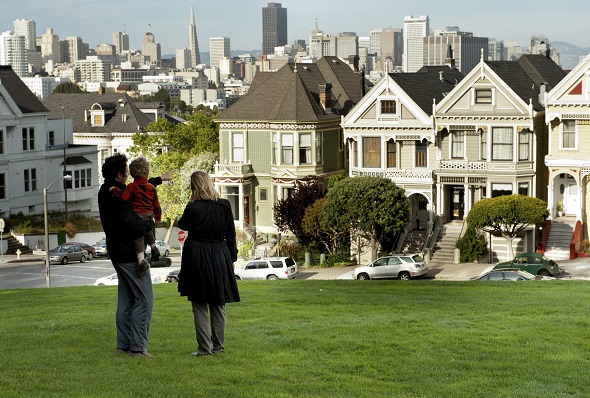 The home mortgage interest tax deduction is one of the most common deductions claimed on federal income tax returns, but that doesn’t mean most taxpayers are taking advantage of it. In fact, according to data from the Tax Foundation, only about 27% of all taxpayers deduct mortgage interest paid from their income when filing their taxes.

Read the 2017 version of this analysis.

There are a number of possible reasons for that. The first is obvious: not all taxpayers are homeowners. The U.S. homeownership rate is about 63%, which is likely similar to the percentage of taxpayers that own homes. Yet that is still double the percentage that claims the mortgage interest deduction.

Another reason many taxpayers don’t claim the deduction may be that their interest payments simply aren’t large enough. For the mortgage interest tax deduction to have an effect on a homeowners’ taxes, the total of that and all other itemized deductions must exceed the standard deduction ($12,600 for joint filers, $6,300 for single filers). If it isn’t, their tax bill will be exactly as large as it would be if they didn’t own a home at all.

Indeed, because the deduction increases as mortgage interest (and, therefore, home value) increase, people with larger homes and larger mortgages get a bigger tax benefit. Likewise, as SmartAsset’s analysis found, it is the people in the wealthiest and most expensive U.S. cities who are in the best position to take advantage of the tax breaks designed to help homeowners.*

How much do you owe? Try SmartAsset’s income tax calculator to find out. 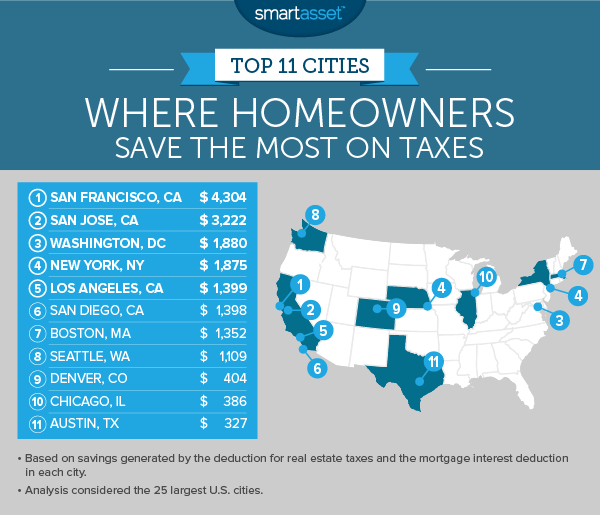 To find the cities where homeowners save the most on their taxes, SmartAsset calculated the tax bill for a representative family in the largest 25 cities in the country. In doing this calculation, we made a number of assumptions.

First, we assumed the family has two earners, who file taxes jointly, and two dependents. We assumed they contribute 7% of income to a 401(k) and 3% to charitable causes. We assumed they earned the median household income for homeowners in each city, which is generally higher than the overall median income.

We also assumed that this family’s home value was equal to the city’s median home value, that they had a mortgage balance equal to 70% of that total and a mortgage interest rate of 3.97% (the average interest rate on a 30-year fixed rate mortgage as of January 7, 2016, according to Freddie Mac – though lower rates are available). Lastly, we assumed that they pay the median real estate tax for the city’s homeowners.

No Tax Savings in Most Cities

Under these assumptions, the representative family in most major cities would not benefit from either the mortgage interest tax deduction or the deduction for real estate taxes. Their tax bill would be exactly as large as it would be if they rented a home or didn’t itemize their deductions. Why?

The principal reason is that in most cities, the median home value is not high enough to generate savings. For example, according to the U.S. Census Bureau the 2014 median home value in Charlotte was $177,500. At that value, a homeowner could expect to pay less than $6,000 annually in mortgage interest. Even claiming a deduction on typical real estate taxes of $2,118, that homeowner’s itemized deductions would still be $4,000 short of the standard deduction.

Find out now: where is better to rent than to buy?

That same logic applies in areas with even less expensive real estate than Charlotte. In cities like Dallas, Philadelphia, Houston, Columbus, Memphis and Detroit, home values are not high enough to generate tax savings for a family like the one we analyzed. Data for each of these cities is displayed in the table below. (Families who own more expensive homes in these cities and therefore have larger mortgages could see some savings. Also those with higher interest rates could see some savings.)

Homeowners in the Bay Area Get a Big Break

On the other hand, families in some of the country’s most expensive cities may save hundreds or even thousands a year by claiming deductions on their homeownership expenses.

The highest savings in SmartAsset’s analysis were found in the Bay Area. In the country’s most expensive housing market – San Francisco – a family of four such as the one we analyzed could save more than $4,000 annually by deducting interest and real estate taxes paid. In San Jose, that family would save about $3,200 each year.

There are two reasons for those large savings. The first is the region’s high home values, which necessarily lead to higher interest payments and tax payments and, therefore, a higher total deduction. Median home values in San Francisco and San Jose were $869,600 and $671,500, respectively, in 2014 and are even higher now.

The second reason for those large savings is the relatively high level of income in the Bay Area. The average income for households that own a home in San Francisco or San Jose is $114,608 and $115,361, respectively.

The marginal tax rate is much higher on those households than on similar households in a city like San Antonio, where median income is $61,173 for homeowners. Because of the higher rate paid by San Francisco’s median earner, every dollar deducted leads to higher savings. (Note that our analysis only considers federal tax savings and not the relatively high state taxes paid by California residents.)

Two other regions of the country reflected big tax savings for homeowners in SmartAsset’s analysis: the Northeast Corridor that stretches from Washington, D.C. to Boston and the rest of the West Coast (outside of the Bay Area).

Homeowners in Washington, D.C. secured the third-highest level of savings in our analysis, ahead of those in more expensive cities like New York, Los Angeles and San Diego. The Capital’s homeowners have a median household income of $109,643 – third highest in the U.S. behind the two Bay Area cities. That means a higher tax rate, and larger savings from deductions claimed.

Hoping for a big refund check? We calculated the average tax refund in every state.

In these three cities, the representative family whose taxes we analyzed saved between $327 and $404 on their taxes. While that is minor compared to the multi-thousand dollar savings we found for the Bay Area, it goes a bit further in these less expensive cities.

Homeowners in Denver and Austin may see their savings rise in coming years. The housing markets in both cities have been very hot, with price growth approaching double digits. For new homeowners and homeowners who refinance their mortgages, those higher home values can translate directly to higher tax savings.

As it pertains to a family of four, the mortgage interest tax deduction has the largest benefits for homeowners living in America’s wealthiest and most expensive cities. While it does not affect the taxes of such a family in cities like Houston (where the median home value is $153,600) or Columbus ($133,600), it generates multi-thousand dollar savings for a similar family in San Francisco.

Note that the benefit will be larger (and affect a greater number of people) for single filers. That is because the standard deduction is lower for single filers, which means there is a lower threshold for itemized deductions to generate savings.

For example, while the representative family of four would receive no homeownership benefit in Dallas based on our assumptions, a single filer with no dependents would have tax savings of $904 (assuming the same home value and same level of income). That being said, the single filer would still have higher taxes overall. 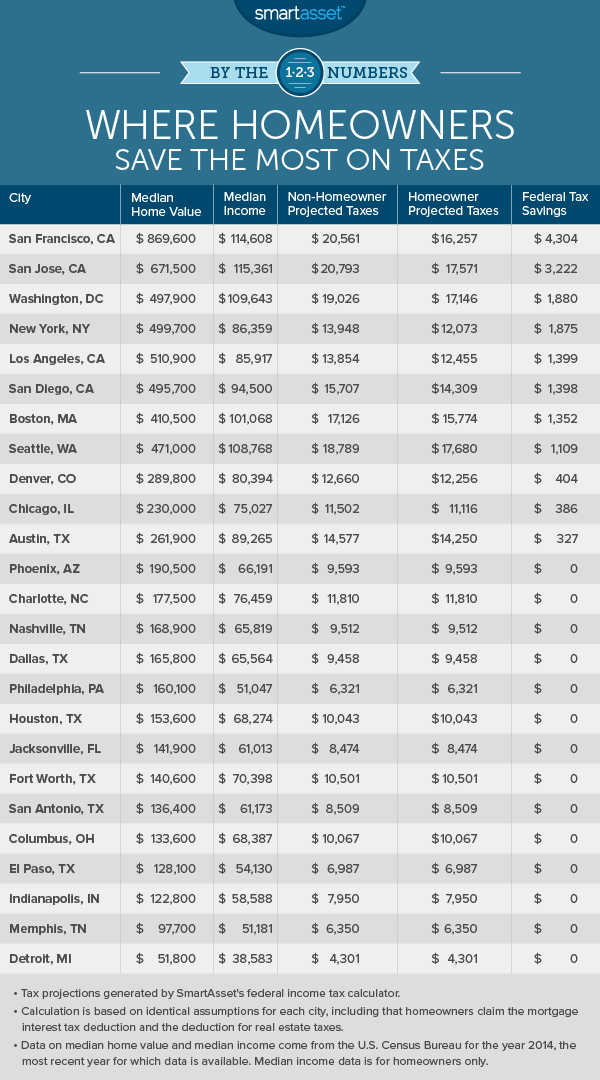