The Best Community Colleges of 2015 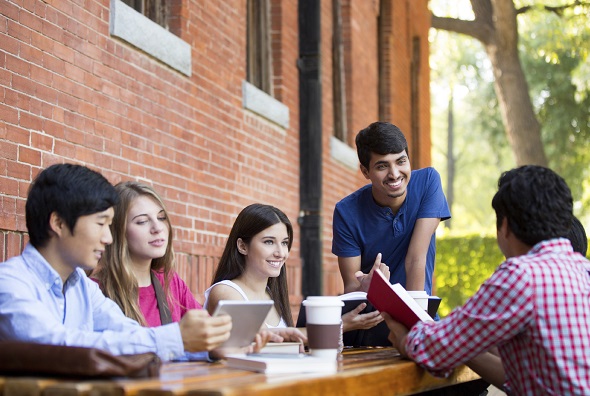 That means students who attend a community college and transfer to a four year institution can save significantly on tuition and have fewer student loans to pay off when the time comes to graduate.  Likewise, students who exit a community college with an associate’s degree still get a significant boost in the workforce, earning an average of $10,800 more than workers with only a high school diploma or GED, according to U.S. Census data.

This is SmartAsset’s second annual study of the nation’s best community colleges. See the 2014 version here.

The national import of two-year colleges was evidenced in the recent discussion surrounding a presidential proposal that community college be made free for anyone who wants to attend. Two states, Tennessee and Oregon, have already done just that. Even in states where community college isn’t fee, however, many students are getting great value for their community college dollar.

The best community colleges should offer a high quality education at a low cost, with a high success rate and a good return on investment. Therefore, to determine the top schools from across the country SmartAsset looked at 565 public two-year colleges, considering four metrics reflective of quality, cost, success rate and ROI.

We started with the three metrics we analyzed in last year’s study: the graduation and transfer rate at each school, in-state tuition and the ratio of the average starting salary to the overall cost. This year, in addition to those three metrics, SmartAsset included one more. To capture a broader picture of the quality of education at community colleges, we also considered the student-teacher ratio at each school.1

Using these four factors, we ranked all of the colleges in our study by the number of standard deviations above or below the mean they were in each category. The top schools had the highest overall scores. Below are the top 10 and top 100 community colleges in America.

Key Findings of the Best Community Colleges of 2015 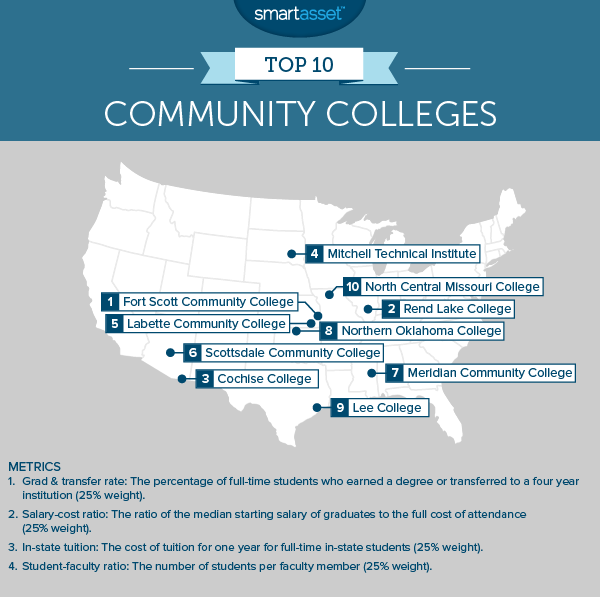 So what makes Fort Scott Community College so great? The school’s graduation-or-transfer rate is an incredible 87%, double the average for the colleges in SmartAsset’s study. One reason so many students find success at Fort Scott is that the student-teacher ratio is just 12:1.

Rend Lake is one of 48 schools in the Illinois Community College System. The average Rend Lake graduate has a starting salary that is 1.3 times the full cost of school. Rend Lake also has a number of athletic teams, called the Warriors, which are part of the National Junior College Athletic Association. Among the sports in which they compete are basketball, cross country, golf and track & field. The men’s cross country team has won several national championships over the past 15 years.

For the second year in a row, Cochise College ranks as the third best community college in the nation.

It does so on the strength of its low cost and high return on investment. In-state tuition for a student at Cochise College is just $1,752, well below the national average of about $3,000. Yet, students who graduate from Cochise on average earn a starting salary 60% higher than the total cost of their education.

Mitchell Technical Institute offers associate’s degrees in fields such as agricultural technology, satellite communications, wind turbine technology and radiation therapy. While the school’s tuition and fees are above average, totaling about $4,300, students can expect to quickly pay off any student loans. The average MTI grad goes on to earn a starting salary 1.08 times the total cost of getting a degree.

Initially founded in 1923 as an extension of the local high school, Labette Community College has since developed into an accredited community college, granting degrees in everything from physics to nursing. It has a student body of about 1,200, most of whom attend class at the main campus in the town of Parsons, in southeast Kansas. The school’s successful completion rate of 72% ranks ninth in the country.

With a student body of over 10,000, Scottsdale Community College is the top ranked large two-year college in the nation. While its graduation-or-transfer rate of 49% is only slightly above average among all schools, it rates among the top 20% of large community colleges.

Likewise, despite its size, SCC provides students with great value. The total tuition and fees are around $2,000 per year for full-time, in-state students. Scottsdale Community College also has a number of sports teams, known as The Fighting Artichokes. Their mascot is Artie, a giant humanoid artichoke.

One of 15 public community colleges in the state of Mississippi, Meridian provides its students with high value at a low cost. Tuition and fees at Meridian are just $2,400 per year for a full-time, in-state student. The school still has a successful completion rate of 64%, well above the average of 40%.

Graduates of Northern Oklahoma College receive the highest return on investment of any two-year school in the U.S. The average starting salary for NOC graduates is 1.88 times the total cost of education. That can certainly help when it comes to paying off student loans.

Located in Baytown, Texas, which is part of the greater Houston metro area, Lee College grants degrees in subjects ranging from videogame design to paralegal studies. The school can be a good option for students who want to continue working while taking classes, as over 70% of students at Lee College are part-time. It is also very inexpensive, with total annual tuition and fees of around $1,500 for in-district students.

For the second year in a row, North Central Missouri College ranks among the top ten community colleges in the nation. Graduates of NCMC enjoy an average starting salary that is 45% higher than the total cost of getting their degree. That’s the seventh highest ROI in the country.

Read the 2016 version of SmartAsset’s study of the best community colleges.

1. The data used in SmartAsset’s study comes from the National Center for Education Statistics and collegemeasures.org.