The Top Ten Community Colleges in the Country 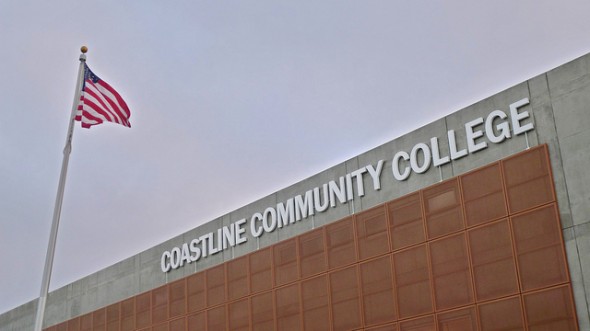 A college education is increasingly important in order to get and keep a job in the current information-oriented world. However, even as it becomes more and more of a necessity, college costs are rising, making it luxury-priced. Many people turn to community college in their local areas in order to get a higher education at a much more affordable price, either going into a career that requires a two-year associate’s degree or transferring to a four-year institution to further their aims. SmartAsset has looked at close to seven hundred public community colleges across the country in order to find the best of the best.

To determine the best we wanted to figure out which colleges offered a low cost education, good return on investment and high success rate. To measure the cost of education we looked at in state tuition for one academic year. To measure return on investment we looked at the ratio of starting salary for graduates to the cost of the education. To measure success rate we looked at the percentage of students who enroll at the community college, graduate and then go on to transfer to a four-year institution.  Using these three factors, we ranked the community colleges by how many standard deviations they outperformed the mean in each category. It gave us a list of the top ten community colleges in the country.

What Will It Cost to Go to School? 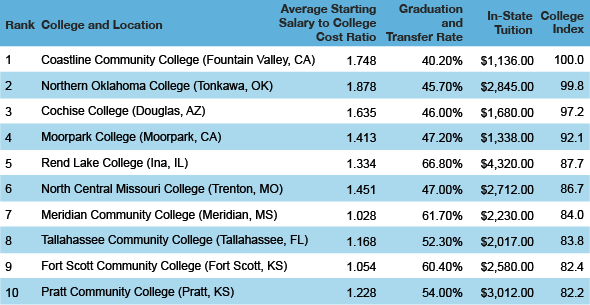 Coastline Community College has twenty-one academic departments largely in educational and medical support fields. Coastline graduates make one and three-quarters times their total education costs their first year working after graduating, and in-state students pay $2,200 less a year than the national average to go to school, making it both the least-expensive school for local students and the top-performing community college on our list.

Northern Oklahoma graduates have an even better rate of starting earnings to college costs than Coastline graduates do, at 187 percent. This school, which is between Wichita and Oklahoma City, also has about a ten percent greater graduation and transfer rate than the national average.

In-state students at Cochise College pay only $1,680 per academic year, and once graduated, they make 63.5 percent more than their college costs in a year’s salary.

Moorpark is one of the less expensive schools for in-state students, at $1,338 a year, and graduates make 41.3 percent more than their college costs on average in their first year on the job.

The southern Illinois community college of Rendlake has a 66.8 percent graduation and transfer rate, nearly twice the national average. Graduates also make 33.4 percent higher than their college costs as an average starting salary.

North Central Missouri College charges about $700 less per year than the national average for a local student with a tuition of $2,712. Graduates make up their college costs plus 45 percent in their first year out of school.

Not only does Meridian have a 61.7 percent graduation and transfer rate, it also costs more than $1,000 less a year than average for in-state students.

Students at this community college in Florida’s capital make 22.8 percent more than their overall college costs their first year out of school. Plus, 54 percent of them (about 16 percent greater than the national average) graduate and transfer to a 4-year school.

Can I Afford My Student Loan Payments?

Fort Scott Community College has a greater than 60 percent graduation and transfer rate, as well as in-state tuition that’s about $900 less than the national year average.

Rounding out the list is Pratt Community College, whose graduates make 22.8 percent more than their college expenses as a starting salary, and which has a 54 percent graduation and transfer rate.

Check out SmartAsset’s 2015 ranking of the best community colleges in the country.