The Highest Paying College Major in Every State – 2015 Edition 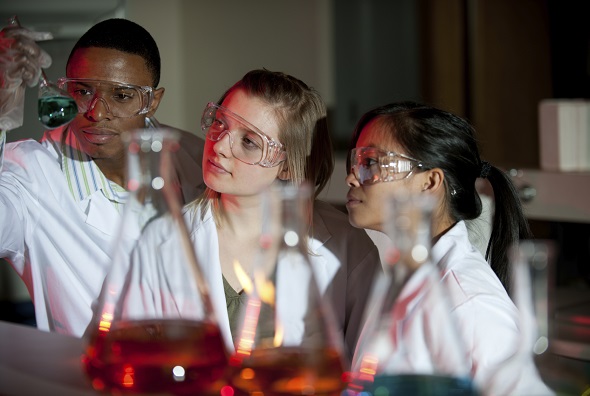 Choosing a college major isn’t necessarily all about the Benjamins. There are other things to consider – like what interests you. This is particularly true for majors that lend themselves to a specific profession or career path. For example, if you can’t stand the sight of blood, you might not want to become a pre-med major.

Read the 2016 version of our annual study on the top-paying college major in every state.

That being said, there are important economic considerations involved in choosing a major. As college costs continue to rise and students are forced to take out more loans to pay for their degree, undergraduates probably want to consider the financial outlook for a given major. As fascinating as a topic might be, if a degree isn’t lucrative enough to pay for the life you want, it may not be worth it.

To find the highest paying college major in every state, SmartAsset analyzed microdata from the U.S. Census Bureau’s American Communities Survey. We looked at over 3 million files on income earners throughout the country, across the over 170 different undergraduate majors tracked by the Census Bureau.

For each of these majors, we calculated the average income in every state. All income earners were included, not just recent graduates or graduates with only a bachelor’s degree. Thus, for some majors in our map (such as pre-med), it is safe to assume that the top earners have additional degrees.

Some relatively uncommon majors were excluded from our final analysis because the average income results were statistically unreliable. Specifically, we excluded any degree for which the relative standard error of the sample average income was over 30%. So, the below results reflect the highest paying commonly held majors in each state. 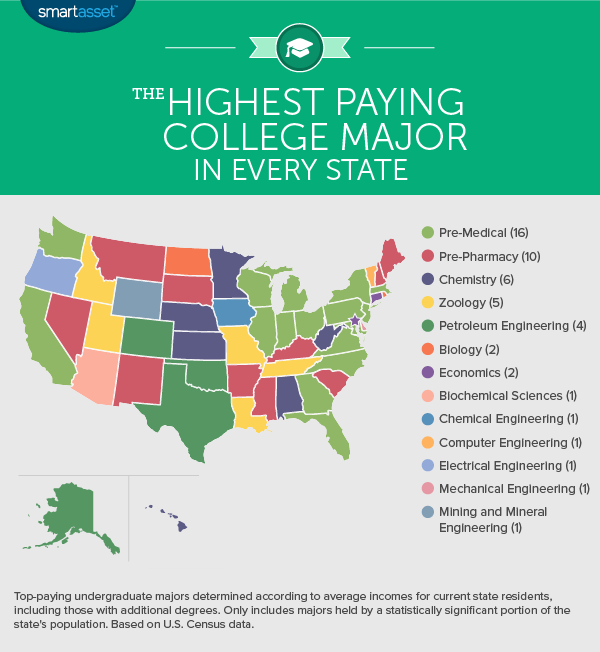 Doctors make a lot of money. According to the BLS, the average income for pediatricians in the U.S. is $175,400. It’s important to keep in mind, however, that not all students who are pre-med as undergrads go on to become doctors. Many pursue different (and often less lucrative) routes. Nonetheless, pre-med majors are still the leading earners in 16 of the 50 states, the most of any major.

There are over 290,000 pharmacists in the U.S., earning an average of $118,740. While pharmacy school is no joke, usually taking four years to complete, it is also less competitive than medical school. Thus, it is a safer bet that undergraduates who study pre-pharmacy go on to become pharmacists.

For those with a scientific mind who are uncertain about the profession they wish to pursue, chemistry may be a good choice. Chemistry majors can go on to work in a wide variety of fields and roles. Among the industries in need of workers with a background in chemistry are aerospace, energy, public health and biotechnology.

Many of the employers with the highest need for workers who have a background in zoology are government agencies, including the EPA, the NHS and the National Park Service. In the private sector, many zoology majors become veterinarians, who earn an annual average income of about $100,000 nationally.

Very few undergraduate economics majors go on to be economists. Many go into business. Others pursue journalism. Some become investment advisors.

Washington, D.C., however, is home to some 40% of the country’s professional economists, 7,300 out of a total of 18,680. Working at places like the Treasury Department, the Federal Reserve and the Department of Commerce, these economists earn an average of $121,090.

Biology is a good major for those who want to work in the health or natural sciences but aren’t quite sure what specific track they would like to pursue. For example, biology courses make up many courses required for pre-med majors or pre-pharmacy majors.

Biochemistry, the study of the chemical interactions that take place within organisms, is a field of increasing importance. It is one of several key sciences underlying the biotech industry. Nationally, the number of biochemistry jobs increased by over 7% from 2013 to 2014, more than double the average rate of job growth.

Electrical engineers are needed in nearly every industry. They play key roles at companies like ICS Blount, a construction equipment manufacturer based in Portland, and Intel, the computer chip maker. In fact, Intel is one of the largest employers of any kind in Oregon. According to the company’s website, it employs 17,500 people in the state.

Whether as developers or engineers, computer engineering majors are playing an important role in Vermont’s growing tech sector.

Despite having the second lowest population of any state, Wyoming produces 40% of the nation’s coal and is home to the ten most productive coal mines in the country. Among other things, mineral engineers are responsible for designing those mines and overseeing the technical aspects of their operation.

If you like taking things apart and putting them back together, mechanical engineering may be the major for you. There’s a lot of computing involved in the design process for mechanical engineers these days but the thrill of seeing your ideas put into motion (literally) is hard to beat.

Delaware is home to several auto manufacturing plants. DuPont, which specializes in chemicals, also has a large demand for mechanical engineers, who design and improve the machines it uses in its factories.

Nearly all of the materials we use in everyday life were designed in a laboratory by a chemical engineer at some point in the past. This includes everything from the shampoo we use in the morning to the shoes we wear all day to the pans and utensils with which we cook dinner in the evening.

In Iowa, chemical engineers are involved in a wide array of industries, including the corn industry. Nearly 50% of Iowa corn is used to make ethanol, a type of fuel.

Questions about our study? Contacts us at press@smartasset.com.