The Highest-Paying College Major in Every State – 2016 Edition 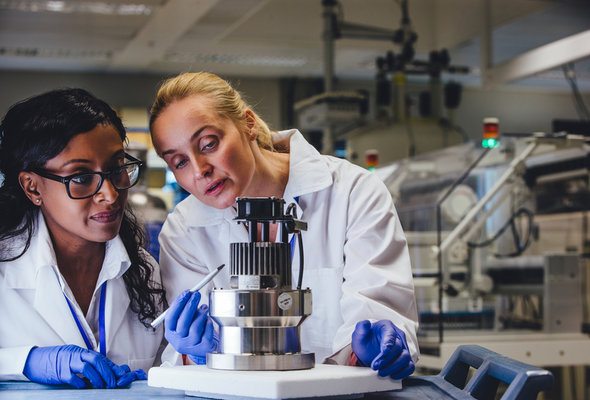 Deciding on a subject to major in is a huge decision for most college students. There are many factors to consider, including your interests, your strengths and future career opportunies. Choosing a less lucrative career path may have its downsides, particularly if you have few job prospects after graduation and you’re buried under a mountain of student debt. That’s why students might want to think about the return on their educational investment before picking a major. For the second year, SmartAsset took a look at the highest-paying college major in every state.

This is the second annual edition of this study. Read the 2015 version here.

We found the top-paying college major in every state (and Washington D.C.) by assessing microdata from the U.S. Census Bureau’s 2010-2014 American Community Survey.

The Census Bureau collects data on more than 170 different undergraduate majors. To complete our analysis, we calculated the average income for residents in each state who had each of these college majors. We considered all income earners, including those who have bachelor’s degrees and advanced degrees.

Note that our study looks at the top-paying commonly held college major in every state. In other words, we only included the majors that were held by a statistically significant portion of each state’s population. We also excluded any major for which the relative standard error of the sample average income was above 30%. 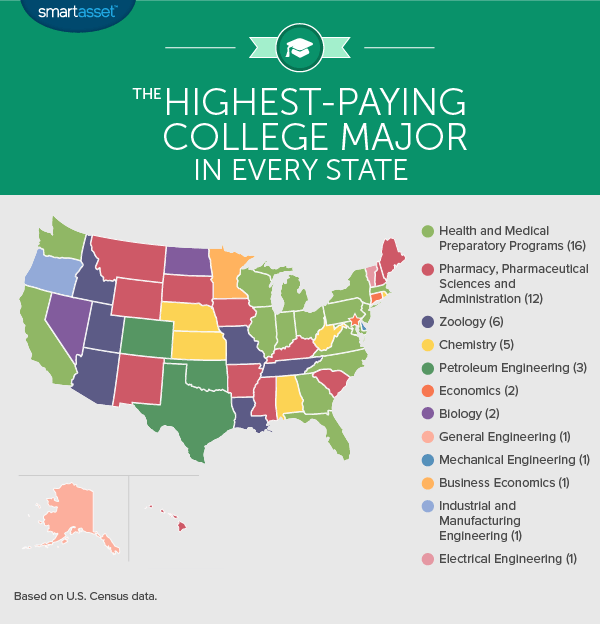 Our analysis shows that the pre-med track is the highest-paying college major in 16 different states. In these places, average annual incomes for residents who complete a health and medical preparatory program range from $92,775 in Georgia to $226,163 in Wisconsin.

Students in pre-pharmacy programs typically take undergraduate courses for two or three years before attending pharmacy school. They’re expected to take difficult classes, including organic chemistry and anatomy. But in the end, all of their hard work can pay off. According to the Bureau of Labor Statistics, the average pharmacist now earns $121,500 per year.

After they graduate, students who major in zoology can pursue various career paths. Some become wildlife biologists while others go on to become biology teachers or zookeepers. Veterinary technicians earn less money than veterinarians and others who work with animals. But job growth through 2024 is expected to be 19% (which is much faster than average).

Students who major in chemistry can eventually earn around $100,000 annually, especially if they live in a state like Rhode Island or Alabama. Those who don’t want to enter the medical or scientific field can look for jobs in other industries. For example, many chemistry majors attend law school and become patent lawyers.

Petroleum engineers find ways to get access to gas and oil. Undergraduate students who are interested in this line of work can benefit from participating in co-op programs that allow them to gain work experience while they’re obtaining their degrees.

The average worker who majored in biology earns $82,060 per year in Nevada and $67,836 per year in North Dakota. Compared to similar majors, biology is usually considered to be a more general degree program. Graduates who study biology can look for research positions, teaching or government jobs or pursue a career in the healthcare industry.

Like we found in the 2015 edition of this study, economics is the top-paying undergraduate major in Connecticut and Washington, D.C. Students who graduate with degrees in economics can do themselves a disservice by only searching for jobs with the word “economics” in the title. Some of the highest-paying jobs for economics majors include personal financial advisors and investment bankers.

The median household income in Minnesota is around $63,488, according to one-year estimates from the Census Bureau’s 2015 American Community Survey. But folks who major in business economics earn $88,541 per year, on average. Business economics takes economic theories and ideas and applies them to business operations and practices.

Electrical engineering is the highest-paying college major in Vermont. Graduates interested in working as electrical engineers in the Green Mountain State might want to consider looking for employment opportunities with IBM or GE Aviation – two of the state’s top employers.

Regardless of the path they decide to take, many general engineering students end up making a nice chunk of change once they enter the workforce. In Alaska, the average worker who majored in engineering earns $131,095 annually.

Paying off student loans isn’t fun. But dumping your student debt can be a lot easier when you have a six-figure salary. If you want to make a lot of money, majoring in industrial and manufacturing engineering can potentially help you achieve that goal.

Industrial engineers who live in Oregon make more money than most of their counterparts across the country. These individuals try to improve work conditions and find ways for manufacturers and other businesses to operate more efficiently.

Delaware is one of the top-paying states for mechanical engineers, according to BLS data. May 2015 data reveals that those who work in the First State make $48.78 per hour, on average.

Mechanical engineers typically only need a bachelor’s degree in order to begin their careers. But you can obtain a professional license if you want to advance and manage other engineers.