The Best Places for Retirees to Live and Work in 2020 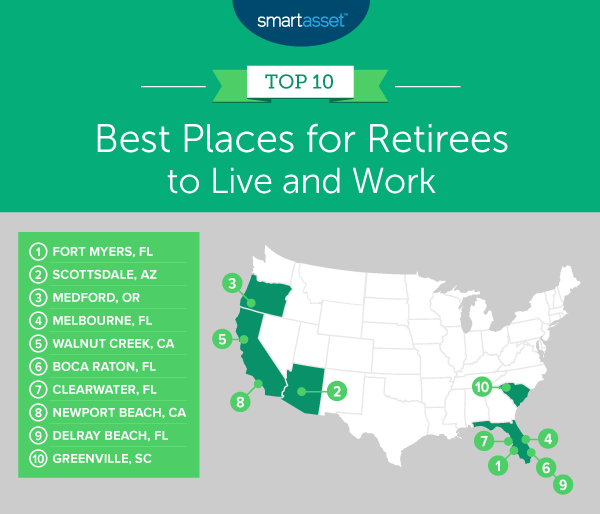 Retirement means different things to different people. For some, it’s all about lounging on a beach, hitting the links or taking the boat out on the lake. Others are focused on finding a place that balances safety, affordability and healthcare access. And some people will plan to keep working in retirement, at least part time: A 2019 study from the AARP found that more than 20% of people 65 and older are working or looking for work, compared with just 10% in 1985. With these priorities in mind, SmartAsset set out to find the best places in America for retirees to live and work.

To do so, we compared 525 cities (each with at least 65,000 in population) across a wide range of metrics: population above the age of 65, unemployment rate for seniors, housing costs as a percentage of retirement income, estimated tax burden for seniors, crime rates, and access to important amenities like retirement communities and medical centers. Here’s what we found. 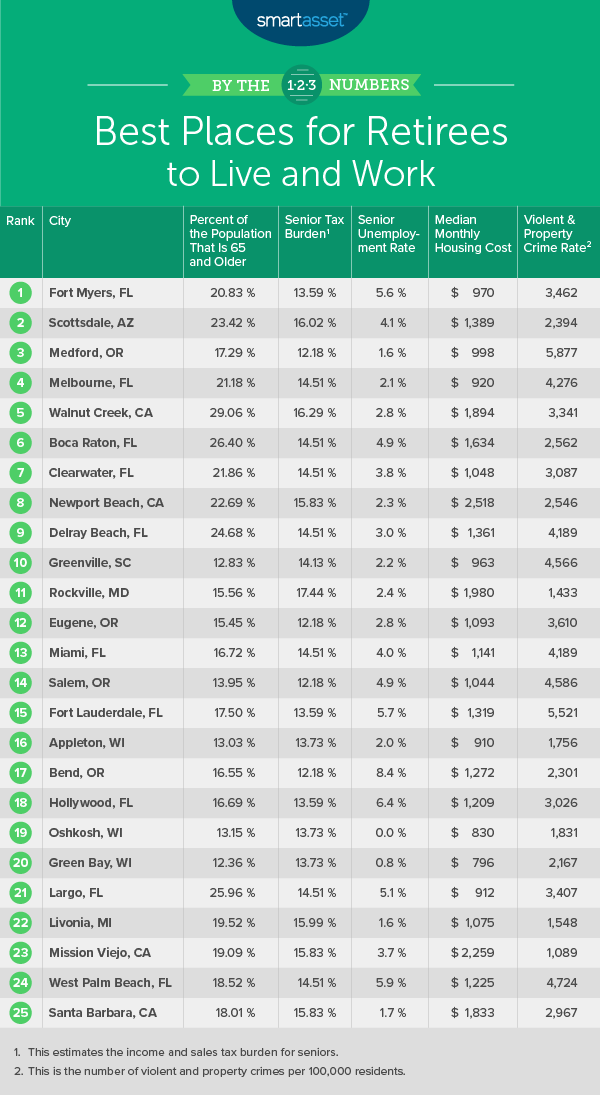 Located on the Gulf Coast of Florida, Fort Myers is the best place in America for retirees to live and work. It is especially strong in the tax department, with a senior tax burden of just 13.59%. (This number estimates the total sales tax and income tax the average senior will pay.) In terms of activities for seniors, there are many museums and science centers in the city. It’s also a good baseball town: The Boston Red Sox and Minnesota Twins hold their spring training in Fort Myers, and the city is also home to the Fort Myers Mighty Mussels Class-A minor league team. Fort Myers is fairly affordable in terms of housing: Housing costs are just 22.44% of average retirement income, 25th on this list. The city does have fairly high unemployment for seniors, at 5.6%, so that is something to be mindful of if you want to work in retirement.

Scottsdale, Arizona is known for having a large older population — 23.42% of the population is at least 65, the seventh-highest rate in this study — so as a retiree, you’ll have plenty of peers with whom to socialize. Scottsdale is located near Phoenix, so you’ll also have access to all the attractions a big city offers, including cultural institutions and teams playing in all four of North America’s major sports leagues. Also near Scottsdale is a casino for your entertainment, found at the Talking Stick Resort. Just don’t gamble away your retirement savings: You’ll need it to pay for the expensive housing, which comes in at 29.07% of average retirement income, towards the bottom of the cities in the top 10. The unemployment rate for seniors is 4.1%.

Medford, Oregon, the first West Coast city on this list, has an average tax rate of just 12.18% for seniors, and there are more than five retirement centers per 10,000 residents — both in the top 10 rankings for those metrics in this study. Medford is not far from Crater Lake National Park, so retirees who want the chance to explore the great outdoors will have plenty of opportunities to do so. There also seems to be plenty of employment options for retirees in Medford: The senior unemployment rate is just 1.6%.

Melbourne, Florida is the next Sunshine State locale on this list. Located on the Space Coast of Florida, Melbourne is a good spot for anyone who wants access to medical options, as there are more than 46 medical centers per 10,000 residents, a top-25 ranking for that metric on this list. Melbourne is also a great option for seniors who want to convince their grandchildren to visit them — it’s just 60 miles from Orlando, home of Disney World and Universal Studios. Melbourne has a senior unemployment rate of 2.1%. The tax burden for seniors is 14.51%, among the 50-lowest in this study.

Walnut Creek is the first of two California cities to make this top 10. More than 29% of the population in Walnut Creek is 65 or older, the second-highest percentage in this study. Walnut Creek is in the East Bay area, not far from Berkeley and Oakland. That proximity to culture – from sports, to art, to music – will be a major plus for anyone who chooses to retire in Walnut Creek. Walnut Creek is a safe place to live, too. There were just 154 incidents of violent crime per 100,000 residents, a rate that puts it safely and squarely within the top 100 of this study for that metric.

More than 26% of the population in Boca Raton, Florida is 65 or older, the fourth-highest rate on this list, so you’ll have friends in your demographic around. Among the biggest attractions in the city are the beaches, so if you’re the type to set out a chair and relax with your toes in the sand, Boca may be the choice for you. Equipped with great medical infrastructure, Boca Raton has 83 medical centers per 10,000 residents, the second-most in this study. The unemployment rate for seniors in Boca is fairly high, though, at 4.9%.

Clearwater, Florida has a lot of retirement communities, more than two per 10,000 residents, so if it’s important for you to live in a place that caters to your specific lifestyle, this may be a good place to look. The high number of retirement communities naturally means there is a fairly high population of seniors: 21.86% of the people living in Clearwater are 65 or over. Clearwater is located on the Tampa Bay, so you’ll have access to all the culture and entertainment options in Tampa and St. Petersburg, including a large gallery of blown glass by legendary artist Dale Chihuly. If you’re from the Philadelphia area, it is worth noting that the Phillies play their spring training games right in Clearwater.

The second California town on this list is Newport Beach. It places in the top 20% of this list for the lowest violent crime rates — just 144 per 10,000 residents. As the name suggests, Newport Beach is right on the water in Orange County, in the heart of SoCal. One popular destination is Balboa Island, where you can take a ferry to shops and restaurants. Newport Beach is another city where you’ll have no problem finding fellow retirees to befriend, as 22.69% of the population is at least 65.

The final Florida city to make the top 10 is Delray Beach, where nearly 25% of the population is 65 or older, the sixth-highest rate on this list. Any Japanophiles looking for a place to retire should consider Delray Beach: The Morikami Museum and Japanese Gardens has tea ceremonies and calligraphy workshops. Delray is also a good choice for those who care about access to medical care: There are nearly 58 per 100,000 residents, a top 10 ranking.

The estimated tax burden for seniors in Greenville, South Carolina is just 14.13%, in the top 50 for this study. Both sports fans and art lovers have plenty to do here. There is a Single A baseball team, the Greenville Drive, and the Greenville County Museum of Art has a large collection of American art. Housing costs represent 24.72% of retirement income in Greenville, the 87th-lowest percentage in this study. 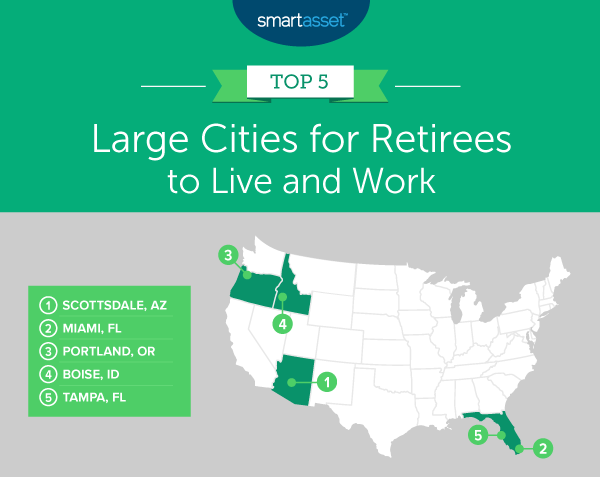 Many of the cities on the above list are on the smaller side. If you’re looking for a slightly more urban experience, consider these locations:

Scottsdale is the only city with more than 200,000 people to make our overall top-10 list, so you know this desert locale is a good choice. Seniors make up 23.42% of the population here.

Miami is a bustling cultural metropolis, so be prepared to be surrounded by plenty of people on your way to get a Cuban sandwich. Miami has strong health-care access: It has more than 81 medical centers per 10,000 residents, the third-highest rate on our list.

Portland is great for those who like the tranquil forests of Cascadia and who want to be on the front line for the latest hipster food trend. It’s also a financially palatable locale for retirees: Seniors in Portland can expect to pay taxes of 12.18%, the fifth-lowest among cities in our study.

Boise is remote, but it’s a fairly big city. Boise State University is there, so there are plenty of cultural and sporting options for entertainment. Boise has a senior unemployment rate of 2.4% and housing costs make up just 25.98% of retirement income, safely below the threshold of being housing cost-burdened.

The center of the Tampa Bay area, Tampa is located right on the water and has all the amenities of a big city. The tax burden for Tampa seniors is just 14.51%, and the senior unemployment rate is a moderate 4.1%.

SmartAsset found the best cities to retire in the U.S. by looking at data on 525 cities – all with populations of 65,000 or more. We compared cities across eight metrics:

We found the mean for each metric and how each city fell comparatively (i.e. how many standard deviations above or below the mean). From there, we calculated an overall score, giving a single weighting to all metrics except violent and property crime rates, both of which were half weighted. The city ranking as the best place to retire received a score of 100 while the city ranking worst received a score of 0.