The Average Retirement Age in Every State in 2016

Not everyone leaves the workforce at age 65. Some people decide to retire before they reach full retirement age, even if they have to miss out on some of the Social Security benefits they’re entitled to receive. Others try to keep working for as long as they can because retiring early isn’t possible or they’re afraid of outliving their retirement savings. For the second year in a row, SmartAsset took a look at how the average retirement age varies across the country.

This is the second annual edition of this study. Read the 2015 version here.

What will your retirement look like? Talk to a financial advisor in your area. 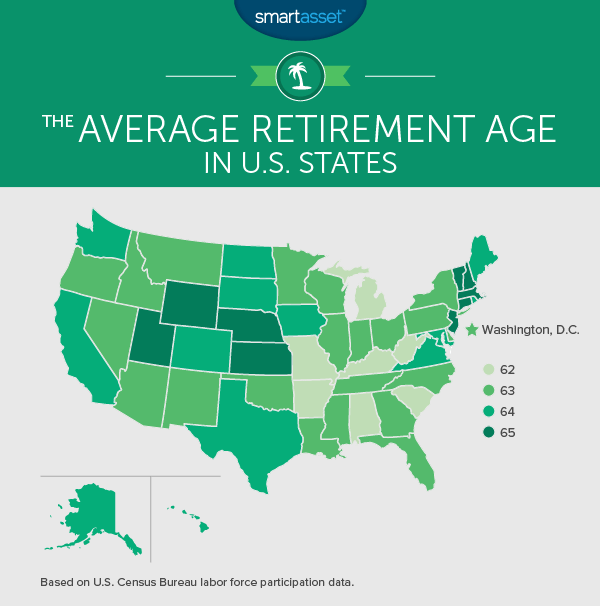 Where the Average Retirement Age Has Changed

In our 2015 analysis, we found that Alaska was one of the states with the oldest average retirement age (65). That’s no longer the case. Now, the average person in the state retires at age 64.

We could tie multiple factors to the drop in the state’s average retirement age. But one thing that could affect it is the state’s rising unemployment rate. According to the Bureau of Labor Statistics (BLS), the state’s seasonally adjusted unemployment rate went from 6.5% in July 2015 to 6.7% in July 2016. For those who are struggling to find work, retiring early might be the only option.

Last year, Delaware was among the states with the youngest average retirement age (62). Now, the average resident in the state retires at age 63. Since 2015, the statewide seasonally adjusted unemployment rate has fallen, so older workers may be able to stay in the labor force a little longer.

Remaining in the workforce as long as possible might make sense considering that Delaware isn’t a cheap place to live. According to five-year estimates from the Census Bureau’s 2014 American Community Survey, residents in the state spend about $13,620 on housing costs annually. That’s about 11.5% higher than the national average ($12,144).

While our analysis shows that people are beginning to retire a bit earlier, it’s important for D.C. residents to have plenty of retirement savings. The area’s cost of living is high and living off Social Security alone is virtually impossible. After all, the average Social Security recipient nationwide receives just $1,238.12 per month (as of August 2016).

Georgia’s average retirement age has increased since 2015. Last year it was 62. This year, our data shows that the average Georgia resident retires at age 63.

When workers in the Peach State finally decide to retire, they’ll be happy to know that their Social Security retirement benefits won’t be taxed. In fact, Georgia is one of the most tax-friendly states in the country for retirees.

In a single year, the average retirement age in Hawaii rose from 63 to 64. Homeowners in the state have some of the lowest property tax rates in the country but annual housing costs are 40.3% higher than the national average. So if you’re planning on retiring beside a sandy Hawaiian beach, that’s something you’ll need to keep in mind.

The average retirement age in New York is 63. Last year, it was 64.

New York state is expensive, even if you’re outside of New York City. On average, residents spend $14,760 on housing-related costs each year. That’s 19.4% higher than what the average American spends on costs like property taxes, rent and homeowners insurance.

But living in New York has its perks, especially if you choose to retire there. Retirees don’t pay taxes on their Social Security income and retirement account withdrawals are only partially taxed.

North Dakota’s average retirement age is 64, up from 63 in 2015. We found that 9% of the state’s residents are still working at age 80. That’s higher than the national labor force participation rate for people that age (6%).

Folks who don’t mind putting off retirement might be able to find jobs in one of the state’s top industries, like manufacturing or agriculture. While North Dakota’s unemployment rate has recently begun to increase, it’s still low, indicating that the state has one of the strongest economies in the country.

On average, workers in Virginia retire later (64) than their counterparts in neighboring states like North Carolina and West Virginia. In fact, Virginia is surrounded by states with the youngest average retirement ages in the U.S. Since 2015, the state’s unemployment rate has fallen, suggesting that employees might be willing to stick around a little while longer if there are jobs available. 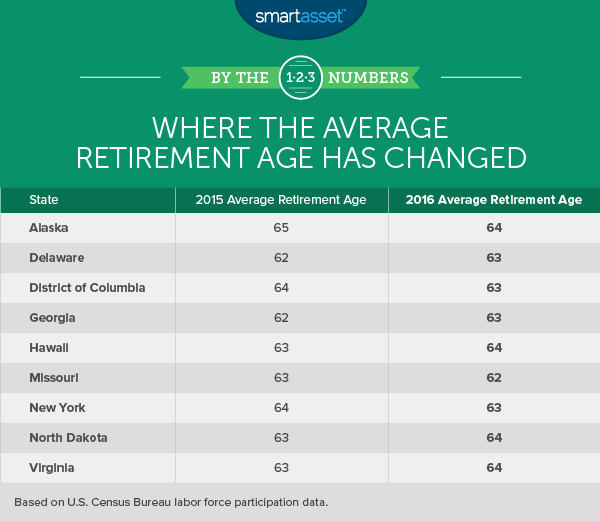 How We Calculated the Average Retirement Age