The Average Retirement Age in Every State in 2015 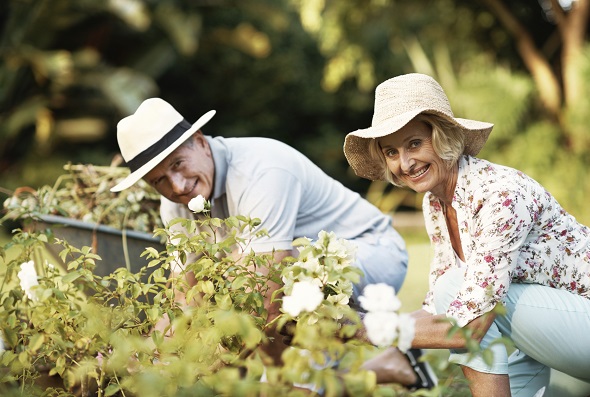 Choosing the right retirement age is as difficult as it is important. A premature retirement can also cost you a chunk of your annual Social Security income. Retiring too early could leave you short on savings years into your retirement. Regardless of when you retire, you’ll want to stick to a retirement budget to ensure your spending stays in line with your savings.

Read the 2016 version of our annual study on the average retirement age in every state.

If you wait too long to retire though, you may miss out on some of the experiences you have planned for your golden years. Sticking with your job once you’re ready to retire can be stressful and exhausting.

So when is the right time to retire? While the answer to that question will vary from one person to the next, it helps to know what others around you are doing. The “Full Retirement Age” in order to claim 100% of your Social Security benefits is between 65-67 (depending on when you were born). Likewise, Medicare eligibility begins at age 65. Historically, however, most Americans have left the workforce some time before age 65.

Indeed, SmartAsset’s analysis of U.S. Census Bureau data found that the national average retirement age is 63 years old. At the state level, it ranges from 62 to 65. (Read more about our methodology below.)

SmartAsset’s free retirement calculator can help you decide when to retire.

What will your retirement look like? Talk to a financial advisor in your area. 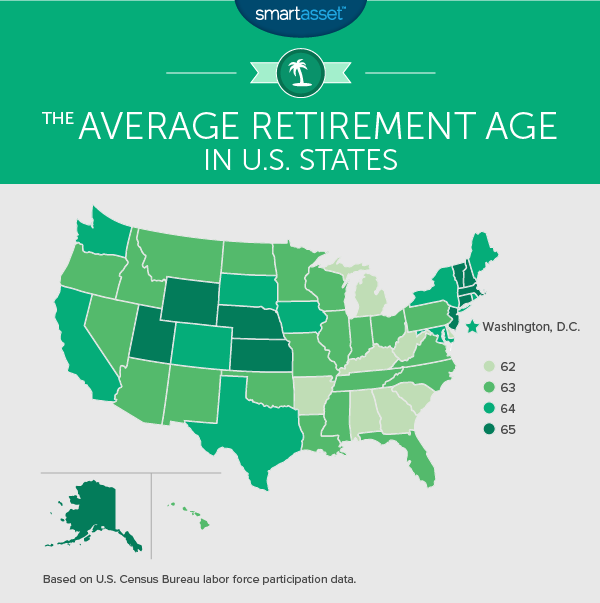 The Cornhusker State is one of the top agricultural producers in the U.S. It also consistently has one of the lowest unemployment rates of any state. That means fewer workers who are out of a job and who therefore may be forced into an early retirement for a lack of options.

New Jersey is one of the most expensive states and has some of the most restrictive retirement taxes of any state. The states high taxes and high cost of living may act as an incentive to people in the Garden State to put off retirement longer. Those who want to retire early may also simply move elsewhere to do so.

Education and health services are the largest sectors in the Massachusetts economy. The Boston area is the state’s economic engine. Housing costs in Massachusetts average over $16,000 annually, among the highest in the U.S. That may make an early retirement more difficult.

Like New Jersey, Connecticut rates among the least tax-friendly states for retirees in the U.S. It does not exempt retirement income from pensions or retirement accounts, which are taxed at rates from 3% to 6.7%. As compared with other states, this may provide extra incentive for seniors to keep working later into their 60s.

Wyoming is a largely blue collar state. It is the country’s largest producer of coal. It also has among the lowest unemployment rates of any state. More than half of Wyoming’s population works through age 64.

Vermont, New Hampshire and Alaska all rank among the most expensive U.S. states to live in, while Utah and Kansas are closer to the national average. The labor market in those states may have an effect on retirement, as both states have unemployment rates well below the national average.

The median annual housing expense for people living in West Virginia is just $7,780. That’s the lowest of any U.S. state. Those low costs may make an early retirement more realistic for those who are living on a tight budget.

Find out now: How tax-friendly is Michigan for retirees?

That means more people who can’t find work. If those workers are close to retirement age, they may wind up leaving the workforce entirely. Currently, more than half of Michigan residents are retired by age 62.

In our study of taxes and living expenses, the Bluegrass State rated as the best state for an early retirement, so no surprise that it also has an early average retirement age. The state’s $41,000 deduction on retirement income likely serves as an incentive for those who decide to leave the workforce early.

Annual housing costs in Arkansas rank as the second lowest of any state (behind Kentucky). The state also fully exempts all Social Security income, which means it may be possible to live off Social Security alone, even for those who retire early and take the 25% cut on their benefits.

The average retirement age in the Palmetto State is 62 years old. At that point, according to SmartAsset’s analysis, more than half of the state’s residents are no longer a part of the labor force. This may reflect the relatively high unemployment rate in recent years. South Carolina is also relatively affordable, which makes an early retirement more realistic financially.

Like the other states with an average retirement age of 62, Alabama and Georgia both have relatively affordable housing. In Delaware, housing costs are more expensive, although property taxes and sales taxes are quite low. (The state has no sales tax.) That may make an early retirement a more attractive option for many.

The labor force participation rate is the percentage of people who are a part of the labor force in any way. That includes part-time workers, unemployed workers who are searching for a job and others who are temporarily out of work.

The data showed that at around age 50 labor force participation begins to fall. As people age, they stop working. Eventually, as demonstrated in the chart below, more people are out of the labor force than in it. 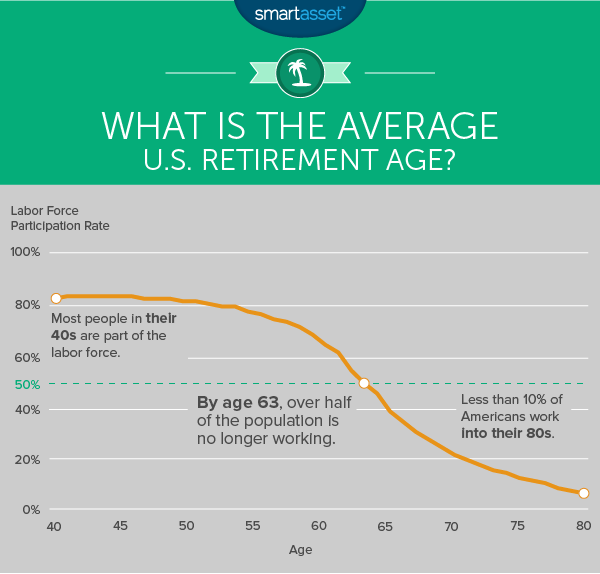 Note that this is a snapshot of how things stand currently. The trend of late seems to be toward later retirements, so if you are 40 years old, this average will likely be somewhat higher by the time you reach your 60s.

Likewise, while less than 10% of people in their 80s are part of the labor force today, that may change in the future as more seniors opt for a worktirement, whether for personal or financial reasons.

It is important to note that even for the 40-something age cohort, labor force participation is well below 100%. About 18% of people who are in their 40s are not part of the labor force. This may be for medical reasons or because, after a period of unemployment, they have given up on finding a job. Stay-at-home parents are also excluded from the labor force.

Read the 2016 version of this analysis.

1. Some calculations of the average retirement age only consider people who are currently retired, averaging the age at which they left the labor force. This can skew the true average toward an earlier age by excluding people who are putting off retirement until later. SmartAsset’s calculation takes everyone — retired and not — into account.