The Top Ten Cities for Creatives in 2016

Attracting a vibrant creative class has been a boon to many U.S. cities. While creatives are drawn to the cultural offerings of a city, they also tend to seek out affordable locales. For this year’s study of the best cities for creatives, we ranked cities based on the concentration of creatives in the population and on cost of living to create our creative cities index.

This is SmartAsset’s second annual study of the best cities for creatives. To take a look at the 2015 rankings, head here.

To find the best cities for creatives SmartAsset used data from the Bureau of Labor Statistics (BLS) that lists the number of people in each of several occupations in American metros. We totaled the number of people in 28 creative jobs for each metro area in the BLS data set. These include jobs like photographers, dancers, actors, architects and the like.

Find out now: Should I rent or buy a home? 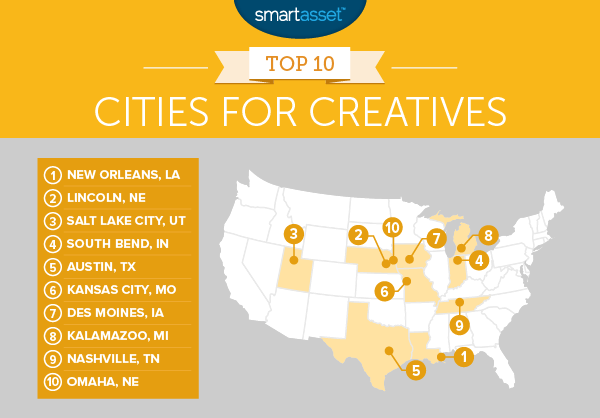 For the second year in a row New Orleans came in first in our list of the top ten cities for creatives. The combination of a high concentration of creatives and a low cost of living proved unbeatable once again. With 109 creatives per 10,000 New Orleans’ creatives score was the highest in our study. The cost of living is 94% of the national average.

Nebraska’s low cost of living earned it two spots on our top ten list. First up is Lincoln. In 2015 NPR called Lincoln a “nearly recession-proof city.” The city boasts a low unemployment rate and reasonable housing costs. What’s not to love? In Lincoln there are 88 creatives per 10,000 and the cost of living is 91% of the national average.

Salt Lake City is another economic success story. Forbes called the city “the new gold standard,” citing its diverse and growing local economy. Cost of living in Salt Lake City is 96% of the national average and there are 102 creatives per 10,000 workers.

South Bend used to be a company town, the home of car-maker Studebaker. When the Studebaker jobs dried up the city had to reinvent itself. It managed to do so successfully, and its steady growth has drawn creatives and other workers from around the country. The presence of Notre Dame university has been a boon to South Bend, both creating and attracting talent. South Bend has 78 creatives per 10,000 and a cost of living that’s 89% of the national average.

The presence of Austin, Texas on our top ten list shouldn’t come as a surprise. The city is famous for its music scene, and the growth of the local startup economy has helped attract creatives in other, non-performing fields, too. Time will tell if the city can keep its cost of living low and retain the accessibility that helped its cultural scene thrive. Currently there are 96 creatives per 10,000 and the city’s cost of living is 96% of the national average.

Kansas City is another music town that has a lot to offer creatives. In fact, the Kansas City Area Development Council calls KC “America’s Creative Crossroads.” Kansas City’s cost of living is 94% of the national average and the city boasts 90 creatives per 10,000.

The Atlantic recently called moving to Des Moines “the most hipster thing you can do.” Politico ran an article about Des Moines titled “How America’s Dullest City Got Cool.” Sensing a trend? It makes sense. Des Moines’ cost of living is 90% of the national average and the city has 77 creatives per 10,000.

Kalamazoo boasts 65 creatives per 10,000 people and its cost of living is just 85% of the national average. It’s also one of the cities with the highest real minimum wage. Kalamazoo’s population grew by 4% between 2010 and 2015, according to the Census Bureau.

Related Article: 13 Things to Know Before Moving to Nashville

The Greater Omaha Chamber of Commerce has a motto for Omaha: “We Don’t Coast.” It’s both a play on the city’s inland location and a testament to its entrepreneurial spirit. As if you needed another reason to move there, the city is home to an annual Ugly Sweater Run. Omaha’s cost of living is 91% of the national average and there are 76 creatives per 10,000. 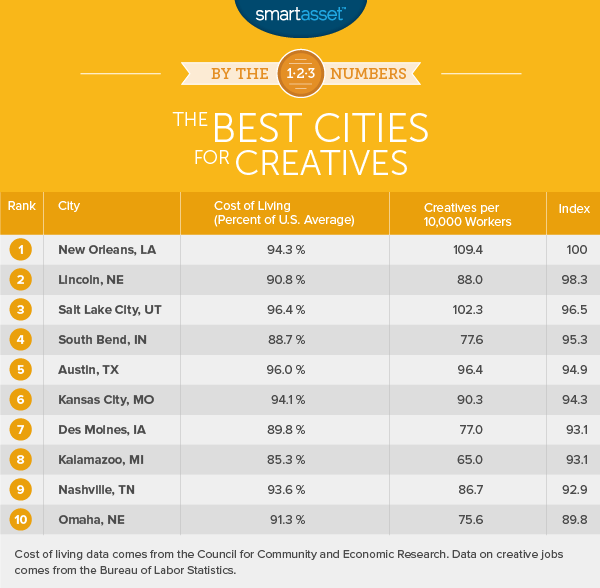 To find the top ten cities for creatives, we pulled BLS data on the number of people in each of 28 creative professions in 421 metro areas. Those professions were: Art Directors; Craft Artists; Fine Artists, Including Painters, Sculptors, and Illustrators; Multimedia Artists and Animators; Artists and Related Workers, All Other; Commercial and Industrial Designers; Floral Designers; Graphic Designers; Interior Designers; Set and Exhibit Designers; Designers, All Other; Actors; Producers and Directors; Choreographers; Music Directors and Composers; Musicians and Singers; Entertainers and Performers, Sports and Related Workers, All Other; Editors; Writers and Authors; Sound Engineering Technicians; Photographers; Film and Video Editors; Dancers; Fashion Designers; Reporters and Correspondents; Art, Drama, and Music Teachers, Postsecondary; Curators; Architects.

For each city we totaled the number of people in each of the 28 professions, divided it by the total number of workers as listed in the BLS data and multiplied by 10,000 to get the concentration of creatives per 10,000.