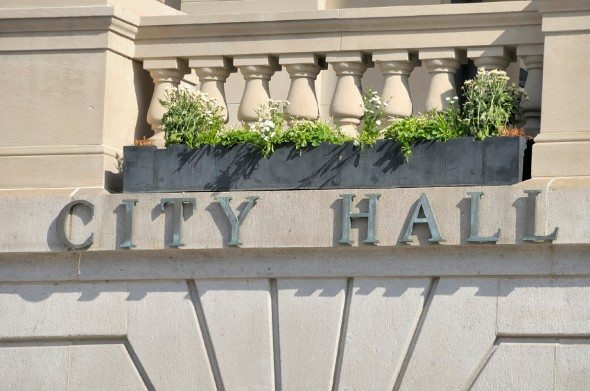 This is SmartAsset’s second annual study of the cities with the highest and lowest real minimum wage. Check out the 2015 rankings here.

What does the “real” minimum wage mean? In this case, “real” means adjusted for cost of living. Our study took minimum wage data from a variety of sources to compile the minimum wage laws across all 50 states and the cities that have enacted their own minimum wage ordinances. We then pulled city cost of living index data from the Council for Community and Economic Research (C2ER). 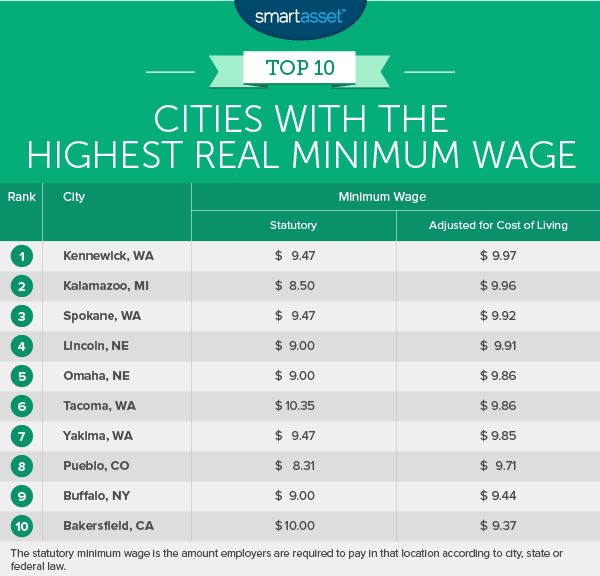 Once again Kennewick, Washington takes top honors as the city in our study with the highest real minimum wage. Located in southeastern Washington, Kennewick is part of the Tri-Cities urban cluster, along with Pasco and Richland. Kennewick’s below-average cost of living and the high Washington state minimum wage earned it top honors in our study.

Since SmartAsset’s 2015 study, the minimum wage in Michigan has increased from $8.15 to $8.50. As a result of this increase and Kalamazoo’s below-average cost of living, Kalamazoo has climbed in our ranking and now claims the #2 spot for the city with the second-highest real minimum wage. In January of 2017 Michigan’s minimum wage will climb again, to $8.90, and in January of 2018 the rate will rise to $9.25. However, a 2015 bill signed into law by Governor Rick Snyder prohibits municipalities from setting local minimum wages above the state minimum.

Spokane is another city in Eastern Washington that boasts a below-average cost of living and benefits from Washington’s high state minimum wage of $9.47. Though winters in Spokane can be gloomy, the city has a lot going for it.

Omaha is another Nebraska city that has benefited from the statewide minimum wage increase. Omaha’s cost of living is a 91 on the C2ER’s index, where 100 is the average. That gives Omaha an adjusted minimum wage of $9.86. Before the 2014 ballot initiative that set Nebraska’s minimum wage hike in motion, Nebraska had never had a state minimum wage that exceeded the federal minimum.

The $9.47 statutory minimum wage in Yakima becomes $9.85 when you adjust for the city’s below-average cost of living. That’s good news for Yakima, located in the agricultural heartland of the Yakima Valley. According to the Greater Yakima Chamber of Commerce, Yakima’s main employer is the Yakima Valley Memorial Hospital.

Currently, New York’s statewide minimum wage is $9. Adjusting for Buffalo’s low cost of living gets you a real minimum wage of $9.44. Expect that number to rise next year, however. New York Governor Andrew Cuomo signed into law a gradual state minimum wage hike that will eventually reach $15. The pace of the increase varies by location, with the fastest increase slated for New York City and the slowest increase in upstate New York.

Related Article: The Cost of Living in California 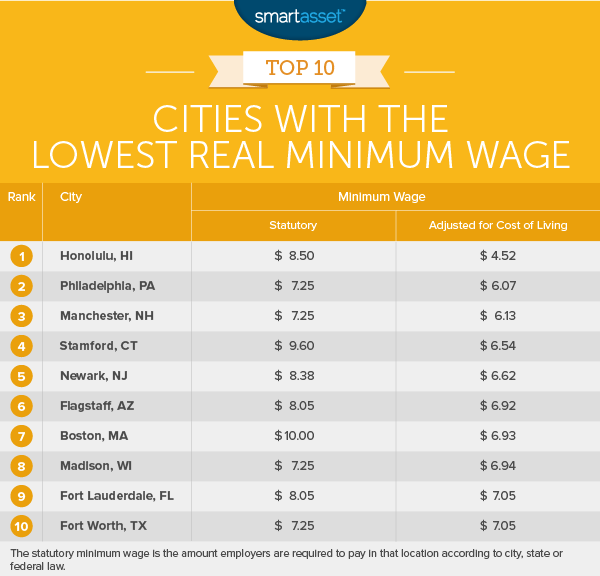 Philadelphia’s minimum wage is the same as the federal minimum wage, $7.25. That doesn’t go very far in the expensive city, which has a cost of living index of 119.5. Municipalities in Pennsylvania are prohibited from setting their own, higher minimum wages, except for workers on city contracts (which the mayor of Pittsburgh has done). Efforts to raise the state’s minimum wage through the legislature have failed, but the Pennsylvania Governor raised the minimum wage to $10.15 for state government employees and workers on jobs contracted by the state.

The poverty rate in Newark is notoriously high, and a recent SmartAsset study found that Newark has the highest percentage of residents spending 50% or more of household income on housing costs. When you adjust for a cost of living index of 126.6, Newark’s statutory minimum wage of $8.38 translates to a real minimum wage of just $6.62.

Texas is another state that defaults to the federal minimum wage of $7.25. Because the cost of living in Fort Worth is above average (102.8) the real minimum wage in the city is $7.05. Texas has also passed so-called “local preemption” laws that prohibit cities from passing minimum wage laws that push the minimum wage higher than the state minimum.

To find the cities with the highest and lowest real minimum wage SmartAsset pulled minimum wage data for cities and states from a variety of sources, including the UC Berkeley Labor Center’s Inventory of U.S. City and County Minimum Wage Ordinances and the National Conference of State Legislatures. Some states have a different, higher minimum wage for larger companies. In those cases, we used the lowest minimum wage in the state (i.e. the one that applies to small businesses).

Our cost of living data was the 2015 annual average Cost of Living Index from the Council for Community and Economic Research (C2ER).