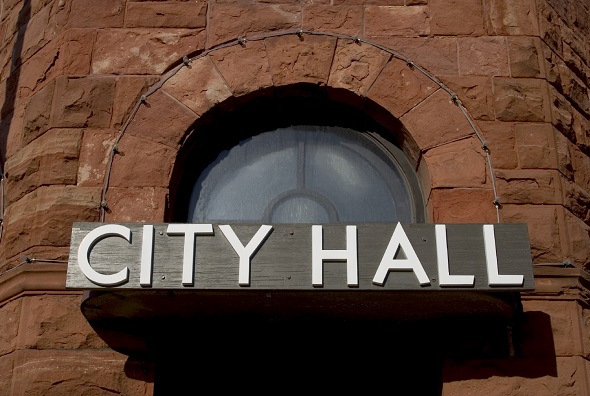 Over the past several years cities such as Seattle, San Francisco and Los Angeles have opted to enact their own minimum wage laws in lieu of increases at the state or federal level. Part of the logic behind these increases is that living costs in cities are higher, making it harder to survive on a low income. An hourly wage that may be adequate to pay for basic expenses like housing and food in rural areas may fall short for people who live within city limits.

So which cities have the highest minimum wage in terms of purchasing power (that is, adjusted for the cost of living)? And, conversely, where does this “real” minimum wage fall short?

To answer those questions, SmartAsset collected data on state and city minimum wages from around the country. Then, for 141 of the largest cities in the U.S., we adjusted the applicable local minimum wage according to the local cost of living.1

In our initial analysis, we used the current minimum wage (as of August 2015) in each city. For cities and states that differentiate between large and small employers, we used the large employer wage.

For example, in Seattle the current large-employer minimum wage is $11 per hour and the cost of living is over 20% higher than the national average. Thus, in terms of purchasing power, the minimum wage in Seattle is about $8.38. That is the “real” minimum wage. It ranks as the 37th highest of the cities we examined.

Since many cities and states have enacted legislation that calls for regular increases in the minimum wage over the next several years, we also wanted to see where things will stand once those increase schedules are complete. We applied the same cost of living analysis to every city’s future maximum rate (or the current rate for cities where no increases are scheduled) and re-ranked according to these future rates.2

The Northeast is falling behind. Five of the ten cities with the lowest real minimum wage are located in the Northeast: Philadelphia, Stamford, Boston, Newark and Portland (Maine). Furthermore, while most low-wage West Coast cities are planning future wage increases (see Anchorage and Los Angeles, for example), these northeast cities have no such plans in the works (although state-level increases are planned in Connecticut and Massachusetts). 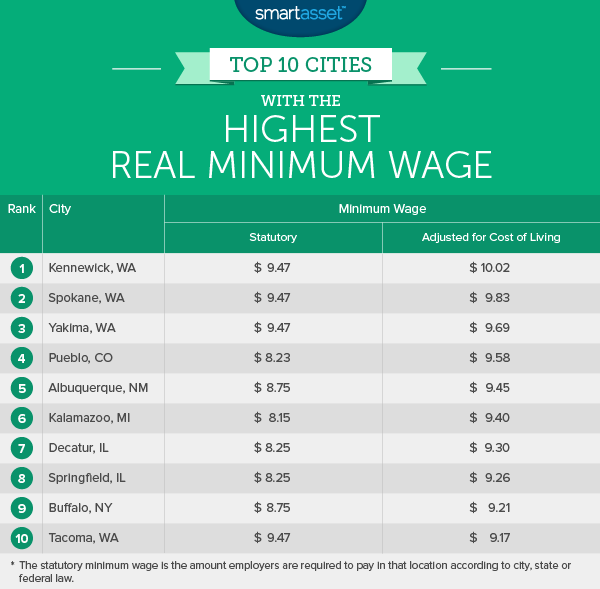 Kennewick is the largest of the cities located in Eastern Washington’s Tri-Cities region. Along with Pasco and Richland (the other two), it may be the very best city in the country for workers who are living on the minimum wage.

There are two reasons for that. The first is that Washington State has the highest minimum wage of any U.S. state, at $9.47 an hour. Meanwhile, the Tri-Cities area has the lowest cost of living of any major metro in Washington, with living expenses 5.5% lower than the national average. Thus, workers in Kennewick enjoy a real minimum wage closer to $10.02 per hour.

For the second-ranked city in our study we head about 140 miles northeast to Spokane, the largest city in Eastern Washington. The cost of living in the Lilac City is about 3.7% below the national average. That makes it a little easier for workers living on Washington’s $9.47 minimum wage to afford basic expenses like rent and health insurance.

The Yakima Valley produces a significant portion of the nation’s apples and hops and the city of Yakima is the region’s economic hub. Minimum wage workers in Yakima earn $9.47 an hour, but when considering the city’s slightly lower-than-average living costs that is equal to $9.69 in purchasing power. That’s the third highest real minimum wage in the country.

The Colorado Constitution (Article XVIII, Section 15) requires that the state’s minimum wage is adjusted annually for inflation. That ensures that if living costs rise, wages paid to low-income workers do too. While many major cities in Colorado have above-average living expenses, the cost of living in Pueblo is 14% below the national average. That means the state’s $8.23 minimum wage goes a lot further.

Albuquerque was the first major U.S. city to enact its own minimum wage law. The ordinance was passed in 2006 and called for regular minimum wage increases up to January 2013, when it would reach $8.50 per hour. Thereafter, the wage would be annually adjusted based on changes in the Consumer Price Index. Today, the city’s minimum wage is $8.75.

In 2014, Michigan lawmakers passed legislation that will gradually increase the minimum wage to $9.25 from its previously level of $7.40. The first of those increases took place on Labor Day of last year, with the wage rising to its current rate of $8.15. Future increases will take place on the first day of the year through 2018, when it will reach its maximum and be tied to inflation. That’s great news for Kalamazoo workers, who face the lowest cost of living of any major Michigan city.

The Illinois state minimum wage is $8.25 per hour, 14th highest in the country. Earlier this year, the Illinois state Senate passed a bill that would increase that wage to $11 but that bill has yet to pass the state house. If that bill does pass, Decatur may well one day have the highest real minimum wage in the country. Even without that increase, minimum wage workers in Decatur, where the cost of living is 11.3% lower than the national, are earning a cost-of-living-adjusted wage of about $9.30 per hour.

SmartAsset’s analysis found that the purchasing power of the minimum wage in Tacoma is $9.17. That’s slightly lower than the nominal minimum wage ($9.47 per hour, the state rate) as Tacoma’s cost of living is about 3% higher than the national average. Yet, it still ranks as the tenth highest in the country and it soon may rise even higher than that.

In November, Tacoma residents will cast their votes for a ballot initiative to increase the city’s minimum wage to $15 per hour, following in the footsteps of nearby Seattle and SeaTac. If that initiative passes, Tacoma would likely have the highest cost-of-living-adjusted minimum wage in the U.S. 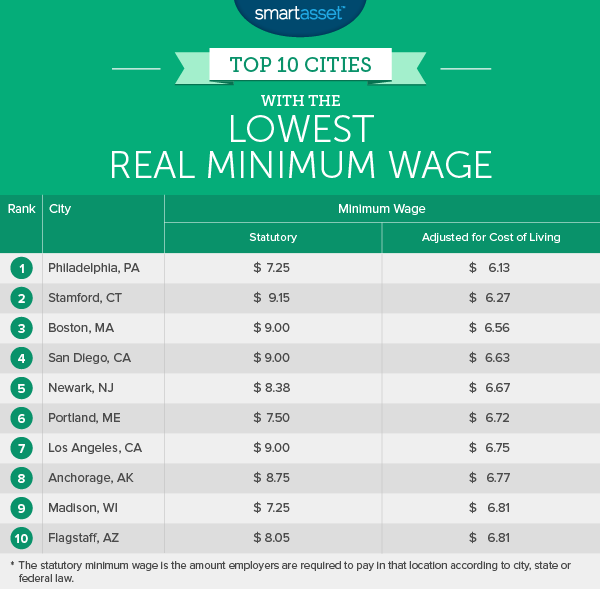 The minimum wage in Pennsylvania is $7.25, equal to the federal minimum wage. In Philadelphia, where the cost of living is nearly 20% higher than the national average, that hourly minimum has a purchasing power of just $6.12. That’s the lowest of any city in our study and its equal to an annual income of about $12,730.

While Connecticut’s minimum wage ranks as the fourth highest in the country at $9.15 an hour, that is not enough to overcome the high cost of living in Stamford. According to the Council for Community and Economic Research, living expenses in Stamford are 45.9% higher than the national average. Thus, the real minimum wage in Stamford is closer to $6.27 an hour.

According to rentjungle.com, the average rent on a one bedroom apartment in Boston is $2,085. At the state minimum wage of $9 per hour, a worker would need to work about 58 hours per week in order to pay that average rent.

Even if a full-time minimum wage worker were able to find an apartment at half that rate, she would need to spend over 70% of her income on rent alone. (Owning a home would be out of the question.) There is relief coming, however. The Massachusetts minimum wage will be increasing to $11 an hour over the next two years.

San Diego has been on something of a minimum wage roller coaster in recent years. Following two city council votes, a mayoral veto and a last-minute signature petition drive, San Diego will have to wait until June 2016 to decide once and for all whether or not its minimum wage will increase to $11.50 an hour.

In the meantime, workers will continue to earn the state minimum wage. It is currently set at $9.00 an hour and will increase to $10 an hour in 2016. Even that number may change, however. The California State Senate recently approved a bill that would increase the state minimum to $13 an hour.

All of which is good news for minimum wage workers in San Diego. Given the city’s high cost of living, the purchasing power of the current minimum wage is just $6.63 an hour, fourth lowest of any city in SmartAsset’s study.

The minimum wage in New Jersey is chained to the Consumer Price Index, which means that when the cost of living in the state increases, so does the minimum wage. The current minimum wage in the Garden State is $8.38 an hour, 13th highest in the U.S. Yet, in Newark, where living costs exceed the national average by 25%, that wage has a purchasing power of just $6.67.

In July of this year, the Portland City Council voted to approve a citywide minimum wage of $10.10 in 2016, which will increase to $10.68 in 2017. When that happens, Portland’s cost-of-living-adjusted minimum wage will jump from the sixth lowest in the country to the 12th highest.

Los Angeles is one of several cities that has adopted a plan to eventually increase the city minimum wage to $15 an hour. That increase will be implemented over the course of five years beginning in 2016 when the wage will rise to $10.50. In the meantime, minimum-wage workers will continue to face some of the highest living costs in the country, which reduce the purchasing power of the current $9 an hour minimum wage to $6.75.

Anchorage does not have its own minimum wage, which means the statewide minimum wage applies. The Alaska minimum wage is currently $8.75 but is set to rise to $9.75 in 2016. It also bears mentioning that permanent Alaska residents benefit from a state tax system that pays out annual dividend checks, often exceeding $1,000, just for living in the state.

Cities and other local governments in Wisconsin are specifically prohibited from enacting minimum wage laws that differ from the state minimum of $7.25.

That means that if voters or legislators in Madison wanted to increase the city’s minimum wage, they could not. Indeed, a 2014 ballot measure in Dane County (in which Madison is located) called for the state to increase the minimum wage to $10.10. It passed with over 70% of the vote.

Like Wisconsin, Arizona has a law that prevents local governments from enacting their own minimum wage laws. Recently, a group of Flagstaff residents challenged that law in the courts, citing Flagstaff’s high cost of living.

Our analysis confirms that minimum wage workers in Flagstaff earn significantly less – in terms of purchasing power – than those elsewhere in the state. The cost-of-living-adjusted minimum wage in Flagstaff is $6.81, as compared with $8.31 in Tucson and $8.41 in Phoenix.

Many of the cities and states listed above have scheduled major minimum wage increases in coming years. With that in mind, SmartAsset wanted to see where things will stand when the dust settles. Assuming no further changes in city, state or federal minimum wage laws and assuming no changes in the cost of living in any of these cities (two major assumptions, we know), here are the Top Ten Cities with the Highest Real Minimum Wage for the year 2020. 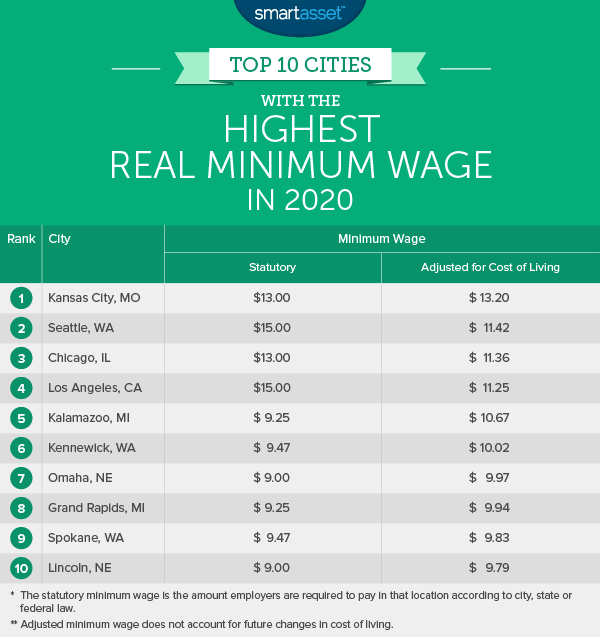 Read the 2016 edition of SmartAsset’s study on the cities with the highest and lowest real minimum wage.

1. Cost of living data comes from the Council for Community and Economic Research.

2. This portion of the analyses is inherently flawed, as the cost of living in all of these cities is sure to change over the next several years, especially given the changing wages.