The Least-Stressed Cities in America – 2017 Edition 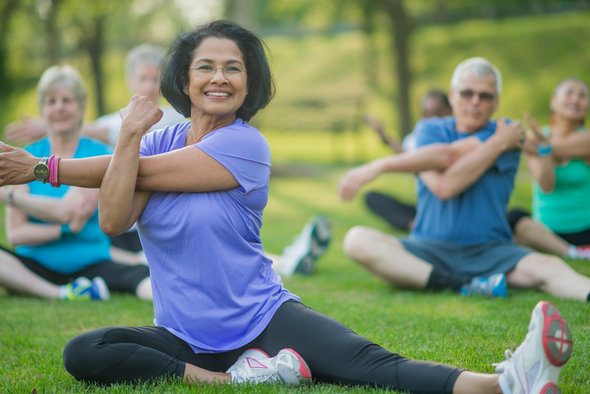 Stress can be hard to avoid. In fact trying to avoid stress can itself be stressful. Almost everyone is worried about how much sleep they are getting or how many workouts they are missing. For many Americans, wondering if they can afford their home is a stressful experience. But, it doesn’t have to be this way. Some cities offer a less stressful environment for their residents. Below we rank the least-stressed cities in America.

In order to rank the least-stressed cities in America, we gather data on nine factors. We looked at average hours residents work per week, average commute times, percent of residents who are getting sufficient physical activity, density of entertainment establishments, unemployment rate, bankruptcy rate, housing costs as a percent of income, average amount of sleep per night and the divorce rate.

This is SmartAsset’s third annual study on the least-stressed cities. Check out the 2016 rankings here. 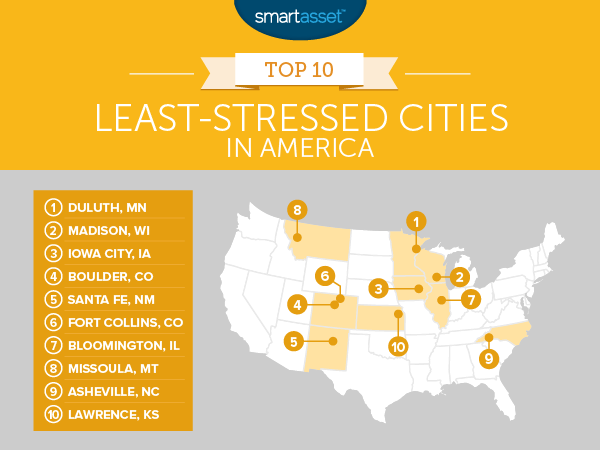 Duluth took the top spot for the least-stressed city in America, jumping up from third in last year’s study. One of the benefits of working in Duluth is the relatively short work weeks. The average work week in Duluth is 35 hours, a slight increase from last year.

If you worked less what sort of things might you do? Sleep more? That is exactly what Duluth residents seem to do. The average resident here comes pretty close to getting the recommended eight hours per night, sleeping an average of 7.2 hours per night. That’s the fifth-most in the country. If this has convinced you to move to Duluth, be aware that the income taxes in Minnesota are high.

Madison rose two spots from last year’s list to rank second. Mad City is a great place to destress because of how fun it can be and because of the ample opportunities to get in physical activity. Over 63% of residents here get a sufficient amount of physical exercise, making it one of the most fitness-friendly cities in the country. This city also has around 21 entertainment establishments for every 1,000 businesses in the area. For that metric Madison ranked 36th in our study.

The only concern which might keep Madison residents from getting their average of 7.02 hours of sleep per night is the slightly high housing costs. The median housing cost would eat up 23% of the median household’s income. For that metric Madison ranked 182nd (out of 512 cities), its worst score.

If you’re frustrated by long work weeks and wish you could spend less time commuting, Iowa City may be the destination for you. The average work week is only 32.9 hours and the average commute is only 15.7 minutes long. Compare this commute time to that of residents in Antioch, Texas, who have an average commute of 46 minutes. This means that Antioch residents, over the course of a whole year, spend over 15 days’ worth of time commuting to work compared to Iowa City residents. How stressful!

If employment is a big stressor in your life, you may want to skip on Iowa City. This city has an unemployment rate of 6.4%, which is high compared to other options in our top 10.

Boulder, one of the most livable college towns in America, is claiming more accolades. The average work week here is pretty short, only 34.2 hours per week. That’s the 10th-shortest in our study. A benefit of not spending all your time working is that you can put that time toward other things, like sleeping or physical activity. Average Boulder residents get the 24th-most sleep in the country and over 63% of them get a sufficient amount of physical activity.

It’s also a fun place to live. Boulder has about 23 entertainment places for every 1,000 establishments

Santa Fe is one of the fittest cities in the country. Over 65% of residents here get a sufficient amount of physical activity. Physical activity is a great way to blow off steam and de-stress. Staying active and fit also leads to less health concerns as you age. But Santa Fe is more than just a place to get a workout in. The city also has the 10th-highest density of entertainment establishments in the study.

Not all is rosy in this desert city, though. Santa Fe has the highest rate of divorced residents in the study.

Another Colorado city takes sixth. Fort Collins ranked highly because of great scores in physical activity, average time spent working and average hours of sleep per night. It ranked in the top 50 for each of those metrics.

But economic concerns may be a constant thorn in the side of Fort Collins’ residents. This city has a relatively high bankruptcy rate of 0.2%.

If you’re looking for somewhere affordable where the commute times are not long, Bloomington, Illinois could be for you. The average commute time here is only 14.5 minutes, and average home costs only eat up around 22% of the average household’s income.

Missoula, a city located in western Montana, takes eighth. Residents here can point to the fitness-friendly environment for why this city ranks so high. Over 65% of residents here get the recommended amount of weekly physical activity.

Residents are also doing a good job getting a good night’s sleep. The average resident here snoozes for about 7.17 hours per day, 10th-most in the study.

Living in a stress-free environment means more than living a Zen life style. It also means living in a place where it is possible to both relax but also have fun. Asheville is a good mix of relaxing – residents here get the eighth-most amount of sleep in the study – and fun. Asheville has the 43rd-highest rate of entertainment establishments per 1,000 businesses.

Lawrence, Kansas rounds out our list. By moving to Lawrence, you can take advantage of the short, 35.8-hour average work week. At the same time while living in Lawrence you don’t have to stress out too much about keeping your job. This city has an unemployment rate below 4%.

Plus, the divorce rate in Lawrence is also low. Only 8.49% of residents living in Lawrence are divorced. 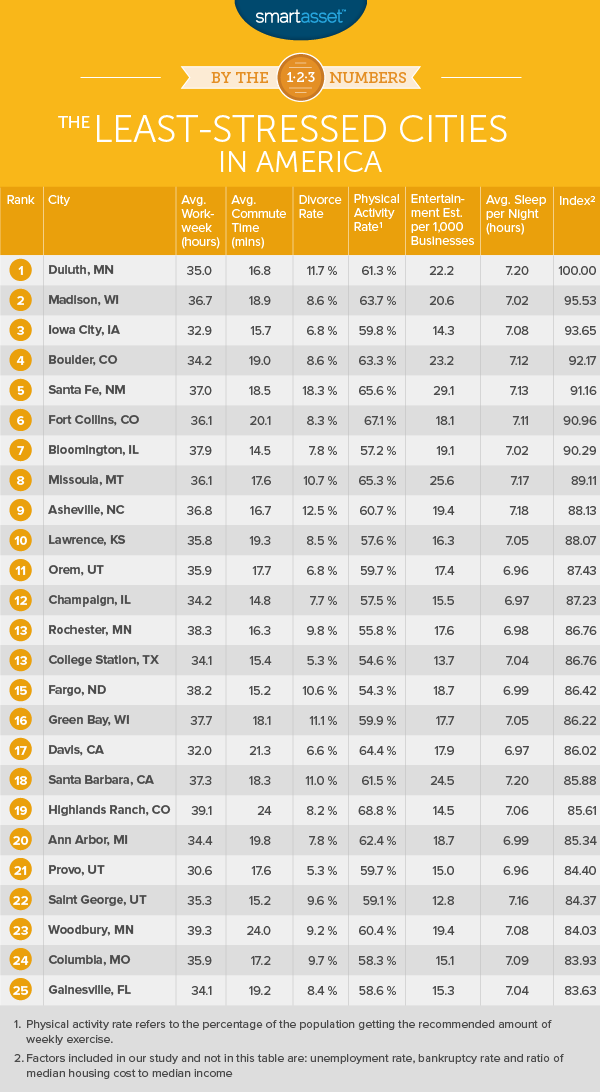 Just thinking about the financial repercussions of an emergency like getting into a car accident or losing your job causes many people a lot of stress. But it doesn’t have to be this way. There are steps you can take to prepare for a financial emergency.

The first step in being prepared is to have an emergency stash of cash saved up. Most experts recommend having an emergency fund large enough to sustain you for three – six months. By having this in your back pocket (or your savings account) you don’t need to worry quite as much about what would happen if, say, you needed to make emergency car repairs or you lost your job.

If you find yourself constantly stressing about whether or not you can afford something, it’s probably a good idea to create a budget. A detailed budget will allow you to know exactly where all your money is going and can show you exactly what you can and cannot afford. You may want to practice the 50/30/20 budget. According to this model, you spend 50% of your income on necessities like housing transportation and food, 30% on entertainment and the other 20% goes to savings. By sticking to these rules you are better able to judge what you can and cannot afford.