The Most Fitness-Friendly Cities for 2016

According to a survey by Nielson, the top two New Year’s resolutions in 2015 were both fitness-related. The number one resolution, claimed by 37% of survey respondents, was “stay fit and healthy,” followed by “lose weight” with 32%.

This is SmartAsset’s second annual study of the Most Fitness-Friendly Cities in America. Read the 2017 version here.

Those are admirable goals, but as the year progresses it can be difficult to put in the effort required to meet them. Among the potential obstacles to our fitness priorities: work, Netflix, cold weather, school and pizza. The list goes on.

At SmartAsset, we specialize in helping people achieve difficult goals such as homeownership and early retirement. Physical fitness is as laudable (and important) a goal as any. With that in mind, we set about to find America’s most fitness-friendly cities for 2016. These are the places that make it easiest to stick to your health goals in the new year.

To locate these cities, SmartAsset collected data on nearly 300 of the country’s largest metro areas. We looked at five different metrics of fitness friendliness including the number of fitness professionals, the number of gyms and rec centers, the average hourly wage of personal trainers and the number of fast food joints in each city. (Read more about our methodology below.) 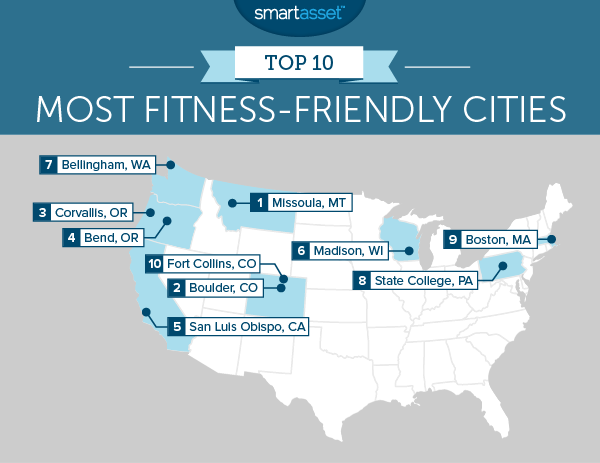 After ranking fourth in last year’s study, Missoula moves into the top spot for 2016. The city’s proximity to a multitude of national parks and forests means there are plenty of opportunities for outdoor recreation, including mountain climbing, kayaking, rock climbing and trail running.

When bad weather strikes there are still good options for exercise in Missoula. It ranked second in SmartAsset’s analysis for its concentration of fitness-related businesses. For example, there are 18 different recreation or fitness centers in Missoula, which has a population of about 70,000 people.

The top-ranked city in 2015, Boulder once again ranks in the top two. It lost its hold in the top spot largely because of the relatively high price of personal fitness trainers in the area. The average hourly income for fitness trainers in Boulder is $21.87, which ranks as the 30th highest of the 293 cities in SmartAsset’s study.

In all other regards, however, Boulder rates extremely well for its fitness-friendliness. It has the eighth highest concentration of fitness professionals of any city in America. Plus, temptations in Boulder are scarce. Fast food joints account for just 35% of the city’s restaurants, 22nd lowest of the areas in our study.

One of the easiest ways to get in shape is by walking or biking to work. This ensures that you get some physical activity on a daily basis, but in many cities it is hard or impossible to do because of distance, weather or a lack of infrastructure.

Not Corvallis. 17% of commuters in the city get to work by either walking or biking. That’s the highest rate of any city in SmartAsset’s study.

This central Oregon city once again ranks as among the top ten most fitness-friendly cities in America, moving up two spots from last year’s ranking. Along with a high number of fitness outfitters, Bend has the 13th highest concentration of fitness professionals of any U.S. city. There are 41 fitness trainers or aerobics instructors for every 10,000 members of the workforce in Bend.

Located 11 miles from the Pacific Ocean in hilly central California, San Luis Obispo ranks as the fifth best place to get in shape in 2016. When the sun is shining (which it usually is), the Nine Sisters chain of mountains offers the perfect set of day hikes, ranging from relatively short and easy to difficult.

Want to move to California? Find out what your taxes will be first.

Downtown Madison is situated between two large lakes, Lake Mendota and Lake Monona. In the summer these provide the perfect arena for kayaking, sailing and other watersports. Winter activities include cross country skiing, ice hockey and, for the truly adventurous, snowkiting.

For those who would rather stay indoors when the mercury falls, the Madison area is home to 106 fitness and recreational sports centers, according to the Bureau of Labor Statistics.

The home of the famous Ski to Sea Race once again ranks as a top ten city for fitness-friendliness. Like the race (which is a team really that involves seven legs covering nearly 100 miles between Mount Baker and the Puget Sound), the city of Bellingham has a little something for everyone.

Skiers can take advantage of some of the snowiest slopes in America on nearby Mount Baker and the region is home to a number of large parks that are perfect for hiking or running. If you’re seeking an adventure on open water, the San Juan Islands, located due west of Bellingham Bay, can provide the perfect place for a beautiful but challenging kayaking voyage.

While not everyone in Happy Valley is a champion gymnast, the city still has a large population of  fitness experts. State College ranked 21st in our study for its concentration of fitness professionals. According to the Bureau of Labor Statistics, there are 220 fitness trainers and aerobics instructors working in State College.

Boston rates as the most fitness-friendly big city in the country. It compares favorably to places like New York City (which ranked 115th) and Chicago (which ranked 242nd). There are over 5,300 fitness trainers and aerobics instructors in Boston. Likewise, the area is home to more than 800 recreation and fitness centers.

Training for a marathon requires strenuous exercise over the course of many weeks. Setting the goal of completing the 26.2-mile race can therefore be a great way to push oneself into a healthier lifestyle.

As the home of the Colorado Marathon, a Boston Marathon qualifier, Fort Collins is the ideal place to pursue distance-running glory. Runners can stretch their legs on any of the region’s many trails or hit the treadmill at one of the 43 recreation and fitness centers in Fort Collins. 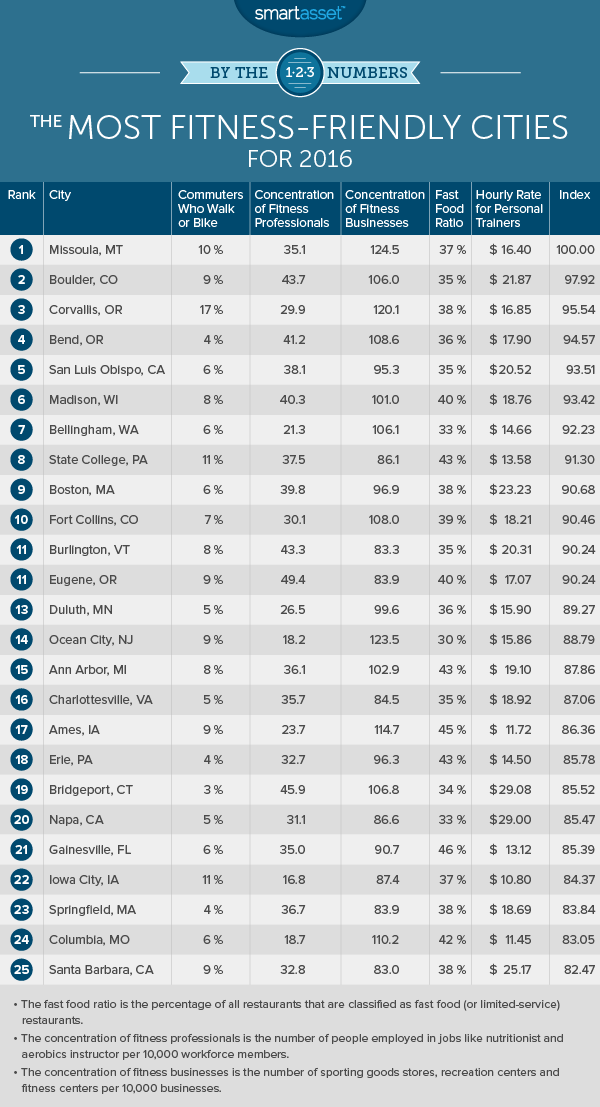 To find the most fitness-friendly cities for 2016, SmartAsset collected data on 293 of the largest metropolitan areas in the United States. We considered five metrics in total. The following three metrics were the basis of last year’s study:

For 2016, we also considered the following two metrics in order to provide a broader measurement of fitness friendliness in each city:

We ranked each city according to these five metrics. We then averaged those rankings, applying half-weight to the measure reflecting the hourly wage of personal trainers and full weight to all other metrics.

Lastly, we assigned an index score based on that average. The city with the best average scored a perfect 100 and ranked first overall. Lower scores reflect lower rankings across the five metrics in SmartAsset’s analysis.

Read the 2017 version of SmartAsset’s study of the most fitness-friendly cities in America.