The Best Places to Work in Manufacturing – 2017 Edition 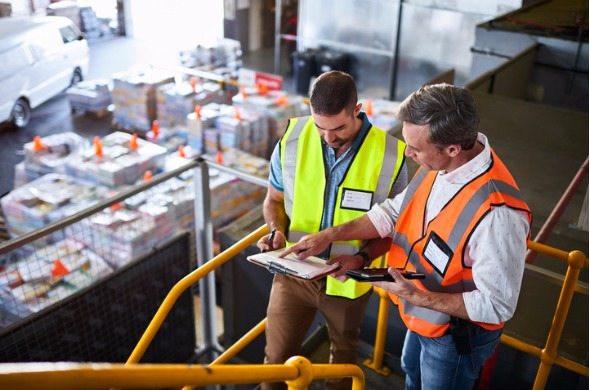 For long periods in this nation’s history manufacturing was the dominant industry, providing jobs and financial security for wide swaths of the population. Today manufacturing is not the force it once was with service jobs being the go-to occupation for many workers. This movement of manufacturing jobs out of America became a big political issue the 2016 presidential election. In some places across America however, manufacturing industries are still thriving.

Ready to buy a home? Check out mortgage rates.

This is our second annual study on the best places to work in manufacturing. Check out the 2016 version here. 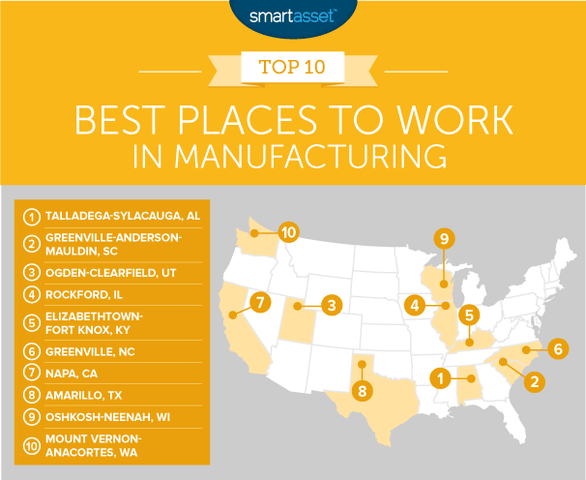 A large chunk of the workforce in this Alabama metro area work in manufacturing – just over 39%. Only three other metro areas in this study can beat this stat.

Greenville-Anderson-Mauldin takes second place due to strong growth in manufacturing employment over the past few years. From 2010 – 2015, the number of manufacturing jobs in the area grew by 37.8%, a figure beaten by only 5% of metro areas in our study.

The growth in jobs is accompanied by growing incomes. From 2014 to 2015 the average income for a manufacturing worker here grew by 14.7%. That’s the 13th-fastest rate.

Ogden rose in the ranks from ninth last year to third this year. From 2010 to 2015, the number of manufacturing jobs around Ogden-Clearfield grew by an impressive 55%. Of course, having a job is one thing, but you also want to make sure you are being paid well. Over that same time period incomes for manufacturing workers grew by 31%.

After paying for the median house, we estimate that the average manufacturing worker in Ogden-Clearfield would earn $45,600. Hopefully that’s enough for workers to start saving for retirement.

In the past, Rockford was known as a manufacturing hub which produced heavy machinery and tools. While the area has declined since in heyday, Rockford is still a great place to work in manufacturing. About 25% of all workers in Rockford are employed in the manufacturing industry.

Plus, working in manufacturing pays well here. We estimate that after paying for housing, the average manufacturing worker would have about $54,000 left. Of course, some of that will be going to the local tax man. Illinois has a flat income tax rate of 3.75%.

Elizabethtown-Fort Knox, located in central Kentucky, has a strong manufacturing economy. Census data from 2015 shows 7,000 people work in manufacturing or about 17% of all workers. That number may continue to rise in the future. From 2010 to 2015, the number of manufacturing jobs here grew 41%. In just one year, from 2014 to 2015, it grew by 7%.

One concern for manufacturing workers here may be their pay package. According to our data, they earn $42,800, on average, after accounting for housing costs. That’s the lowest figure in the top 10.

However only 9.4% of workers in this metro area work in the manufacturing industry, a score which lowered Greenville’s overall ranking.

You might know Napa for its wine. Indeed, Napa is mostly a wine-producing region but that is one of the reasons it ranks so high in this study. About 11,500 people are employed in the manufacturing industry in Napa, 8,000 of whom are employed by wineries. Overall about 18.6% of employed people in Napa worked in manufacturing as of 2015.

Amarillo takes eighth. This metro area is located in north Texas. It scored well in three growth metrics which propelled it up the ranks of this study. From 2010 – 2015, the average manufacturing worker saw their income grow by almost 39%, or the eighth-fastest rate in the study.

Just about 22,000 people in Oshkosh-Neenah are employed in the manufacturing industry. Paper manufacturing and transportation equipment manufacturing are the most popular industries, with 4,776 and 4,679 employed workers, respectively.

Oshkosh-Neenah scored well in this study because of its density of manufacturing work. According to our data, about a quarter of all workers are employed in manufacturing, a number which may rise in the coming years. From 2014 – 2015 the number of manufacturing jobs grew by 12%.

Mount Vernon-Anacortes takes the final spot in our top 10, thanks to above-average scores in every metric. This metro area’s best scores are income related. From 2014 – 2015, the average income for manufacturing workers increased by 5%. Mount Vernon-Anacortes ranks in the top 20% of all cities in both those metrics.

We estimate that manufacturing workers earn about $49,000 after accounting for housing costs. Plus, Washington has no state income tax, meaning those workers should be able to keep a decent chunk of their paychecks. 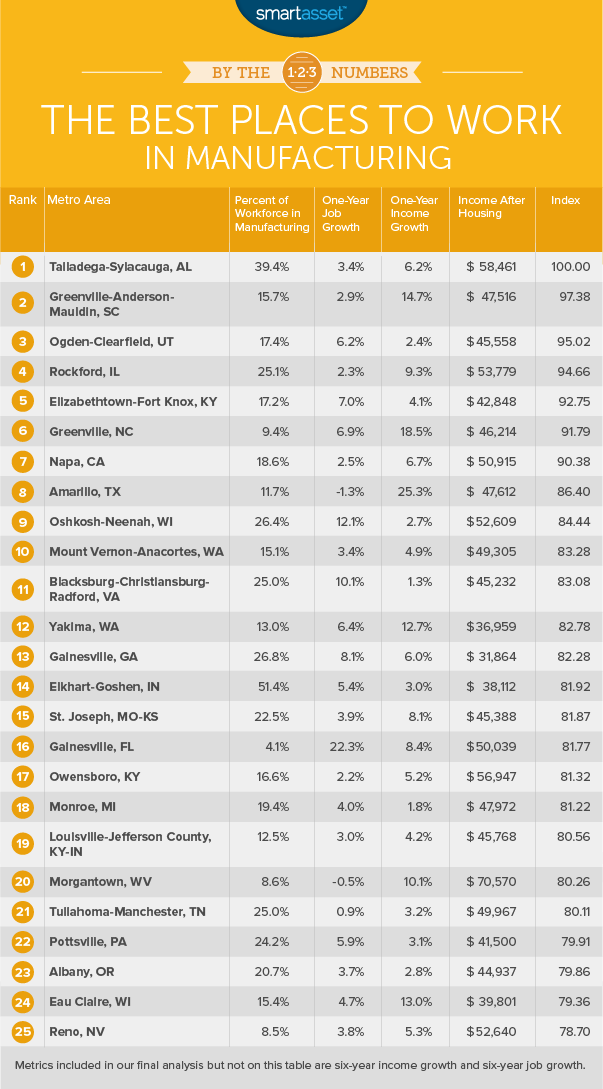 In order to find the best places to work in manufacturing, we looked at data on 483 metro areas. Specifically, we looked the following six factors:

Tips for Moving for a Manufacturing Job

As manufacturing jobs move around the country, the people best able to take advantage of the changing industry are those willing to move. Here are some tips for making a smart financial move.