The Best Cities for Diversity in STEM – 2017 Edition 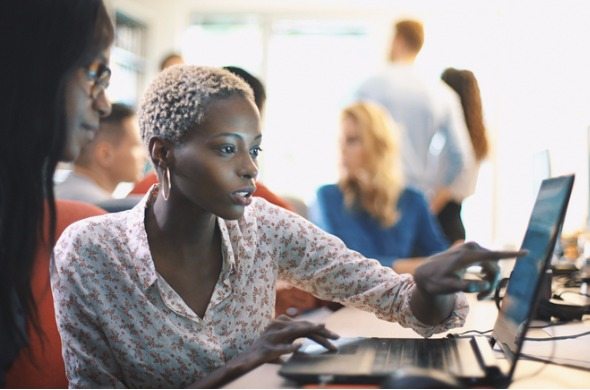 STEM jobs are some of the most desired in the country. These jobs tend to offer the best pay and the best benefits. However, as inequality remains a problem in American society, more people are starting to focus on who are employed in these fields. This issue recently came to the fore when Google let go of an employee who released an anti-diversity memo. Below we look through the data to find the best cities for diversity in STEM.

In order to find the best cities for diversity in STEM, we looked at data for the 50 cities with the largest STEM workforce. We analyzed this workforce to see who had the biggest racial diversity and gender diversity. Check out our data and methodology below to see where we got our data and how we put it together.

This is the third annual version of this study. Check out the 2016 version here. 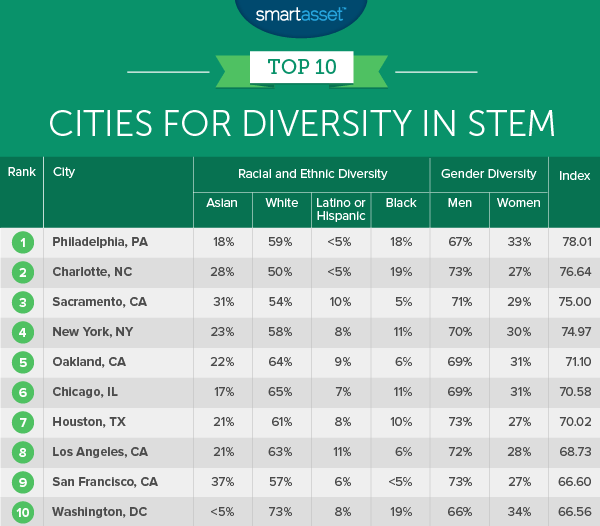 The City of Brotherly Love jumps four spots to first. This city scored high in both racial diversity and gender diversity. Women make up around 33% of the total STEM workforce. That is the fourth-highest in our study.

Around 18% of people employed in STEM jobs here are black which is the third-highest rate in our top 10. This helped give Philadelphia the fourth-best racial diversity score.

One way Sacramento could improve its score in this city is by hiring more women. Only about 29% of workers here are female.

New York is known as a place which has traditionally supported a wide variety of workers. According to data from the Census that remains true. About 11% of the STEM workforce in New York is black, 23% is Asian and 8% is Latino. That leaves 58% of STEM employees who are white.

This city scores slightly better than Sacramento in terms of gender diversity. About 30% of STEM workers in New York are women. What is particularly troubling about that statistic is that working age women actually outnumber working age men in New York by about 200,000.

One good sign for women, despite not being perfectly well represented in STEM, is that they tend to earn similar amounts as their male colleagues. Full-time working woman earn about $52,600 per year and full-time working men earn $54,300 in Oakland.

Women also make up 31% of the STEM workforce which is not a large amount in absolute terms (woman make up about half the workforce in Chicago), but compares favorably to other cities on this list.

However, more women could probably be hired in STEM jobs in the City of Angels. Women only make up 27.5% of the STEM workforce.

San Francisco has a top 10 racially diverse STEM workforce. One area it could improve its score in our race index is by hiring more black workers. Less than 5% of the San Francisco STEM work force is black. That is the lowest rate in our top 10.

But at the same time San Francisco also has the largest concentration of Asians in the STEM workforce in our top 10. Around 37% of STEM workers in San Francisco are Asian.

The nation’s capital rounds out our top 10. The STEM workforce here is largely dominated by white workers which hurts its racial diversity index. Around 73% of STEM workers here are white. What D.C. does well is support women in tech. Washington, D.C. has the third-highest rate of women in the STEM workforce at 34%. 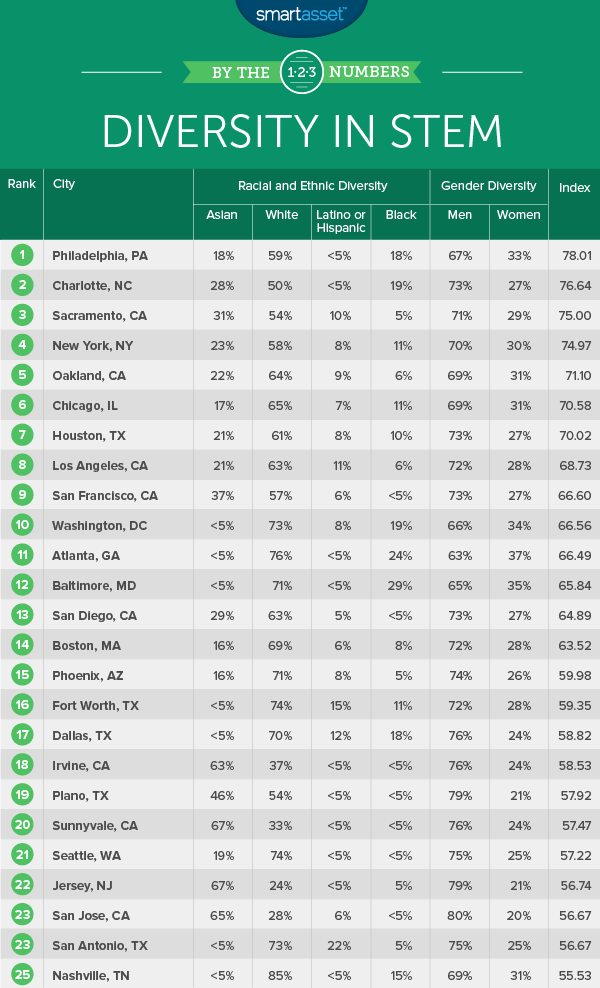 To find the cities with the most diverse STEM workforce, we looked at data on the 50 cities with the largest STEM work forces. Specifically, we compared them across the following two metrics:

We then averaged these two indexes to create our final score, which we used to rank our cities.

Data for both metrics came from the Census Bureau’s 2016 1-Year American Community Survey.

Tips for Moving to a New City for a Career Switch