The Best Cities for Conferences in 2017 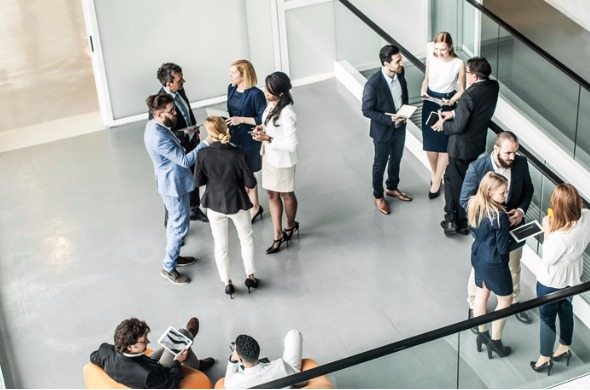 Conferences bring together like-minded individuals for the chance to trade information, network and conduct business. Conferences are also an economic boon to the cities which welcome them, filling local hotels, exhibition halls and restaurants with paying customers. But not all cities are equally well set up to host conferences and receive this economic bounty. Below SmartAsset digs into the numbers to rank the best cities for conferences.

Moving to a new city? Find out if you should be renting or buying.

In order to rank the best cities for conferences, SmartAsset looked at data for 43 cities. Specifically we looked at data on hotels, hotel costs, meal costs, airports, crime and restaurant and entertainment establishments. Check out our data and methodology below to see where we got our data and how we put it together.

This is SmartAsset’s third annual study of the best cities for conferences. Read the 2016 version here. 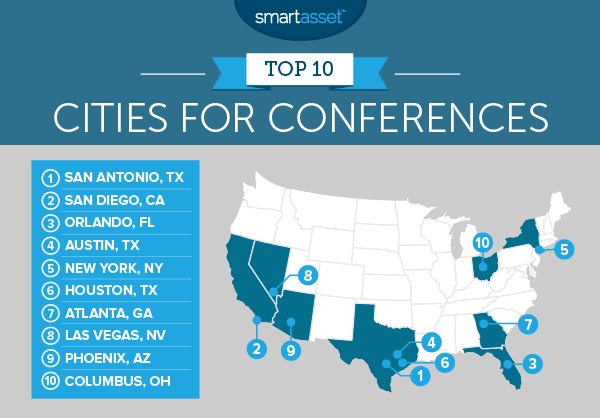 San Antonio holds onto the top spot as the best city to hold a conference. This city ranks high because of the large number of hotels and their relative affordability. There are just under 350 hotels in San Antonio, the third-most in our study. A night in a hotel in San Antonio will also only set you back about $127.

Another plus for conference attendees is the average meal cost. A meal for two at a mid-range restaurant costs $35, on average.

San Diego jumps one spot from last year’s ranking to second. This sunny city can host conferences year-round in the San Diego Convention Center, an event space which has contributed $26.4 billion to the regional economy.

This city has a good mix of medium-sized hotels (120) and large hotels (18) which allows for both large and small conventions to feel at home. In both metrics, San Diego ranks in the top 10.

Orlando is a great place to host a conference for those looking for more affordable accommodations. According to our data, the average night in a hotel around Orlando will cost about $113 per night. If you use the right hotel rewards credit card, it may cost even less.

Having a nice meal with your coworkers will also be more affordable around Orlando. A meal for two at a mid-range restaurant costs about $45, according to our data. For that metric Orlando ranks sixth overall.

The capital of Texas held steady, claiming the same rank as it had last year. Austin had good scores across the board, scoring in the top half in all but one metric.

Austin particularly ranks high in convenience. Conference schedules are usually pretty packed so any time wasted getting to and from the airport is a hassle. According to our data, it takes only 17 minutes to get from downtown Austin to Austin-Bergstrom International Airport.

New York is a great option for large conferences which need a lot of hotel rooms. According to the data, New York has the most medium-sized and large hotels in our study. Overall, according to the Census, there are 641 hotels in New York.

Of course, anyone coming to New York for a conference should be willing to spend some money. The average night in a hotel costs about $260. Meals are expensive, too. You can expect to spend about $78 at a mid-range restaurant for a meal for two. New York also has one of the largest concentrations of dining and entertainment establishments in our study.

Houston is another city with plenty of hotel space, giving it the ability to host conferences large and small. This includes the annual Offshore Technology Conference which in 2015 drew almost 95,000 attendees to the Magnolia City. Houston has 533 hotels, second-most in our study.

The city does not rank as well when it comes to entertainment options. Only about 4.1% of establishments in Houston are dedicated to entertainment and dining, the second-lowest rate in our top 10.

Hosting a conference in Atlanta is a smart move. Our data shows this city has plenty of hotel space with 243 hotels, 124 of which are medium-sized. In both those metrics, Atlanta ranks in the top 10.

Getting from downtown Atlanta to Hartsfield–Jackson Atlanta International Airport should not be too difficult. We estimate that trip should take around 17 minutes by car.

Las Vegas is world-famous for hosting conferences. The city is known for having large hotels and event spaces two things which any good conference needs. However, while Las Vegas has plenty of large hotels (15 in total), it only has 136 hotels overall. For that figure it ranks in the bottom half of the study.

Vegas is boosted in the rankings due to its fun atmosphere and overall convenience. The airport is only four miles from the city center and 6.5% of all establishments are of the entertainment or dining variety.

Phoenix is an affordable destination for conference attendees. Our data shows one night in a hotel should only cost about $114. Meals shouldn’t be too pricey, either. The average cost for two people eating at a mid-tier restaurant is only $50.

One concern might be space. There are 75 medium-sized hotels in Phoenix, a below-average rate.

Columbus is the smallest city to crack the top 10. This means it may not be a great option for hosting the largest of conventions, but for medium or smaller ones this is a great city.

Staying in a hotel here costs an average of $130 per night, a rate which is more affordable than most cities in the study. Attendees of conferences in Columbus will enjoy eating out. According to data from Numbeo.com, the average price of a meal for two at a mid-tier restaurant costs $40. 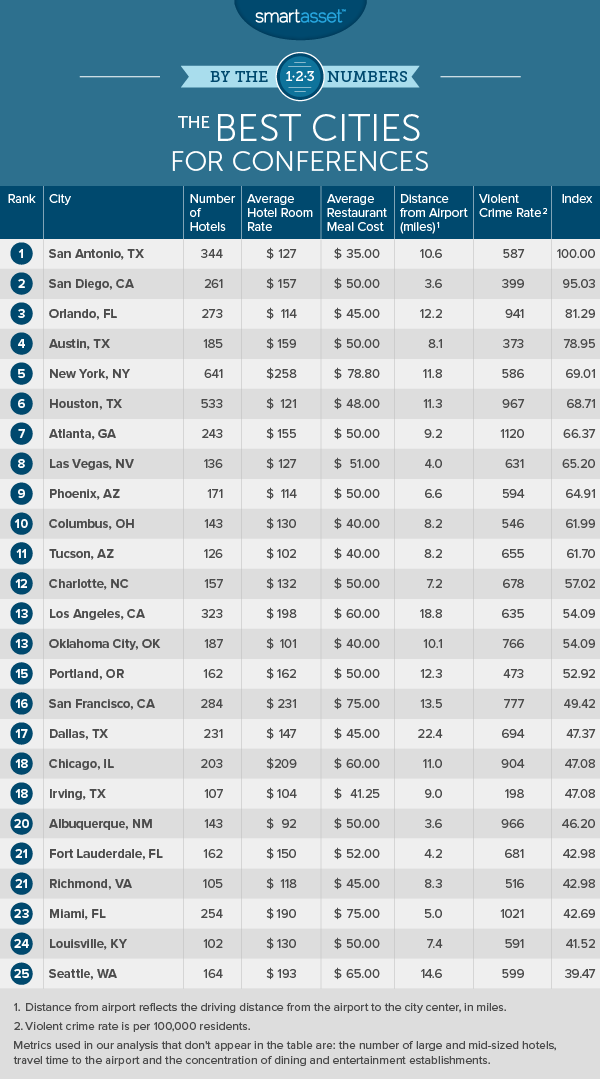 In order to find the best cities for conferences, we looked at data for the largest cities in the country filtering out any which did not have at least 100 hotels. From there we looked at the following nine metrics:

Tips for Cutting Costs as a Conference Attendee

Conferences can get expensive especially if your company is not footing the bill. But there are ways to save.

Nick Wallace did the data analysis for this study.