The Happiest Places in America – 2018 Edition 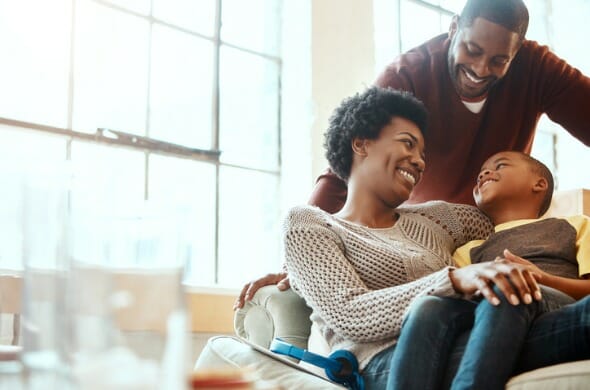 The U.S. ranked as the 18th-happiest country in the world in 2018, according to the World Happiness Report, released by the Sustainable Development Solutions Network for the U.N. That’s down four spots from the 2017 ranking. But while the U.S. may not be the happiest country in the world, there are some parts of the country that are doing exceptionally well. Thanks to factors like affordable homes, low unemployment rates and high life expectancy, some counties are happier than others. Below we look at these and other factors to rank the happiest places in America.
In order to rank the happiest places, we compared counties across eight factors. Specifically we looked at unemployment rate, poverty rate, affordability ratio, marriage rate, divorce rate, bankruptcy rate, life expectancy, and physical activity rate. Check out our data and methodology below to see where we got our data and how we put it together. 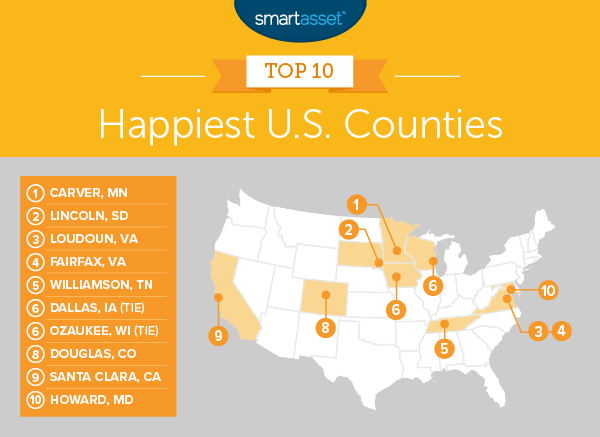 Carver County, Minnesota is the happiest place in America in 2018, after finishing in the top 5 for the past three years. In particular this area is boosted up our ranks thanks to strong economic conditions. This area has an unemployment rate of only 3.1% and a poverty rate of only 4.1%. For poverty rate this county ranks in the top 5.

Perhaps one of the most important keys to happiness is economic stability. In that metric, few counties score better than Lincoln County. This area has a poverty rate of only 3.7% and an unemployment rate under 3%.

When it comes to cost of living, Lincoln also posts high scores. According to our data, the average household earns 2.1 times more than the minimum cost of living. For that metric, this county ranks 24th. Most residents here also live long into their retirement years. The average life expectancy here is just over 83.

If Loudon wants to reclaim the top spot, this county will need to improve its bankruptcy rate. According to our data, it has the third-worst bankruptcy rate in the top 10.

Another Virginia county, which continually ranks among the happiest in the nation is Fairfax. This suburban county of the nation’s capital boasts one of the highest incomes when compared to cost of living. According to our data, the average household earns nearly 2.3 times the minimum recommended amount to live a comfortable life.

Williamson County is the first newcomer to the top 10. Last year this county finished 24th. Williamson is a suburb of Nashville and contains many happy residents. It has the highest income-to-cost-of-living ratio in our study and the second-highest marriage rate among its residents.

One area where Williamson residents could improve their score in this ranking, and their overall health, is in their physical activity rates. According to our data, less than 80% of residents here get the recommended amount of physical activity, the second-worst score in our top 10.

Dallas County is part of the Des Moines–West Des Moines, Iowa metro area and ranks well in economic and social metrics. According to data from the Bureau of Labor Statistics, this county has an unemployment rate of only 2.3%. That means there are plenty of jobs available in the area.

Another metric in Dallas County’s favor is the high marriage rate. Around 62% of residents here have found life partners and only 8.9% of residents divorced.

Ozaukee County is located within the Milwaukee-Waukesha-West Allis metro area and lies on the western coast of Lake Michigan. This county has solid scores across the board, ranking in the top 20 in four different metrics. In particular, Ozaukee has a low unemployment rate and a high marriage rate. In both of those metrics this county ranks in the top 20.

If Ozaukee wants to claim a top 5 spot next year, it will need to improve its bankruptcy rate. The county ranks 338th in that metric.

But there is more than just nature in this county. Residents here also tend to do well economically. This county has the sixth-highest income-to-cost-of-living ratio and an unemployment rate of 2.8%.

Santa Clara is the happiest county in California according to our research. Located near San Jose, this county has year-round nice weather to improve resident’s moods. Overall this county ranks well on our social metrics. Santa Clara has the seventh-highest life expectancy in the country and 84.5% of residents are physically active, a top 30 rate.

However, due to relatively high costs of living, this county does have a poverty rate which could be improved upon. According to our data, Santa Clara has a poverty rate of 9.3%, the worst rate in our top 10.

Howard County rounds out the top 10. Located in central Maryland, and part of the Baltimore-Columbia-Towson metro area, this county scores well in most of our economic metrics. In particular, this county has a low poverty rate and a high income-to-cost-of-living ratio. In each of those metrics, Howard ranks in the top 10.

One concerning metric weighing Howard down in the rankings is its high bankruptcy rate. This county ranks 406th in bankruptcy rate, the lowest in our top 10. 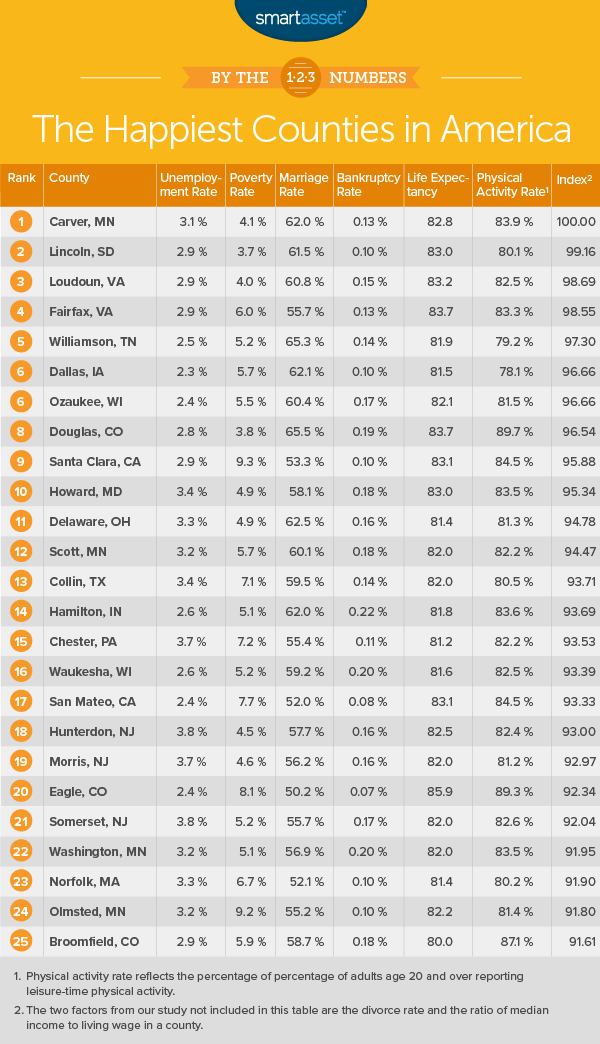 In order to rank the happiest places in America, we compared 980 counties with a population of at least 50,000. We compared them across the following eight metrics: