The Best States for the Middle Class in 2016 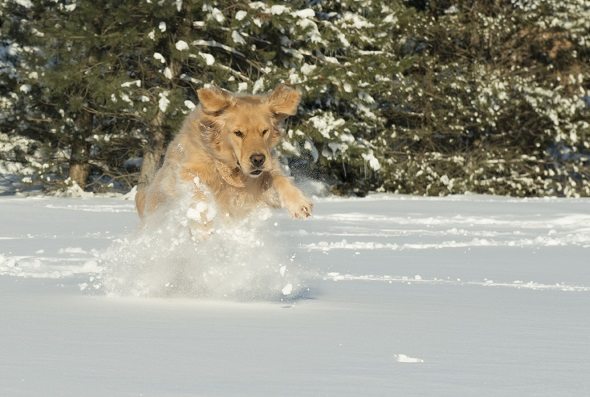 The middle class is shrinking. According to a 2015 analysis by Pew Research, for the first time in recent history less than half of American households are part of the middle class, with greater numbers of households moving into the upper and lower classes.

Likewise, while middle-income Americans used to earn more than 60% of total U.S. income, today their combined paychecks add up to just 43% of the whole pie.

In some parts of the country, however, the middle class has not been shrinking so rapidly, if at all. Indeed, in 18 states, the number of middle-class jobs has increased by more than 10% since the year 2000. On the other hand, in 14 states, the total number of such jobs has actually declined over the past 15 years.

To find the best states for middle-class families and workers, SmartAsset collected data on income, jobs, taxes and housing costs across all 50 states. We looked at the following eight metrics to gauge the size, strength and financial prospects of the middle class in each state:

Find out now: What’s the deal with Fannie Mae loans? 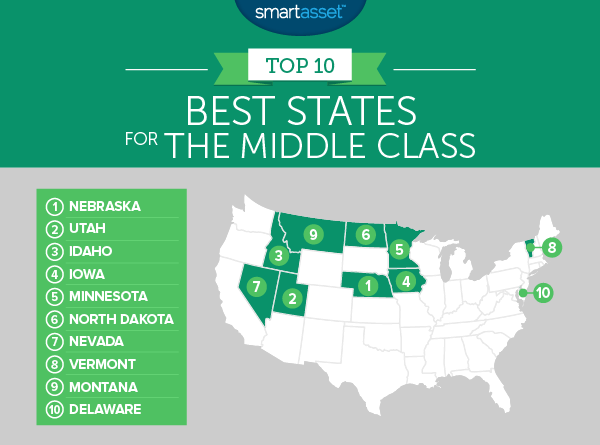 With 47.7% of households earning between $35,000 and $100,000, Nebraska has the fourth-largest middle class of any state in the country. In fact, it rates as better-than-average on all but one of the metrics SmartAsset considered.

The state has had strong middle-class job growth over the past 15 years, adding more than 51,000 jobs that earn a median income of between $30,000 and $70,000 (in 2014 dollars). That represents an increase of 14%. Middle class families should also find Nebraska’s housing market to be reasonably affordable. The median home value in the state was $133,800 on average during 2014.

The only metric for which Nebraska is worse than the average state? Property taxes. The state’s average effective property tax rate of more than 1.8% is among the 10 highest in the U.S.

No state has a larger middle class than Utah, where half of all households earn between $35,000 and $100,000 annually. The Beehive State has had some of the strongest middle class job growth over the past 15 years of any state in the U.S., adding more than 116,000 such jobs. That represents an increase of 27%, seventh highest in the nation.

A number of the most important industries in Idaho are those that have historically provided stable middle class jobs. Manufacturing is becoming an increasingly important part of the Gem State’s economy, while agriculture and tourism both continue to play a large role.

In addition to having the nation’s eighth-largest middle class (in percentage terms), Idaho also has one of the fairest tax structures for middle class taxpayers according to the Institute on Taxation and Economic Policy . It has a statewide sales tax of 6% and a progressive income tax of up to 7.4%. In all, the system rates as the fifth-most-equitable when comparing middle class tax burdens to tax burdens on the top 1% of earners.

Use our free tool to compare mortgages and find a low rate.

Like many of the top states on this list, Iowa has an unemployment rate that is well below the national average. The unemployment rate was just 3.7% as of February, tenth lowest in the U.S. That is good for middle class workers, who can be less concerned about losing their job. Iowa has the third largest middle class in the U.S., with 47.9% of households earning between $35,000 and $100,000 annually.

Minnesota’s tax system relies on a progressive income tax for a significant portion of its revenue. While the top marginal rate is 9.85%, one of the highest in the country, that rate only applies to high earners. Most middle class families face a top rate of 5.35% or 7.05%. That is a large reason that Minnesota’s tax system rates as the seventh most equitable in the country.

Middle class families in Minnesota also benefit from the state’s healthcare system. It ranks among the best in the country for its high rates of insurance coverage and on other measures of access.

Today, although the oil boom is cooling off by many measures, North Dakota’s job market remains one of the strongest in the nation. The state’s unemployment rate was 2.9% as of February 2016, third lowest in the U.S.

Nevada has the fifth-largest middle class of any state, with 47.7% of households earning between $35,000 and $100,000. Fifteen years ago, that may not have been true. The number of middle class jobs in Nevada has grown by 29% since the year 2000, far outpacing job growth in the rest of the country.

The top-ranked eastern state for the middle class, Vermont ranks among the top 10 states for both the size of its middle class and the fairness of its tax system. 47% of households earn between $35,000 and $100,000 per year in Vermont, the ninth-largest percentage of any state. Meanwhile, Vermont’s tax system rates as the sixth-fairest for middle class taxpayers.

Montana also has one of the fairest state tax systems in the country. When comparing the tax burdens of the middle 60% of earners with the top 1%, it rates as the ninth most equitable state.

Delaware has some of the lowest property taxes in the nation, with an average effective property tax rate of about 0.5%, lower than all but three states. That’s good news for middle class homeowners. It may also be one reason the Institute on Taxation and Economic Policy rated Delaware’s tax system as the second most equitable in the nation when comparing middle class tax burdens with those of the top 1%.

Data on the percentage of households earning between $35,000 and $100,000 per year comes from the U.S. Census Bureau’s American Communities Survey for 2014, as does data on the percentage of households earning less than $35,000. Data on average effective property tax rates and median home values also comes from that survey. Data on the growth in jobs that earn between $30,000 and $70,000 comes from the Bureau of Labor Statistics occupational employment statistics for the years 2000 and 2014.

The average effective income tax rate for middle class taxpayers was calculated using SmartAsset’s income tax calculator, which was built using data from federal, state and local tax forms. Data on the fairness of state tax systems comes from the Institute on Taxation and Economic Policy.