Medical science has made enormous strides over the past century. Antibiotics, vaccinations and other treatments have all but eliminated many illnesses that once claimed thousands of lives each year. Likewise, advancements in surgical techniques and technologies have pushed the survival rates on many difficult procedures, including open-heart surgery, to over 95%.

Yet as a whole, the healthcare system in the United States remains far from perfect. For example, in all but two states, more than 10% of low-income people do not have health insurance (as of 2014).

We ranked all 50 states on those six metrics. We then averaged those rankings, giving double weight to the physician access index and the prevention and treatment rank, and single weight to all other metrics.

Lastly, we calculated a score on a 100-point scale according to those average rankings. States with better average rankings received higher scores. The top overall state scored a 100.

In the market for life insurance? Compare policies here. 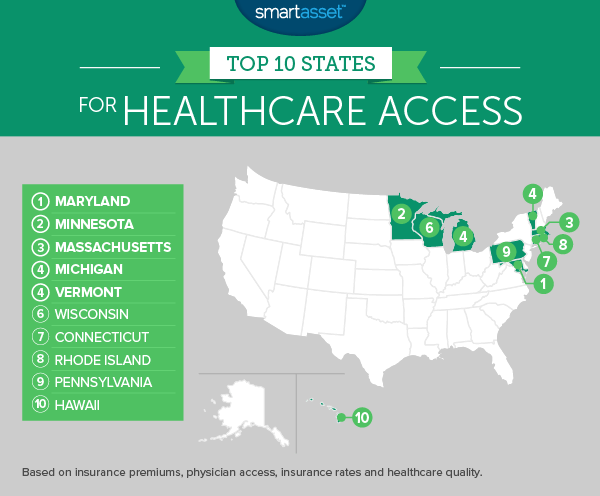 The top state for healthcare access, Maryland rated well on every single one of the metrics we considered. Its overall insurance rate and children’s insurance rate both rank among the top ten states, at 92.1% and 96.8% respectively. It also ranks in the top five for physician access.

What truly separates Maryland from other states when it come to overall healthcare access, however, is cost. While Maryland in general is fairly expensive, the state has managed to keep the cost of healthcare and the price of insurance premiums relatively low. According to the Kaiser Family Foundation, the average monthly cost of premiums is $180.40. On an annual basis, that’s equal to just 5.3% of median individual income, the lowest percentage of any state.

One reason for these low costs may be Maryland’s “all-payer” system. In such a system, all insurers (government and private) pay the same rates for services at a given hospital. It is the only state with such a system, though several European countries use similar systems.

Find out now: What is credit life insurance?

Minnesota is home to some of the best health care facilities in the world, most notably the Mayo Clinic. According to the Commonwealth Fund, the state ranks as the eighth best state for prevention and treatment. It has the lowest number of premature deaths caused by potentially treatable conditions or complications, with just 56 per 100,000 residents.

It isn’t just the quality of care that makes Minnesota a great place for healthcare access. It also has some of the highest insurance rates in the country. As of 2014, 94.1% of Minnesotans had health insurance, fourth-highest of any state.

In 2006, Massachusetts passed a first-of-its-kind healthcare law that aimed to provide health insurance to every man, woman and child in the state. That plan, which eventually became a model for the Affordable Care Act, hasn’t yet achieved its lofty goal but it has come close. Massachusetts ranks first in the country for the overall insurance rate, at 96.7%, as well as the children’s insurance rate (98.5%) and the insurance rate for people living in low-income households (94.4%).

The one area in which Massachusetts does not rate well is the cost of insurance. According to the Kaiser Family Foundation, the average price of an individual policy in the Bay State is $456.39. Even after controlling for the state’s relatively high level of income, that ranks among the highest four states in the U.S., adding to the high cost of living in cities like Boston.

Michigan ranks no lower than 16th in the U.S. on any of the seven metrics SmartAsset analyzed. It rates especially well for the price of insurance premiums. The average cost of monthly individual insurance premiums in the Great Lakes State is $203.84, ninth lowest in the U.S. On an annual basis, that’s equal to 7% of the median income in Michigan. That makes it the sixth-most affordable state for health insurance when controlling for income.

Though Vermont recently abandoned efforts to establish a first-in-the-nation single-payer healthcare system, it still ranks among the top states when it comes to access. It has particularly high rates of insurance coverage. 95% of the total population of Vermont is insured and 97.8% of children in Vermont are insured. Both of those rank second behind Massachusetts.

While Wisconsin did not adopt the Medicaid expansion provision of the Affordable Care Act, it has enacted several policies of its own to increase Medicaid coverage. So, while states that opted out of the Medicaid expansion tend to have lower rates of coverage, Wisconsin bucks this trend. Nearly 93% of Wisconsinites have health insurance, the seventh-highest percentage of any state.

The Nutmeg State ranks in the top ten for all three measures of insurance coverage that SmartAsset considered. Its overall insurance rate of 93.1% ranks sixth in the U.S., as does the 88.3% coverage rate for people in low-income households.

While the average individual premium price of $291.35 is higher than the national average, it falls when controlling for income. Someone earning the median individual income in Connecticut would spend 8.1% of her income on health insurance at that rate, 21st-lowest in the U.S.

However, even after controlling for the state’s median income, policies purchased on the individual market are still fairly expensive. The average monthly price of health insurance in New Hampshire is $328.09. That’s equal to 10% of median income, seventh-highest in the U.S.

According to the Commonwealth Fund, Pennsylvania ranks as the seventh-best U.S. state for prevention and treatment in its healthcare system. Among children ages 18-35 months in Pennsylvania, nearly 80% have received all of their recommended vaccinations, the fifth-highest rate in the U.S.

Likewise, Merritt Hawkins ranked Pennsylvania as the seventh-best U.S. state when it comes to physician access. Healthcare purchased on the private market in Pennsylvania is also fairly affordable, one reason it’s a top state for early retirement.

Long before the Affordable Care Act made universal healthcare coverage a goal on the mainland, Hawaii was the first state in the U.S. that required employers to provide health insurance to their workers. The 1974 passage of the Hawaii Prepaid Healthcare Act led to higher rates of insurance coverage and better health outcomes for the entire state. Today, the rest of the country is beginning to catch up, but Hawaii still rates among the best. Its overall rate of insurance coverage is 94.7%, third-highest in the U.S.