The Best Cities to Raise a Family in 2018 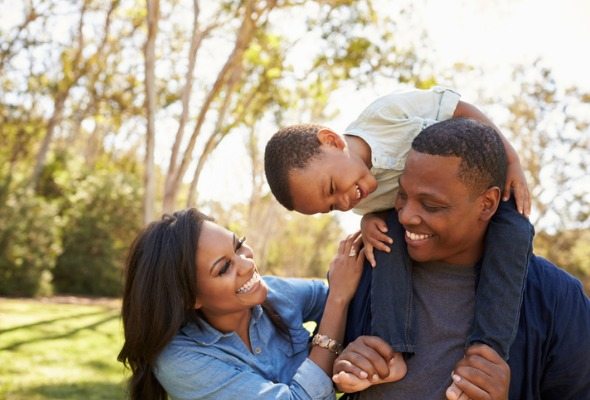 Does that mean families in the Northeast should move to the Midwest? Not necessarily, after all there are many factors to consider when deciding where to raise a family: the cost of a mortgage and child care needs to be weighed next to concerns like the quality of local schools and the area’s crime rates.

We looked at data on eight metrics to find the best cities to raise a family in 2018. We looked at data on housing cost as a percent of income, child care costs, percent of residents under the age of 19, school quality, graduation rate, poverty rate, unemployment rate and crime rate. Check out our data and methodology below to see where we got our data and how we put it together.

This is our second annual study on the best places to raise a family. Check out the 2017 version here. 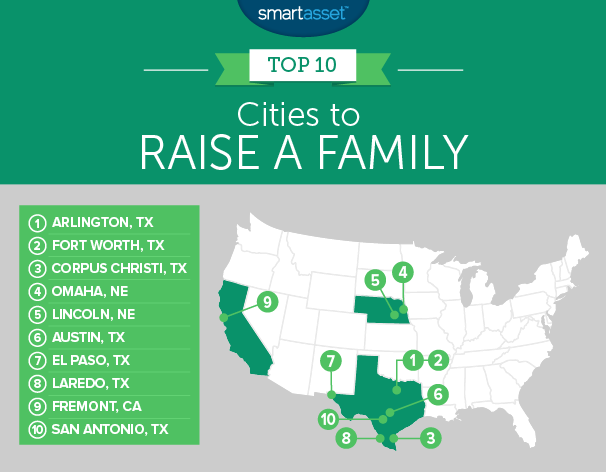 Arlington takes the top spot on the back of some impressive scores in education. Over 91% of students here graduate high school, the second-highest rate in our study. The schools in the area also do a good job preparing students for more than just graduation. The average proficiency rate in math and reading in Arlington is 75%.

Another reason to raise a family here is the relatively low cost of living. According to our data, the average home costs only 22.5% of the average household’s income. That figure is well below the affordability line.

Another city in the Dallas metro area takes second. Like in Arlington, the schools in Fort Worth score well. This city has top 10 scores for its graduation rates and the average proficiency in math and reading.

The reason you might choose Fort Worth over Arlington is that Fort Worth is a slightly younger city. Over 31% of residents in Fort Worth are under the age of 19. That means plenty of socializing and friend-making opportunities for young families in the area.

Corpus Christi takes the third spot. This city is one of the most affordable in our top 10. The average home in this city costs only 21% of the average household’s income, a top 10 rate. With less money going to housing, parents can hopefully save for retirement and contribute to their children’s college fund.

Jobs in the area are also fairly plentiful. According to our data the unemployment rate in the area is 5.9%.

Omaha is the first non-Texas city to make the list. Schools in Omaha are some of the best in the country, according to our data. Omaha schools score a 76% for average proficiency in math and reading. Finding work in this city also shouldn’t be too difficult. Omaha has an unemployment rate of 5.4%, a top 10 rate, according to Census Bureau data.

The jobs here also pay well, at least by local cost-of-living standards. Paying for the average home in Omaha costs 22% of the average household’s income.

Nebraska’s capital takes the fifth spot. Lincoln students have an average proficiency in math and reading of 80.8%, the highest in the study. However, the city’s graduation rate is on the low side and hurts its overall score. Only 82% of students in this city graduate, according to the Department of Education data, that’s the lowest score in the top 10.

Austin is another Texas cities with competitive schools. The schools around Austin rank sixth in the study for average proficiency in math and reading and first for graduation rate. But that’s not the only reason to raise a family in Austin. The economic situation is positive as well, providing jobs and relatively affordable housing. Austin has an unemployment rate of 5% and average housing costs account for just under 24% of the average household’s income.

The one metric which may give families pause is the age of residents in this city. Around 24% of residents are under the age of 19, a relatively low score for this study.

El Paso is a very safe city according to our data. This city has about 2,100 crimes for every 100,000 residents, a top 10 score. El Paso also has a young population, with plenty of children and teenagers. Over 30% of residents here are under the age of 19. Parents will also be happy to learn that its average child care costs are among the lowest in this study. Putting an infant in full-time centered-based care costs $8,500 per year. That’s a top 15 score.

Schools in El Paso do leave something to be desired, however. The city ranks below-average for both graduation rate and average proficiency in math and reading.

Laredo has the youngest population in this study. That means plenty of kids in the area and all the socializing opportunities those kids bring. Schools around Laredo are also above-average. This city ranks 16th for average proficiency in math and reading and fifth for graduation rate.

One area of concern for families in the area is the economic climate in Laredo. This city ranks 89th for poverty rate and 53rd for average housing costs as a percent of income.

Fremont is the only California city to crack our top 10. Despite being plagued by high housing costs – the median home costs $2,070 per month – households in this city do fairly well. Housing costs eat up only 22% of median household income, according to Census Bureau data. Fremont also has the lowest poverty rate in our study.

Furthermore, the city is one of the safest in the country. According to data from the FBI, Fremont has a combined violent and property crime rate of 2,176 per 100,000 residents. That’s the sixth-lowest rate in our study.

Our top 10 ends in San Antonio. San Antonio had strong scores in schooling and cost-of-living metrics. This city ranked in the top 20 for both housing costs as a percent of income and average annual child care costs. The city’s best score came in its graduation rate. Over 90% of students graduate from high school according to our data. For that metric, San Antonio ranks sixth in the study.

If San Antonio wants to climb any higher in this ranking, the city will need to improve its crime rate. San Antonio ranked 72nd in crime rate per 100,000 residents. 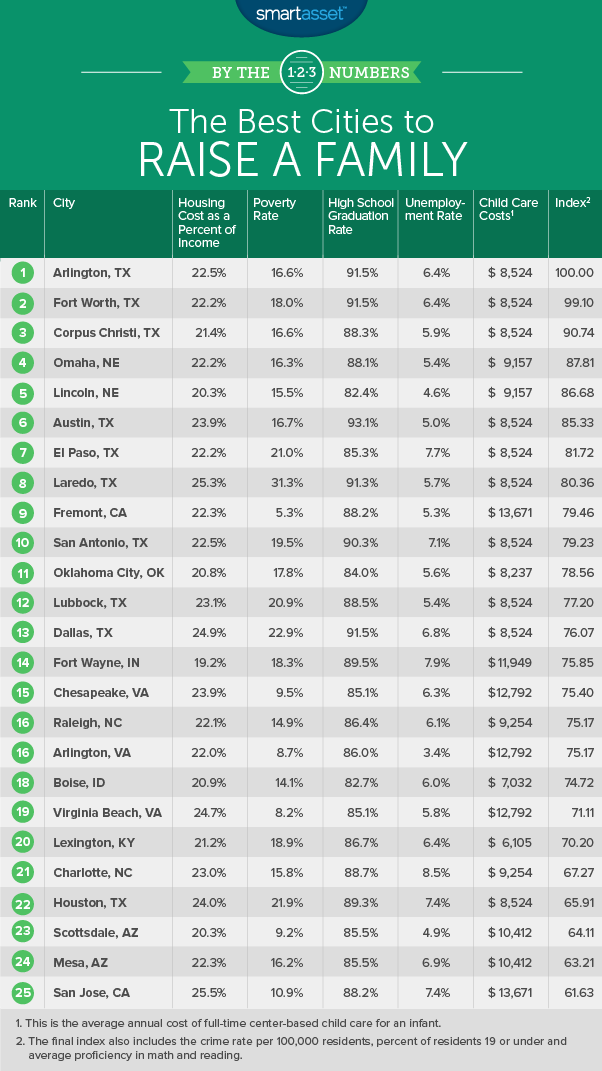 In order to rank the best cities to raise a family, we looked at data on 91 of the largest 100 cities in the country. We compared them across the following eight metrics:

Tips for Affording a Family Home

With child care costs and housing costs rising it is more important than ever that families find affordable housing for themselves.