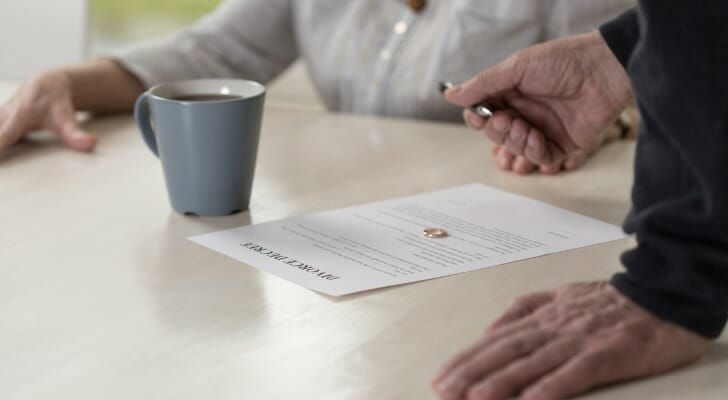 Since the 1990s, the divorce rate for adults 50 and older in the United States has roughly doubled, according to findings from the Pew Research Center. In fact, for adults 65 and older, the divorce rate has tripled over that same time period. Often referred to as gray divorce, divorce among seniors may have far-reaching financial consequences. That’s why it’s imperative that those exploring the process consider professional help to make sense of their money matters.

In this study, we look at some of the factors contributing to the rise of gray divorce, potential financial implications of getting divorced later in life and cities where senior divorcees are most common. For more information on our sources and data, check out the Data and Methodology section below.

Several factors have contributed to the rise of gray divorce over the past 30 years. In its 2017 study, Pew Research Center links increases in gray divorce to the aging of baby boomers, the generation made up of individuals born between 1946 and 1964. Specifically, baby boomers had high levels of divorce during their young adulthood, and marriage instability earlier in life has continued later in life. Given that remarriage tend to be less stable than first marriages, the divorce rate for adults ages 50 and older in remarriages is double the rate for those who have only been married once. Additionally, divorce risk is higher among couples who have been married for a shorter period of time.

While the greater frequency of remarrying among baby boomers partially explains the increase in gray divorce, a significant share of gray divorces do occur among couples who have been married for 30 years and longer. Research has shown that with the stigma of divorce decreasing, those who have grown unsatisfied with their marriages may be more likely to use the opportunity to pursue their own interests.

Divorce, at any age, is often accompanied by financial considerations, and may be financially damaging. However, gray divorce may lead to even more financial insecurity as individuals are less likely to be working and have a steady income stream. Even senior divorcees who are still working are closer to retirement and have a smaller time period over which to save and recover financially. Below we discuss three of the most important financial considerations for seniors getting divorced: Social Security and Medicare, retirement savings and long-term care.

It is typically more expensive for two people to live separately than to live together. Following a divorce, a couple’s retirement savings may not be enough for both partners to maintain the same standard of living over the course of their retirements. As a result, both spouses may need to delay retirement, reduce their standard of living or move to a more retirement-friendly area with lower taxes and cost of living.

Additionally, gray divorcees will need to figure out how to divide an employment-sponsored retirement plan. Our guide, How Are 401(k) Assets Split in a Divorce?, can help.

Seniors who are getting a divorce find themselves without a built-in support system, losing the individual who they had expected to provide some level of care for them in old age. It is important for gray divorcees to consider not only the many types of long-term care facilities and their advantages or disadvantages, but also their varying costs. Assisted living facilities are generally less expensive than nursing homes or a skilled nursing facility, though they may provide less care and not be feasible for someone who requires more help. 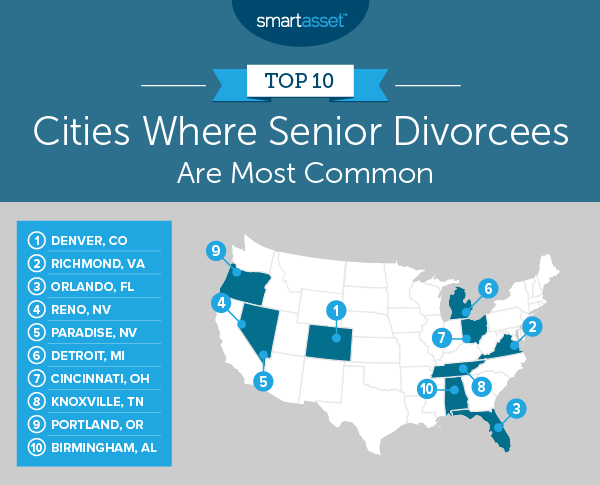 Cities Where Senior Divorcees Are Most Common

The Census Bureau reports the marital status for residents in 133 of the largest cities in the U.S. Though this data does not indicate the point in time at which residents divorced, it does provide more color on which cities in the U.S. have the most divorcees older than age 64. Below, we discuss the top 10 cities of those 133 (for which marital status is reported) where senior divorcees are most common.

Though the percentage of adults 15 years and older who are divorced in Richmond, Virginia is only 0.7% higher than the national average, the percentage of seniors who are divorced is 13.6% higher than the national average. In 2018, 27.8% of the Richmond residents 65 years and older were divorced. Seniors going through divorce may have a more difficult time financially in Richmond. The 2018 median household income was less than $50,000 and ranks in the bottom third of all 133 cities in our study. Divorced women may fare better in old age in Richmond than elsewhere given that the city ranks No. 3 in our study on the best cities for women’s pay.

Living in Florida is a common choice for retirees due to its tax-friendliness. There is no state income tax, so Social Security retirement benefits, pension income and income from an IRA or 401(k) are all untaxed. Despite these incentives, it’s still important for residents who are going through a divorce to pay particular attention to their financial stability, as studies show that senior divorcees face further financial insecurity. In Orlando, Florida specifically, 26.5% of the population older than 64 was divorced, according to 2018 Census data.

Reno, Nevada has the highest population of divorcees of any city in our study. About 18.4% of the population 15 years and older in Reno was divorced in 2018. In terms of the proportion of seniors who are divorced, Reno ranks fourth-highest. Approximately 26% of residents 65 years and older are divorced. On the plus side for divorced seniors, Reno ranks No. 1 in our study on cities where it’s getting easier for renters to save.

Located on the Tennessee River, Knoxville is home to many senior divorcees. About 23.5% of the population 65 years and older were divorced in 2018. Household incomes in Knoxville tend to be low as well. The 2018 median household income was $40,459, the 19th-lowest of all 133 cities in our study, indicating that gray divorcees in Knoxville may need to seek more comprehensive advice about their overall finances as a result of the separation process.

In 2018, about 23.4% of Portland, Oregon residents 65 years and older were divorced, the ninth-highest percentage for this metric across all 133 cities in our study.  In 2018, though, the median household income in Portland was more than $73,000, the highest of the 10 cities where senior divorcees are most common and the 19th-highest in the study overall. 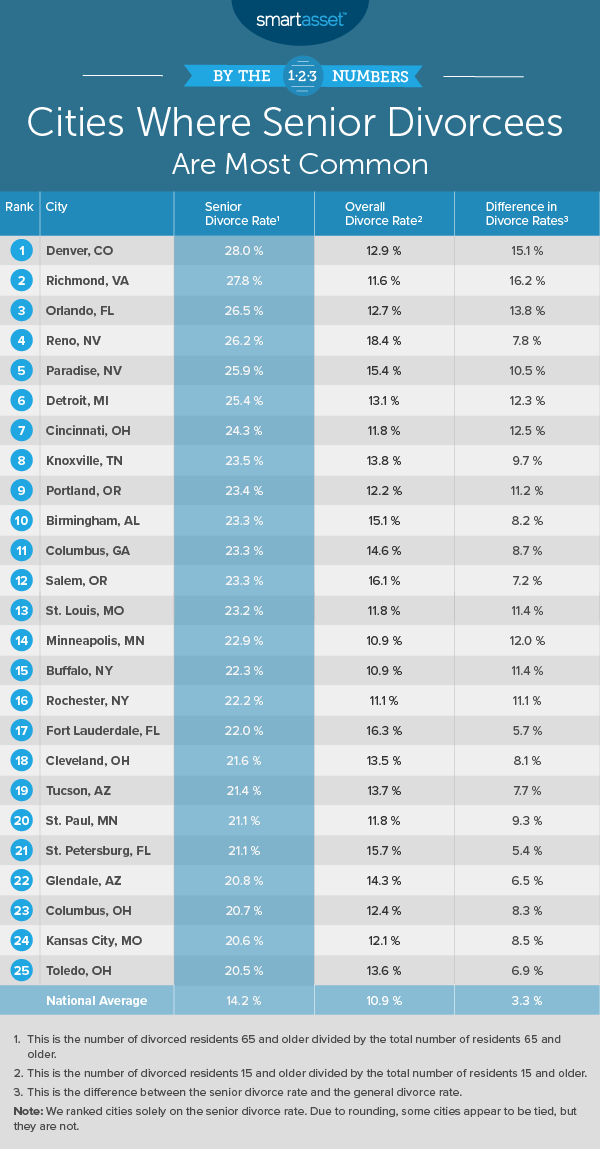 To find the cities where senior divorcees are most common, we considered 133 of the largest cities in the U.S. for which marital status data was available. We then ranked cities according to the percentage of the population 65 years and older who are divorced.

Tips for Protecting Your Retirement in a Split