Places Where People Spend the Most on Food – 2021 Edition 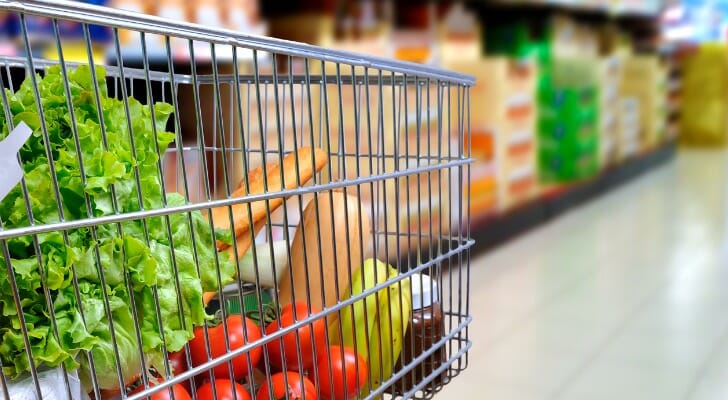 While inflation continues to linger, the price of food is among the few commodities that hasn’t skyrocketed in the last year. According to the Consumer Price Index for All Urban Consumers, which tracks the price of goods and services, food prices were just 3.7% higher in August than they were 12 months earlier. That may sound like a lot, but when compared to the 25% increase in the energy index, food prices have been far more stable.

To determine where people spend the most on food, SmartAsset examined data for 22 metro areas from the Bureau of Labor Statistics’ 2019-2020 Consumer Expenditure Survey. We considered the following two metrics: average food spending per household and average household income. For details on our data sources and how we put all the information together to create our final rankings, check out the Data and Methodology section below.

This is SmartAsset’s third study on the places where people spend the most on food. Check out the 2020 version here. 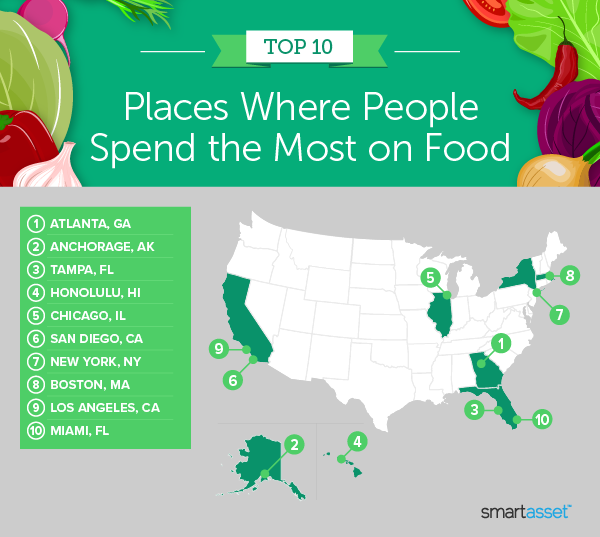 In the Anchorage, Alaska metro area, food expenditures account for 11.24% of the average household income, the second-highest percentage of all 22 areas in our study. Anchorage, No. 11 in last year’s rankings, vaulted nine spots up this year. Residents spend an average of $10,291 on food each year, while 7.51% of the average household income pays for food eaten at home, the highest such percentage of any metro area.

Residents of greater Tampa, Florida, spend on average 10.85% of their household income on food each year, the third-most out of all 22 metro areas. Only Atlanta has a higher percentage of household income spent on food away from home. In Tampa, people spend 4.69% of their income, or $3,699, on food outside of their homes.

The second California metro area in the top 10, Los Angeles ranks ninth overall for food spending as a percentage of household income (9.49%). Residents of the City of Angels and its surrounding areas spend an average of $8,869 per year on food, including $3,820 on food eaten away from home. That means L.A. residents spend 4.09% of the average household income on eating out, the fifth-highest percentage for that metric. 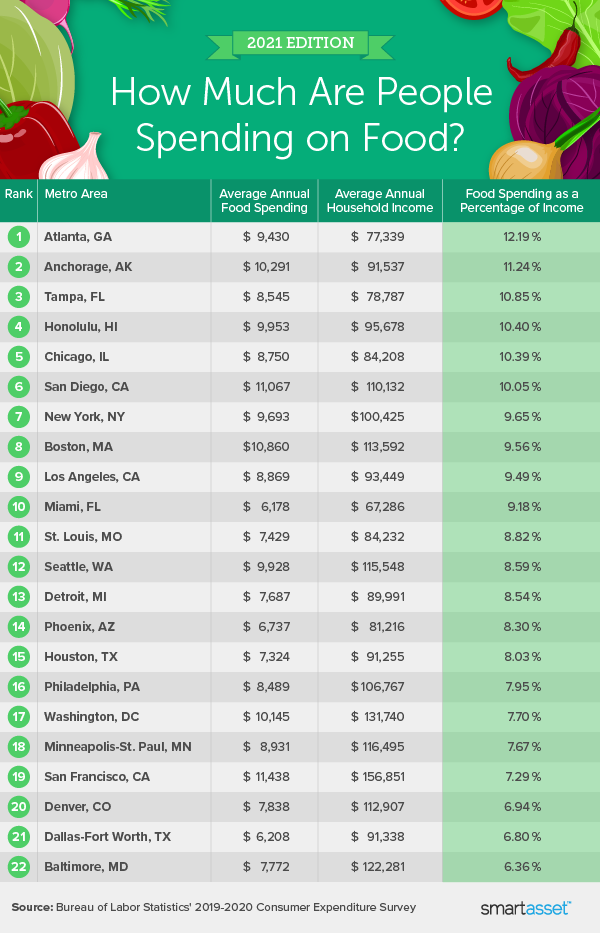 To find the places where people spend the most on food, we looked at data for all 22 metro areas included in the Bureau of Labor Statistics’ 2019-2020 Consumer Expenditure Survey. Specifically, we examined data for the following metrics: