Places Where Inflation Has Spiked the Most – 2021 Study 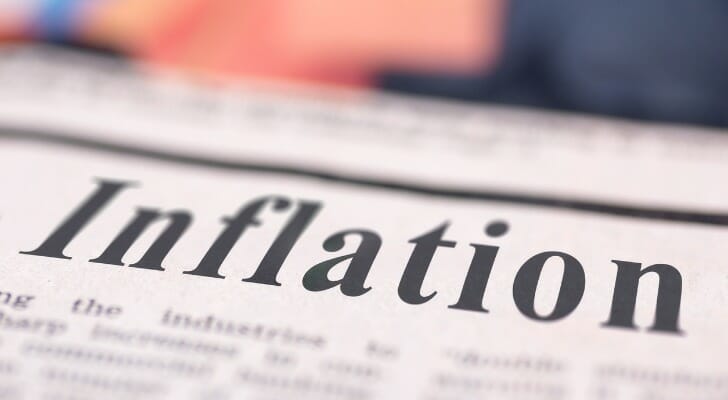 By the end of July 2021, the price of gasoline had surged almost 42% over the previous 12 months and the price of used vehicles spiked at nearly the same rate. While skyrocketing prices of these two commodities are the most dramatic examples of rising prices in today’s economic environment, they illustrate a simple truth: inflation is soaring.

The Consumer Price Index (CPI), which measures the change in prices paid by consumers for goods and services, increased 5.4% during the 12-month period that ended in July 2021, and the same for the 12-month period ending in June 2021. Fueled by massive consumer spending and supply chain bottlenecks, national inflation is at its highest level since July 2008 when the CPI rose 5.6% from a year earlier. In fact, between 1990 and 2020, inflation grew by only 2.4% per year, far below the current year’s pace. With so much attention on inflation, SmartAsset set out to determine the places in the U.S. where the price of goods and services has spiked the most. 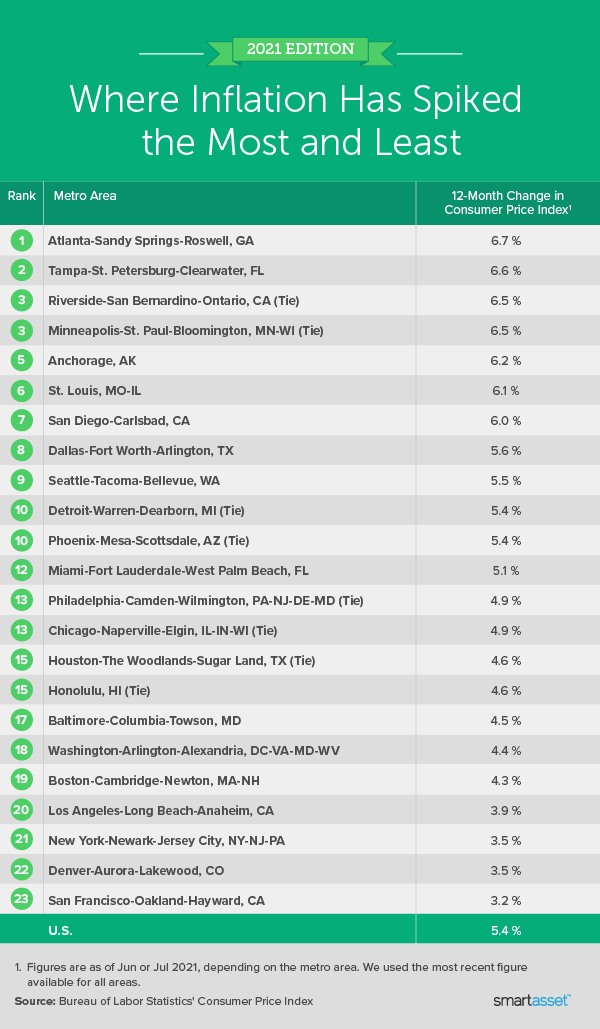 Places With the Largest Inflation Spikes

While the CPI increased 5.4% over the 12-month period ending in July, inflation rates in nine metro areas across the country exceeded that national average. In Atlanta, Georgia, a 59.3% spike in gasoline prices helped push the overall CPI up 6.7% for the 12-month period that ended in June.

In California, the Riverside-San Bernardino-Ontario metro area saw consumer prices jump 6.5% during the 12-month period that ended in July. A 37.5% increase in gasoline prices pushed the overall price of energy up nearly 27% during that span. The CPI also increased by 6.5% in the Minneapolis-St. Paul-Bloomington metro area, where the price of used motor vehicles jumped 19.2% for the 12 months ending in July.

Meanwhile, the CPI advanced 6.2% in the Anchorage, Alaska area for the 12 months ending in June, the fifth-largest increase in the country. During that time, the price of used cars and trucks in Anchorage surged 42.1%.

Places With the Smallest Inflation Spikes

Consumer prices in the San Francisco-Oakland-Hayward metro area rose only 3.2% year-over-year in June, the lowest inflation rate out of all 23 metro areas tracked by the BLS. Across the New York and Denver metro areas, prices rose 3.5% during the 12-month period that ended in July, which is tied for the second-smallest CPI increase in the U.S.

The Los Angeles-Long Beach-Anaheim metro area saw prices jump 3.9% in the 12 months ending in July, while the Boston-Cambridge-Newton area had a 4.3% jump in its CPI during the same span of time, which is fifth-lowest across all 23 metro areas.

Tips for Hedging Against Inflation