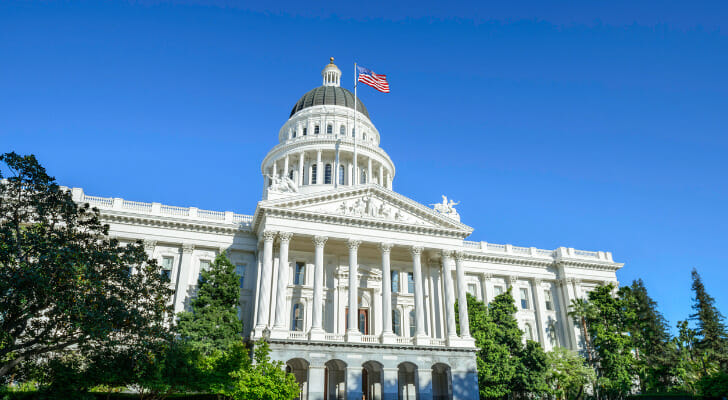 Beyond acting as headquarters for the state’s high court, the state legislature and the governor’s office, state capitals can also be ideal places to live. Some state capitals are more populous, bustling metropolitan areas while others are sleepy towns where the government is the biggest industry. SmartAsset crunched the numbers on all 50 to identify the state capitals that are the best to live in.

To do so, we considered 10 metrics spanning three categories: employment and education; affordability; and livability. For details on our data sources and how we put all the information together to create our final rankings, read the Data and Methodology section below.

This is SmartAsset’s eighth study on the best state capitals to live in. Check out the 2020 version here. 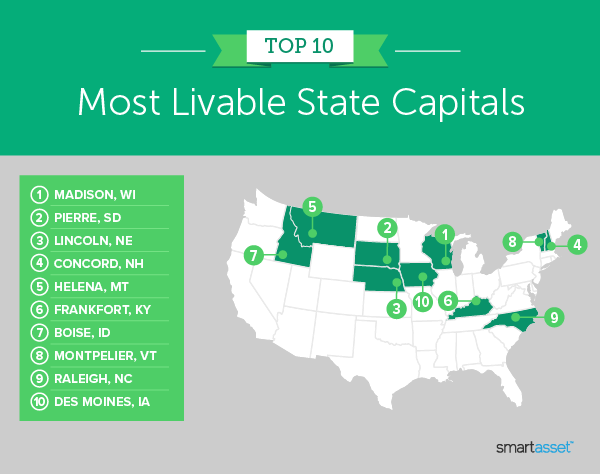 Madison, Wisconsin takes the prize as this year’s best state capital to live in. It ranks first in the livability category, with the fifth-shortest average workweek (36.7 hours) and the 10th-lowest property crime (2,474 incidents per 100,000 residents). Madison also places fourth in our employment and education category, ranking ninth-best for both low unemployment in June 2021 (3.5%) and a strong high school graduation rate (88.64%).

Pierre, South Dakota is the No. 2 most affordable state capital to live in, according to the study. The estimated cost of living for an individual there is $22,087 after taxes, the third-lowest amount for this metric overall. Pierre also places seventh-highest in terms of income after housing costs, a total of $52,280. Job security in Pierre is relatively strong, as the city places second-lowest overall in terms of June 2021 unemployment, 2.6%.

Lincoln, Nebraska is the sixth-best ranked capital city overall for the category of employment and education. It has the lowest June 2021 unemployment rate in the study (2.5%). It ranks towards the middle of the study for the other two metrics in this category, including 22nd-best for a high school graduation rate of 83.17%. The next best ranking for Lincoln is 13th-lowest overall for property crime.

Concord, New Hampshire is the highest-ranked Eastern capital on this list, and it places first overall in the employment and education category. That includes a five-year change in income of 23.14% (11th-highest in the study) and a June 2021 unemployment rate of 2.9% (third-lowest). Crime is relatively low in Concord, at second-lowest overall.

Helena, Montana is another capital city with great prospects for employment and education, ranking fifth in that category. The unemployment rate in June 2021 was 3.4%, seventh-lowest overall. Incomes have gone up 21.89% over the past five years, the 15th-highest jump we observed for this metric. Helena is also a good city for work-life balance, as the average hours worked per week is 36.8, sixth-fewest in this study.

Frankfort, Kentucky ranks fourth in the category measuring affordability, buoyed by an estimated cost of living of just $21,915, the second-lowest we observed across all 50 state capitals. Frankfort ranks eighth-best for a relatively low down payment-to-income ratio (0.52). Frankfort also has the ninth-highest change in income over the past five years, going up 23.61%.

Boise, Idaho ranks eighth in the category of employment and education. That includes the fourth-lowest unemployment rate in this study, a rate of 3.0% for June 2021. The city’s income went up 22.00% over the past five years, the 14th-highest jump observed overall. Boise’s cost of living is $23,123, the ninth-lowest in the study.

Montpelier, Vermont is the second of two New England capital cities to place in the top 10. It finishes in the top 20 of the study for all three categories. Montpelier had an unemployment rate of 3.2% in June 2021, the fifth-lowest rate for this metric overall. Montpelier also has the lowest violent crime rate in the study, just about 149 for every 100,000 residents. There are also just 2,315 incidents of property crime for every 100,000 residents, eighth-lowest out of all 50 capital cities.

Raleigh, North Carolina is the only Southeastern capital in the top 10, and it ranks third in the employment and education category. That includes ranking 10th-best for both its strong five-year change in income (23.24%) and high school graduation rate (88.24%). The city also ranks third-lowest in both crime metrics, with 256 violent crime incidents and 1,783 property crime incidents for every 100,000 residents.

The final city in the top 10 is Des Moines, Iowa, which ranks fourth in the affordability category. That is driven by the city having the sixth-lowest down payment-to-income ratio (just 0.50) and the 11th-lowest cost of living for an individual (about $23,212). Additionally, Des Moines has the sixth-highest high school graduation rate overall (89.01%).

To find the best state capitals to live in, we considered metrics in three different categories:

First, we ranked each state capital in each metric. We then found each city’s average ranking in each of the three categories and ranked them based on that average. Unemployment received a double weight, while each of the crime metrics received a half weight. Each city received an index score within each category, with the top city receiving a score of 100 and the bottom city receiving a score of 0. From there, we found each city’s average index score and formed a final ranking based on that.