Best Places to Celebrate Halloween in 2021 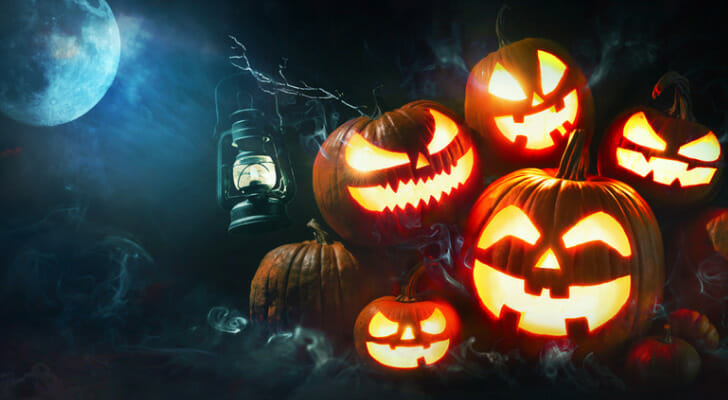 Listen up, ladies and ghouls – it’s Spooky Season once again. Get out your favorite decorations, figure out your costume ideas and get ready to eat more candy than you should, because Halloween is upon us. While the COVID-19 pandemic may still put a bit of a damper on the holiday once again this year, hopefully many people, especially those with kids, will be able to celebrate. SmartAsset crunched the numbers to identify and rank the best cities in America for Halloween (though unfortunately, we couldn’t confirm how many houses hand out full-size candy bars vs. how many hand out raisins).

To find the best cities to celebrate All Hallows’ Eve, we compared 210 cities across metrics including the percentage of children in the population, housing affordability, internet access, crime rates, COVID infection rates, weather, number of costume shops and number of candy stores. For more details, read the Data and Methodology section below. 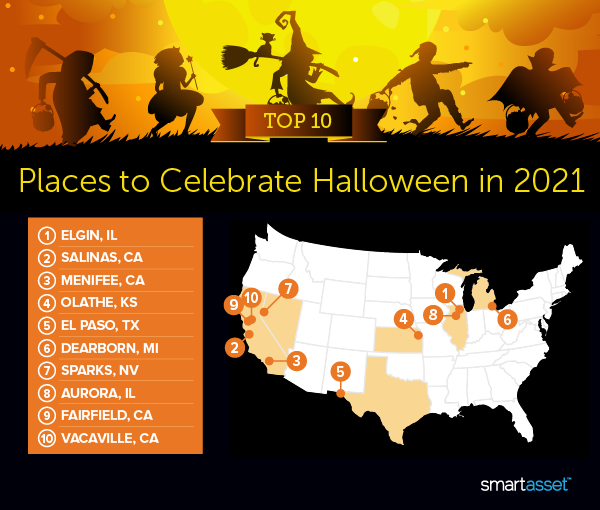 Elgin, Illinois is the best city in America to celebrate Halloween, riding the third-best ratings in our family friendliness index to the top of the list. People under the age of 14 make up 22.61% of the population, and the down payment-to-income-ratio is 0.70, ranking 26th and 37, respectively. The city is also relatively safe, with the sixth-lowest rate of property crime (1,275 incidents for every 100,000 residents).

Salinas, California ranks fourth in our study for the Halloween festiveness index. That includes having 41.90 costume shops and 11.33 candy stores for every 10,000 total establishments, ranking 17th and fifth in this study, respectively. Salinas is on the expensive side, though, falling close to the bottom with a down payment-to-income ratio of 1.92.

Menifee, California has just a 0.6% chance of precipitation on Halloween, making it the city in this study where your trick-or-treating is least likely to get cancelled because of weather. The city ranks 28th out of 210 for relatively high youth population, with 22.41% of residents age 14 or younger.

Olathe, Kansas is the most family-friendly city in this study. That includes a population where 23.65% of residents are age 14 or younger and the down payment-to-income ratio is 0.72, ranking 15th and 40th in this study, respectively. Internet access is also very common, placing 23rd with 93.35% of households having connection access – helping to make any of your virtual ghoulish gatherings, as well as last-minute costume-related purchases, feel less like a nightmare.

Dearborn, Michigan ranks 15th for our family friendliness index, specifically ranking fifth-highest for youth population (24.87% of residents age 14 or younger) and 44th-best in home affordability (with a down payment-to-income ratio of 0.72). The city ranks in the top quartile for temperature, with the Halloween average deviating just 3.2 degrees from a perfect 60 degrees.

The weather is great for Halloween celebrations in Sparks, Nevada, with only a 1.0% chance of precipitation and the average temperature varying just 3.4 degrees from a perfect 60 (ranking ninth and 44th, respectively). It’s also a fairly young city, with 21.93% of the population aged 14 or younger (the 33rd-highest youth population overall).

Fairfield, California ranks eighth in the Halloween festiveness index of this study. There are 33.10 costume shops and 12.41 candy stores for every 10,000 total establishments, ranking 47th and second, respectively. Fairfield also ranks sixth for internet access, with 95.08% of households able to access the internet.

The final city in the top 10 is Vacaville, California, which shares its festiveness metrics with Fairfield, as they are in the same county. Vacaville has 94.12% of households able to connect to the internet, good for 15th out of 210 in the study. It places 39th-lowest for the number of COVID-19 cases, with 16.88 new cases for every 100,000 residents each day.

To find the best cities to celebrate Halloween in 2021, we analyzed 210 cities in 10 metrics across four categories:

First, we ranked each city in each metric, assigning equal weight to every metric except for the two crime metrics, which each received a half-weight. Then we averaged the rankings across the four categories listed above. For each category, the city with the highest average ranking received a score of 100. The city with the lowest average ranking received a score of 0. We created our final ranking by calculating each city’s average score for all three categories.