States Most Affected If the CFPB Is Eliminated 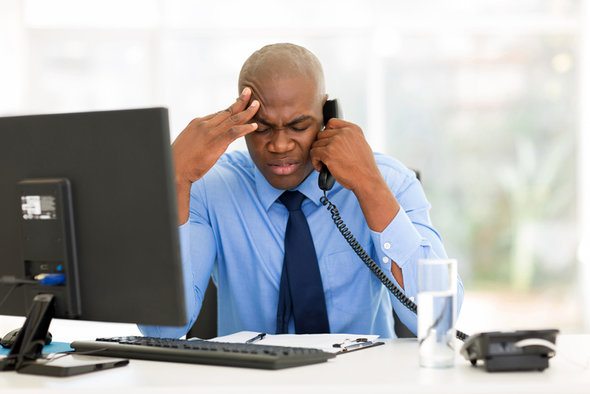 The Consumer Financial Protection Bureau (CFPB) has given nearly $12 billion back to consumers since 2011. In recent weeks however, President Trump has talked about firing CFPB Director Richard Cordray, and possibly getting rid of the bureau altogether. If this were to happen, consumers in some states have more to worry about than others. Below SmartAsset takes a look at CFPB data to see which states benefited the most from the bureau and therefore stand to lose the most if it disappears.

In order to find which states will be most affected if the CFPB is eliminated, we looked at factors like complaints per 10,000 residents, complaint close rate, complaint relief rate and consumer dispute rate. All of this data came from the CFPB’s anonymized database of consumer complaints. 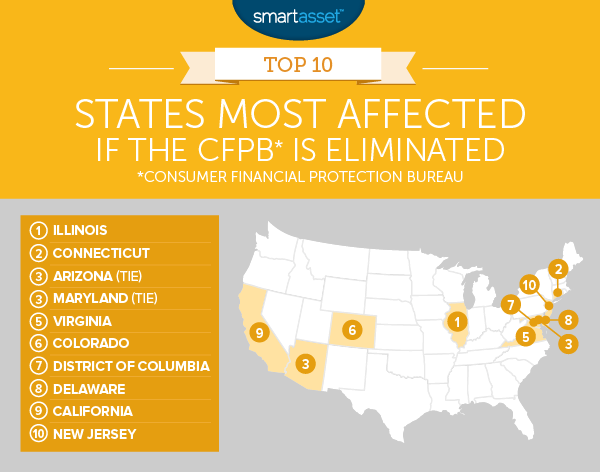 The Prairie State takes our top spot for the state which will be most affected if the CFPB is eliminated. In 2016, according to data from the CFPB database, Illinois residents lodged just under 7,500 complaints to the CFPB. On a per capita basis, this gives Illinois one of the highest complaint rates in the country with 5.79 complaints per 10,000 residents. Another reason Illinois residents may be sweating if the CFPB goes away, is how successful the bureau has been with helping to get money back for them. Over 20% of complaints from Illinois were closed with some form of relief for the person complaining, thanks in part to the CFPB.

The Constitution State comes in second. Connecticut has an even higher complaint rate than Illinois with just over six complaints per 10,000 residents. The CFPB has helped Connecticut consumers recover money on numerous occasions. Over 20.4% of complaints made by Connecticut residents were closed with relief, meaning the CFPB helped the consumer come to some kind of resolution with the financial institution. That’s the highest rate in the top 10.

The CFPB helps consumers by taking action against companies that use abusive or misleading tactics which otherwise might go unpunished. One example of this occurred in Arizona. The CFPB sued five auto lenders for failing to disclose the annual percentage rate (APR) in their advertisements.

In terms of getting relief for complaints, the CFPB has not done as well in Maryland. About 16.9% of complaints were closed with relief in Maryland. That’s the lowest rate in the top 10, and ranks 43rd in the country.

Virginia residents use the CFPB fairly frequently. This state has one of the highest complaint rates in the country with 7.29 complaints per 10,000 residents. Virginia also has a very high consumer dispute rate, meaning consumers in Virginia are often not happy with how an issue was closed.

One reason why Virginia may have a high dispute rate is that the state has a low rate of complaints closed with relief. Virginia ranked 31st for percent of complaints which were met with either monetary or non-monetary relief to the consumer.

The Centennial State takes sixth place for states most affected if the CFPB is eliminated. This state had one of the highest consumer dispute rates in the country at 21%. A consumer can file a dispute after a case is closed. So if the consumer is unhappy with the financial company’s response, the consumer can then dispute the response.

Colorado also has a high complaint rate with 6.55 complaints per 10,000 residents. Colorado’s most troublesome issue was with incorrect information on their credit report. Just over 17% of all complaints from Colorado were about this topic.

No residents in any part of the country lodged complaints more frequently than residents of the nation’s capital. D.C. residents complained at a rate of 17.69 per 10,000 residents. Fortunately for D.C. residents, the CFPB was fairly helpful at resolving their issues. Just over 99% of complaints were closed and 19.25% of them were closed with relief.

The District complained about a wide range of products with mortgage leading the way. D.C. also had one of the highest complaint rates about credit cards.

Delaware is another state with unhappy consumers of financial products. The First State has the fourth-highest complaint rate and the ninth-highest dispute rate in the country. The CFPB has been pretty good about getting residents of Delaware some form of relief for their issues. Almost 19% of complaints lodged by Delaware residents were closed with relief of some form for the consumer.

The Garden State rounds out our top 10 of the states most affected if the CFPB is eliminated. Residents of New Jersey complained at a rate of 8.38 complaints per 10,000 residents, the seventh-highest rate in the country. Residents here were also aggressive about disputing a company’s response to the original complaint. Just over 18% of consumers disputed the resolution of their complaint.

In order to find the states most affected if the CFPB is eliminated, SmartAsset looked at data on all 50 states, plus the District of Columbia. Specifically, we looked at the following four factors: