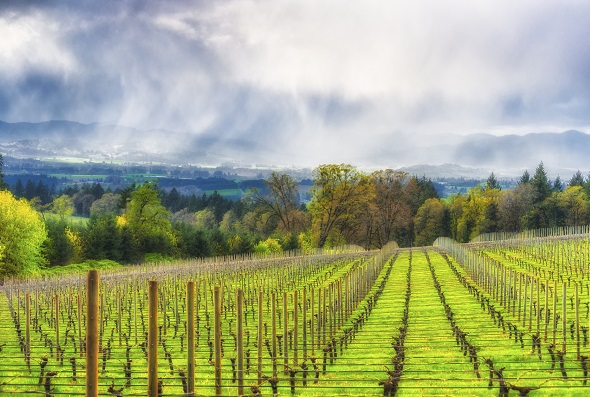 1976 was a year that changed the wine world forever. On a spring afternoon in Paris, a British wine merchant brought together a panel of esteemed French sommeliers to hold a blind tasting comparing several French and Californian wines. It was an all but foregone conclusion that the French experts would prefer the French wines. But then the unthinkable happened: the sommeliers chose the American wines.

If that single event, known as the Judgement of Paris, served to announce America’s arrival as a maker of world-class wine, the forty years that have passed since have only improved the reputation of U.S. wine. Today, outstanding wineries can be found from Oregon wine country to New York’s Hudson Valley.

Even states such as New Mexico and Michigan are getting in on the fermented action. Indeed, with so many great wineries to choose from, American wine connoisseurs may have trouble deciding which regions deserve a visit.

To locate America’s best wine destinations, SmartAsset analyzed data on the 98 U.S. counties with at least 5 wineries. We looked at metrics such as the number of wineries in each county, the geographical concentration of wineries and the number of top-101 wineries (as ranked by The Daily Meal).

As a measure of the cost of a wine vacation in these counties, we also considered the average price of an AirBnB rental in each destination. (Read more about our methodology below.) 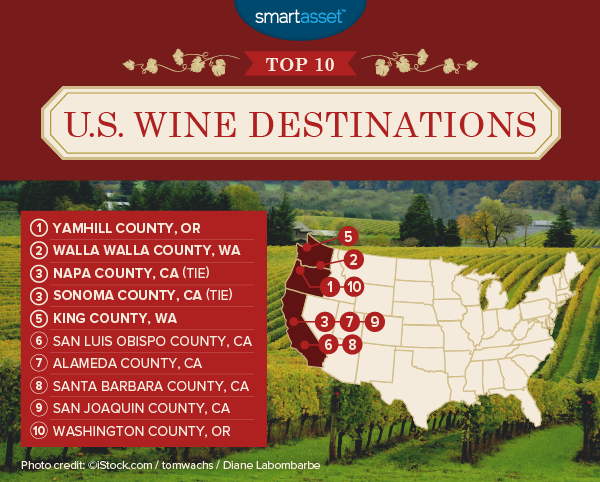 Located at the northern end of the Willamette Valley, Yamhill County is the heart of Oregon wine country. The county is home to roughly 80 wineries, which means that there is one winery every 8.9 square miles in Yamhill County. That is the third highest concentration of wineries of any county in the U.S.

It isn’t just quantity that makes Yamhill County a great destination for a wine vacation, however. The region is known for its world class pinot noir and is home to some of the country’s best wineries, including Domaine Drouhin Oregon and The Eyrie Vineyards, both of which were rated among the 40 best wineries in the U.S.

Read all about Oregon state income tax rules and rates.

Yamhill County should also work well for those who are traveling on a budget. It is less than an hour’s drive from Portland, Oregon. The average price of an AirBnB rental in Yamhill County is about $162 per night, far lower than many other top-rated wine regions.

Walla Walla County is home to two of The Daily Meal’s top 10 American wineries – only Napa Valley has more. The top-ranked Walla Walla wineries are Woodward County and Leonetti Cellars. The latter is only open to those on its exclusive list, but with more than 60 wineries in Walla Walla County, including such acclaimed wine makers as L’Ecole No. 41 and àMaurice Cellars, a wine lover should have no problem filling her days.

There are a number of options for getting to Walla Walla from outside of the Pacific Northwest. Spokane International, one of the country’s best airports, is located less than three hours from Walla Walla. Portland is less than four hours away and the drive up the Columbia River Valley is among the most beautiful scenic drives to be found in the U.S.

The Napa Valley remains America’s largest wine region and it is home to more top-rated wineries than any other area in the U.S. So why isn’t it the top-ranked wine destination? To put it simply: cost. Most travelers will find it difficult to do a Napa Valley wine vacation on a tight budget.

The average price of an AirBnB rental in Napa County is more than $300 per night, fourth highest among major U.S. wine counties. If you enjoy five-star hotels and fine dining, Napa Valley is the place to be, but for those who would rather put their money toward retirement savings, one of the other wine destinations on this list may be a better choice.

Sonoma County sits just west of Napa County and stretches to the Pacific Coast. Many travelers find Sonoma to be less crowded and a bit more scenic that Napa Valley. It is also the more affordable of the two northern California counties, with a cost of lodging that is 20% to 30% lower, one reason it rates as a top California county for retirees.

Located at the heart of the Puget Sound wine country in western Washington State, King County is a great choice for wine travelers who would like to spend some time in a big, vibrant city. Woodinville Valley, where many of King County’s wineries are located, is just 30 minutes from the city of Seattle.

There are also a number of wineries located on the Puget Sound islands, reachable from Seattle by ferry. Among these are Vashon Island’s Andrew Will winery, which was rated the nation’s 22nd best winery by The Daily Meal, and Palouse Winery. Whidbey Island Winery isn’t located in King County but may be worth a visit for the ferry ride and the scenery alone.

The Edna Valley has emerged as one of America’s top wine regions for both the quality of its offering and the beauty of its scenery. San Luis Obispo County is home to more than 90 wineries, including the best winery in America. According to The Daily Meal, Tablas Creek Vineyard, located just outside of Paso Robles, was America’s best winery in 2015.

Oakland and Berkeley may be the most well-known parts of Alameda County, but the Livermore Valley wine region should not be overlooked. It is home to more than 30 wineries, including two that have been making wine for more than a century, Wente Vineyards and Concannon Vineyards. While it does not have the cachet of Napa or Sonoma, the Livermore Valley is a far more affordable destination than either.

Want to move to California wine country? Here’s everything you need to know about California tax rules.

If you want to enjoy a glass of wine with your feet buried in sand as you watch the sun set over the Pacific Ocean, Santa Barbara County is your place. The county is home to more than 70 wineries, many of them located in the Santa Ynez Valley. Among the most highly-regarded Santa Barbara wineries is Au Bon Climat, which has a large tasting room in downtown Santa Barbara, just a mile from the beach.

The San Joaquin Valley is California’s largest wine region, with more than 100,000 acres of vineyards. The valley extends far beyond San Joaquin County, but within the county itself there are more than 30 wineries. San Joaquin is among the most affordable wine destinations in SmartAsset’s study, with an average AirBnB price that ranks fourth lowest, at $86 per night.

For America’s tenth-best wine destination, we return to Oregon State. Washington County is located just west of Portland, but you won’t see much evidence of the city in the Tualatin Valley. Its wine industry has grown rapidly in recent years (the U.S. Census Bureau lists 13 wineries in Washington County, which is likely an underestimate).

For those who enjoy a beer every now and then, a pit-stop in Portland may be worth the time; the Rose City has more microbreweries than any other city in the United States. 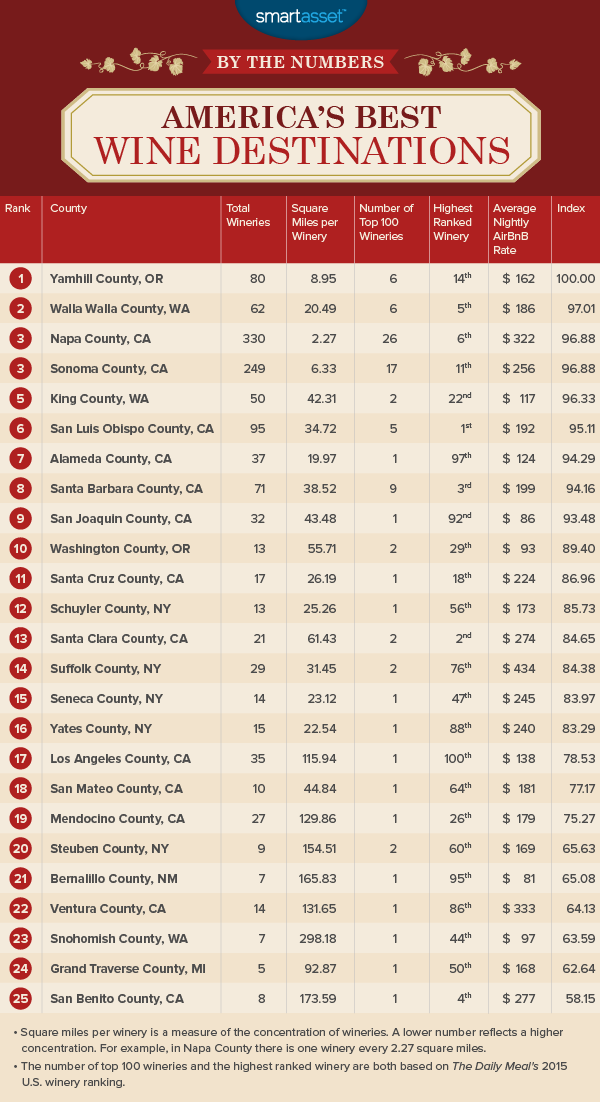 SmartAsset’s analysis of America’s best wine destinations considered the 98 U.S. counties with at least five wineries. For each of those 98 counties, we collected data on the following five metrics:

SmartAsset ranked each of the 98 counties in our analysis on these five metrics. Next, we averaged those rankings, giving half-weight to the AirBnB average price and full weight to the other four metrics. Lastly, we calculated an index score between 0 and 100 based on that average, with the best overall county scoring a perfect 100.