The Most Efficient U.S. Airports 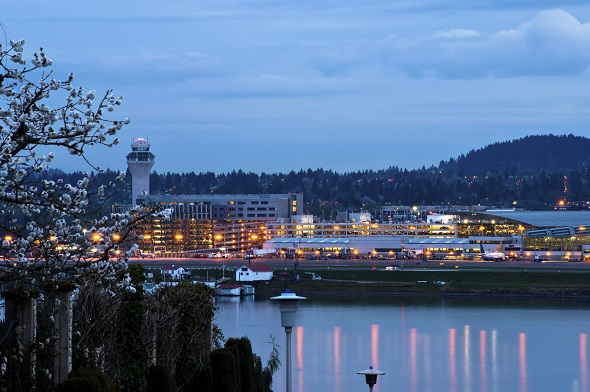 Flying somewhere this holiday season? You won’t be alone. Nearly 1 million flights passed through U.S. airports in November and December last year. With air travel volumes still ascending, 2015 promises more of the same. That means higher ticket prices, longer lines at security and every traveler’s nemesis: overbooked flights. And big crowds are just one reason holiday travel can be a drag.

Check out these 5 tips to save on holiday air travel.

Along with the aforementioned inconveniences, lost luggage and flight delays also rate among the biggest downers for travelers and nothing grounds the holiday spirit quite like a canceled flight. Plus there’s the large expense of travel during the holidays.

There are certainly ways to save money on travel (like by using rewards credit cards) and the obvious way to avoid these perils is to skip the traveling altogether and stay home for the holidays. If you must get out of dodge for a while, however, some airports will serve you better than others.

To find the most efficient U.S. airports, SmartAsset looked at data on the more than 5.85 million flights that crossed American skies over the past year. For the 100 largest airports by flight volume1 we analyzed seven different metrics of performance, including the average departure delay, the cancellation rate and the average time spent on the runway. (Read more about our methodology below.) 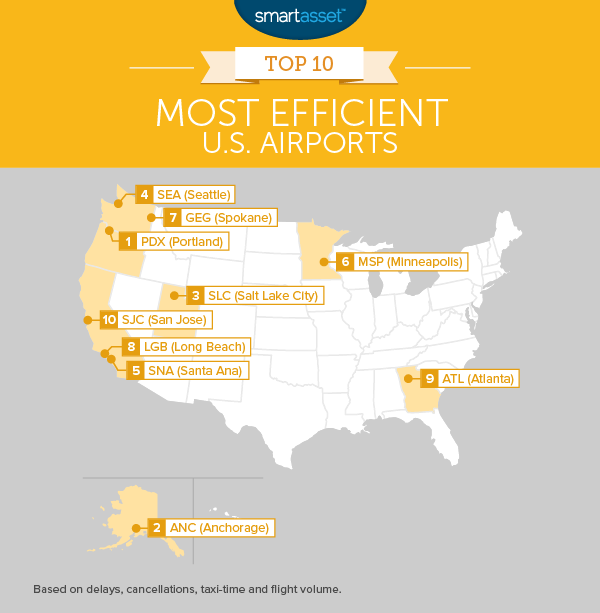 Portland’s much-beloved airport rated in the top 20 for every single efficiency metric we considered. Just 0.4% of flights departing from PDX over the past year were canceled, a fraction of the national average cancellation rate.

Even on the rare occasions that a flight is canceled, travelers should find themselves fairly comfortable at PDX.  The airport receives rave reviews for its dining and shopping amenities. Those who have some time on their hands might want to leave the airport altogether. Downtown Portland is easily reachable from PDX by light rail (one reason Portland is also a top city for conferences).

Thinking about an Alaskan voyage this winter but worried about travel issues? Rest easy. ANC is among the country’s best airports. Just 0.7% of flights through ANC over the past year were canceled. Likewise, Anchorage International has the lowest average departure delay of any airport in the country at just 7 minutes.

While Anchorage receives an average of 79 inches of snow per year, double the average in Chicago, the airport is never caught off-guard by winter weather. Plows are always at the ready to keep runways clear.

Thinking about a ski trip this winter? If you’re wary of delayed or canceled flights putting a freeze on your plans, Salt Lake City may be a good hub for any downhill adventures. Salt Lake City International Airport rated second or first in four of the metrics we considered in our analysis. It has the second lowest average departure delay and second lowest cancellation rate.

The second airport in the PNW to rank among the country’s top five most efficient, Sea-Tac has the lowest cancellation rate of any major U.S. airport. Just 0.37% of flights out of SEA were canceled over the past year. That is less than a quarter of the national average.

John Wayne International is the most efficient of several airports in the Los Angeles area. Others include LGB (Long Beach) and LAX (Los Angeles), which respectively ranked eighth and 44th in our analysis. Santa Ana edges both on its cancellation rate and the percentage of departing flights that are delayed by 60 or more minutes. Less than 1% of flights out of SNA are canceled, while about 4.4% are delayed by an hour.

The top-ranked airport east of the Continental Divide, MSP serves as a major hub for Delta Airlines. It is also the largest airport in the upper Midwest, handling some 116,000 flights over the past year. Despite that volume, MSP rated in the top 15 of major U.S. airports in four of the metrics we considered.

Unsure how to choose a rewards credit card? We’ve got you covered.

The only areas in which it did not excel were related to taxi-time. On average, it takes flights out of MSP 17 minutes to take off after they leave the gate.

The second airport in Washington State to rank among the country’s top 10, Spokane International (formerly Geiger Field) handles about 10,100 flights per year. Among the cities which have non-stop flights to and from Spokane are Chicago, Minneapolis, Denver and Los Angeles. GEG rated third in SmartAsset’s analysis for both the average length of delays and the percentage of departing flights that are delayed by an hour or more.

This Los Angeles-area airport is the smallest to crack the top 10, handling about 1.4 million passengers per year. As a result of local ordinances that restrict flight noise and frequency, it is unlikely to expand. Nonetheless, the airport has daily flights to a range of cities including Boston, New York and Austin. It also has the fourth lowest average departure delay of any of the country’s largest 100 airports.

Hartfield-Jackson Atlanta International is easily America’s busiest airport, handling about 375,000 flights per year. That’s more than 1,000 flights per day, more than double the volume of all but four other U.S. airports. Nonetheless, despite that traffic, ATL performs quite well across the metrics SmartAsset analyzed.

It had the fifth lowest cancellation rate of any major airport in the U.S., with cancellations on just half a percent of all departing flights over the past year. It’s major delay rate likewise ranked among the 20 lowest, with a mere 4.5% of flights leaving an hour or more after their scheduled departure from ATL.

Flying into (or out of) the Bay Area? If you’re able to pick and choose your airport, San Jose International may be your best bet. It tops the airports in both San Francisco and Oakland for cancellation rates and the average length of departure delays. Arriving flights also reach their gate quickly at SJC, spending an average of just 4.2 minutes on the runway. That is the 9th lowest taxi-in time of any major airport. 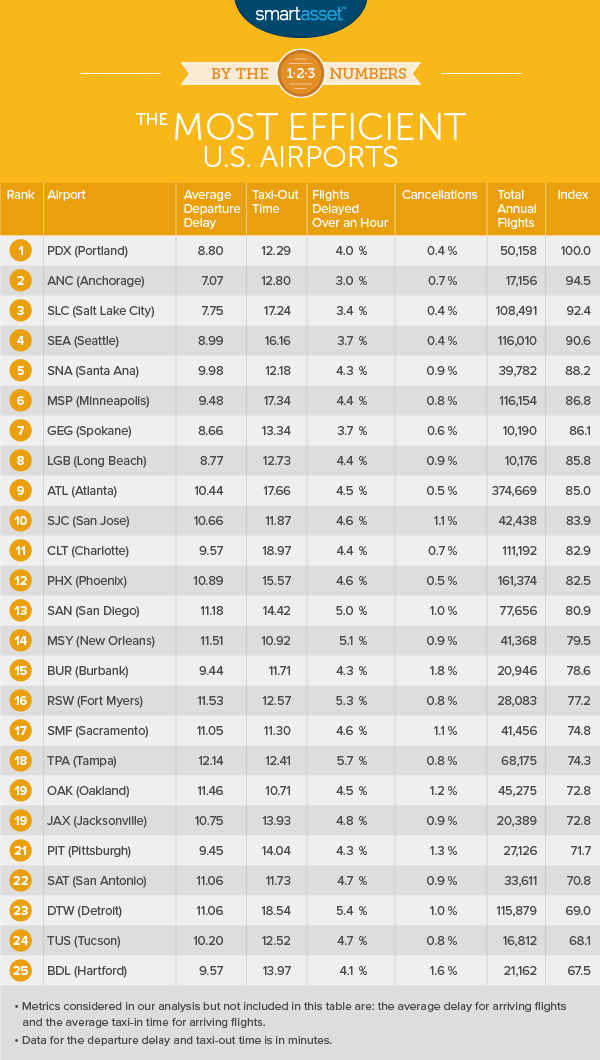 To find the country’s best airports, SmartAsset looked at flight data from the Bureau of Transportation Statistics. We analyzed each of the 5.85 million flights that departed from or arrived at a U.S. airport from August 2014 through July 2015. For each of the country’s largest 100 airports we calculated the following six metrics:

After calculating these statistics for each airport, we ranked all 100 airports across all seven metrics. We then averaged those rankings, giving half weight to the taxi-in and taxi-out time for each airport and full weight to the other metrics. We assigned scores from 0 to 100 according to these average rankings. The top rated airport scored a 100, while the airport with the worst average ranking scored a 0.

1. We did not include Hawaii in our analysis. The state’s geographic isolation means that airports in Hawaii face significantly different operating conditions than airports on the mainland.