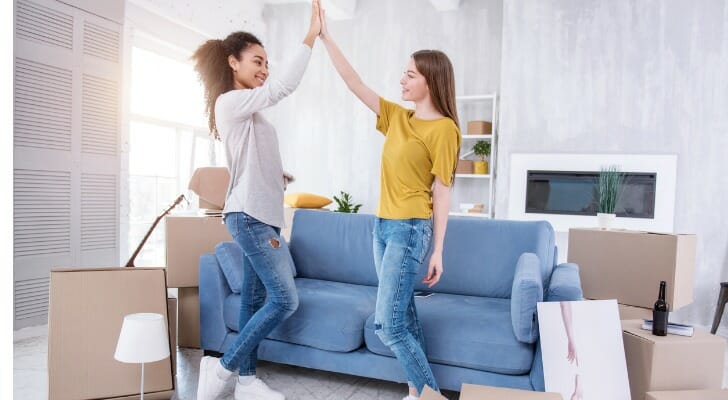 Renters in America’s largest cities are no strangers to roommates. As rent costs have risen so has the need for renters to group together to save on housing costs. But while rooming with a friend or an associate certainly has its financial benefits, it also comes with a loss of privacy and comfort that can be hard to value. Below, we take a stab at answering one side of that equation to find the places where having a roommate saves you the most money.

To find the cities where a roommate can save you the most money we looked at data for 50 U.S. cities. Specifically, we looked at the average rent for a one-bedroom and compared it to the average rent for a two-bedroom. We then measured the difference between renting a one-bedroom alone and renting a two-bedroom with a roommate. Check out our data and methodology below to see where we got our data and how we put it together to create our final rankings.

This is SmartAsset’s fourth annual study on how much a roommate saves you. Read the 2017 version here. 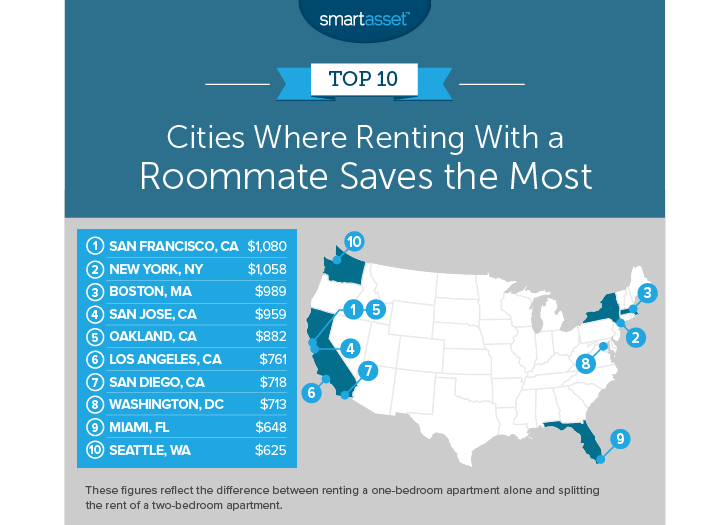 Our data shows that the average one-bedroom in the Big Apple goes for about $2,865 per month. That is equal to $34,378 per year. In order to comfortably afford that and not be housing cost-burdened you would need to earn over $114,500 per year. Most people, even New Yorkers, aren’t earning sums that large. In order to significantly lighten the rent burden, find a roommate and switch to a two-bedroom. We estimate it could save you just under $12,700 per year.

The rent in San Jose is a bit more affordable than it is in Boston, meaning the potential savings from moving in with a roommate are slightly less. In total, we estimate that switching from a solitary existence in a one-bedroom to teaming up with a roommate to take on a two-bedroom rental could save $960 per month. That’s an extra $960 that residents can send to their financial advisor or to their savings account.

You don’t need to live in San Francisco to feel the pain of rising rents. The whole Bay Area is afflicted by it, including Oakland. The good news is that the pace of change seems to have slowed. Our data suggests rents in Oakland have stayed relatively flat over the past year. However rents are still high and so the benefits to finding a roommate remain. We estimate that an average renter could save $10,600 by switching from renting alone in a one-bedroom to with a single roommate in a two-bedroom.

Living in L.A. can be great. Year-round pleasant weather, great food and plenty of access to mother nature. However, moving to Los Angeles also means dealing with traffic and high rent costs. If you are moving to Los Angeles and don’t know any locals, you may be tempted to rent a one-bedroom. However, with an average price of $2,307, a one-bedroom apartment is out of reach for most. To live comfortably in the average one-bedroom apartment, we estimate you would need an income of nearly $92,300. On the other hand, we estimate you would only need an income of roughly $61,800 to live in the average two-bedroom apartment with a roommate.

One theme that emerges in this analysis is that renting in California is particularly expensive. Want to rent a one-bedroom in San Diego and spend less than 30% of your income? Well, to do that we estimate you will need to have an income of about $73,800. By switching from a one-bedroom to a two-bedroom with a roommate you would save $718 on average in San Diego. That’s an annual savings of $8,600 per year, a nice sum to build up a down payment or a retirement investment fund.

The nation’s capital is another place where it pays off to find a roommate. The average one-bedroom here costs just under $2,100 per month while half of a two-bedroom costs $1,360. To afford a one-bedroom apartment here comfortably, and not be housing cost-burdened, you would need an annual income of roughly $83,000. That same figure for one share of a two-bedroom is about $54,400. In total, we estimate one could save over $700 per month by living with a roommate.

Miami is one of the most severely housing cost-burdened cities in the country. In total we estimate that nearly 25% of homeowners spend at least 50% of their income on housing. Renters who want to save some money and lighten the burden of rent costs should consider a roommate. We estimate that living with a roommate in Miami could save you about $650 per month. So you have to ask yourself one question: is living alone worth $650 per month?

The Emerald City takes the last spot in this top 10. We rate the benefits of a roommate at $625 per month. The average one-bedroom here costs just under $2,000 per month while half a share in a two-bedroom costs $1,370 per month. To afford a one-bedroom comfortably, we estimate you’ll need an annual income $79,800. To afford the two-bedroom share and not be housing cost-burdened, we estimate you’ll need an income of $54,785.

In order to find the cities where a roommate saves you the most, we looked at data on 50 U.S. cities. We compared them across the following two metrics: