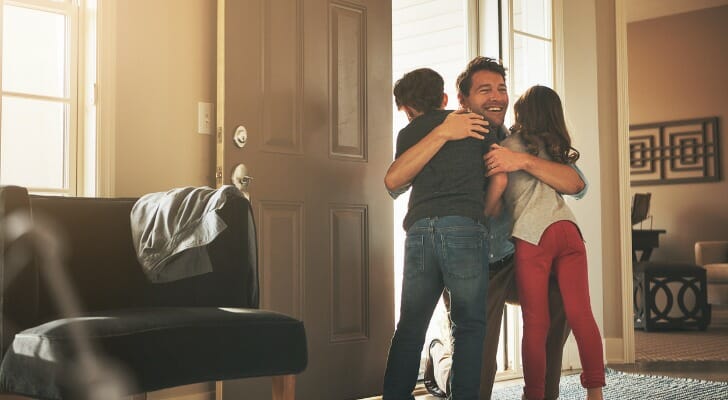 Bureau of Labor Statistics data shows that there are about 33.6 million families in the U.S. with children under the age of 18. In 2018, at least one parent was employed in almost 91% of those family households. Among the smaller subset of married-couple families with children, about 97% had at least one working parent and 63% had two working parents. Although job insecurity and shifting ways of life and work are a new reality for many households across America due to the spread of COVID-19, there are essential workers and others whose offices have opened up who must report to work and also make sure their children are taken care of.

Balancing the demands and costs of childcare and a job outside of the house is no simple task, but some cities may offer more favorable conditions for working parents than others. That’s why SmartAsset decided to explore some of the best cities for working parents in America. To do this, we considered a total of 581 cities and examined data on them across eight metrics, which span topics including, housing, safety and education. For details on our data sources and how we put the information together to create our final rankings, check out the Data and Methodology section below.

This is SmartAsset’s fifth annual look at the best cities for working parents. Take a look at the results from 2019 here. 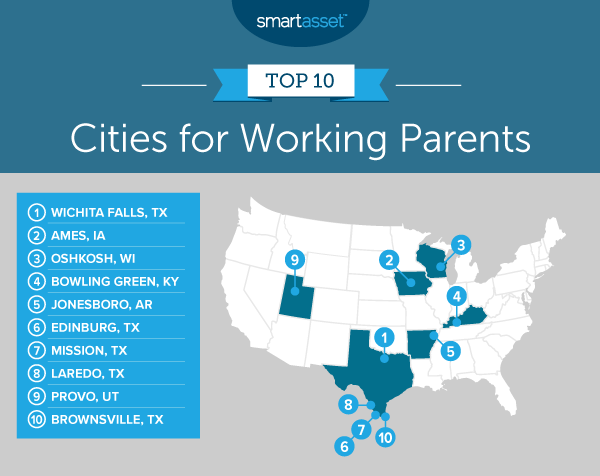 Wichita Falls, Texas ranks in the top eighth of cities in the study for five metrics: high school graduation rate, median annual housing costs, percentage of the labor force working 50 weeks or more per year, average commute time and average annual childcare costs. Part of Wichita County, it has the highest high school graduation rate (97%) of any city in our top 10 and the sixth-highest rate for this metric overall. According to Census data, in 2018, median annual housing costs were about $9,400, only about half of the labor force worked more than 50 weeks per year and the average commute for workers was roughly 15 minutes. Finally, the state of Texas has the 14th-lowest average annual childcare costs, at $8,193, of all 50 states and the District of Columbia.

Ames, Iowa has consistently ranked as the top city for working parents in America. Data shows that parents may be better able to balance the demands of work and caring for a child due to shorter work hours and commutes. Less than half of the Ames workforce worked 50 weeks or more in 2018, according to the Census Bureau. Additionally, the average commute for workers was 15.80 minutes, the 13th-lowest rate for this metric across all 581 cities in our study.

Oshkosh, Wisconsin ranks as the third-best city in the U.S. for working parents because of its low housing costs, short commute times and high graduation rate for high schoolers. Census Bureau data from 2018 shows that median annual housing costs for residents in the city were less than $10,000, and the average commute time for workers was about 17 minutes. According to the County Health Rankings, the high school graduation rate was nearly 91% in 2019.

Bowling Green, Kentucky ranks in the top 25 cities for three metrics: average commute time, high school graduation rate and average annual childcare costs. Our data shows that the average commute for workers is less than 17 minutes and the high school graduation rate in the area is close to 96%. Finally, the average annual cost of childcare is less than $6,500 in the state of Kentucky.

Jonesboro, Arkansas has the lowest median housing costs of any city in our top 10 and the 20th-lowest amount for this metric overall, with residents paying $9,000 annually on average. While incomes fall behind other cities (the 2018 median annual income was $45,057), the area has a high graduation rate for high schoolers (about 93%). Arkansas also has the third-lowest average childcare costs of any state and the District of Columbia. Data from the Economic Policy Institute shows that the average annual costs of infant care and care for a four-year-old in Arkansas total $6,890 ($574 every month) and $5,478 ($457 every month), respectively.

Edinburg, Texas ranks as the sixth best city for working parents in this year’s study, performing particularly well in terms of its low median annual housing costs ($9,156) and average commute time (16.5 minutes). Edinburg additionally offers working parents the opportunity for affordable childcare. Texas has the 14th-lowest average childcare costs, at roughly $8,200, of any state and the District of Columbia.

Mission, Texas ranks the best for safety of any city in our top 10. In 2018, there were an estimated 110 violent crimes for every 100,000 residents, a rate that places Mission in the top tenth of our study for this metric. Additionally, housing is relatively affordable in the city. The median annual housing costs in Mission are less than $9,100, according to 2018 Census Bureau data.

Laredo is the fourth Texas city that makes it into our top 10. Laredo ranks in the top fifth of cities for three metrics: median annual housing costs ($10,392), high school graduation rate (91.30%) and average annual childcare costs (less than $8,200). Moreover, many parents may work in jobs that receive paid time off. In 2018, more than 54% of the workforce worked less than 50 weeks per year (i.e. had at least two weeks of vacation time).

Provo, the third-largest city in Utah by population, moved up from its ranking in last year’s study from 10th to ninth. Paid time off for workers in Provo generally seems to be available. According to the Census, only about 46% of workers worked 50 or more weeks per year in 2018, the 11th-lowest percentage for this metric across all 581 cities in the study. Provo also ranks in the top fifth of cities for two other metrics: average commute time (18.8 minutes) and high school graduation rate (90.70%).

SmartAsset created this list of the best cities for working parents by looking at the 600 largest cities in the U.S. Of those cities, 581 had complete data across the following eight metrics:

It is important to note that in our previous version of this study we additionally considered the metric: unemployment rate. We did not include that metric this year, as unemployment rates have changed so drastically during the coronavirus pandemic and city-level figures for 2020 are not yet available.