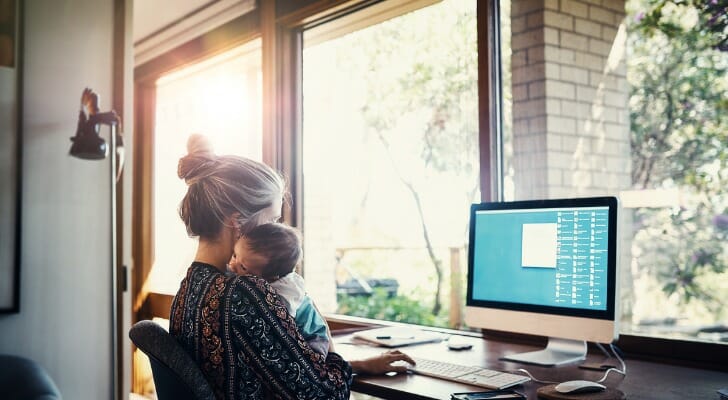 In about 62% of two-parent households, both parents work, according to 2017 data from the Bureau of Labor Statistics. That’s up about 1% from the previous year. Not only are more parents working, but Census data also shows that men and women across the country worked more in 2017 than in 2016. It’s also not much of a surprise that more parents are working. Housing costs, childcare and the overall cost of living continue to rise while incomes have seen less growth. So if you want to make ends meet now while also achieving big goals like buying a home and socking away money in a savings account, you’ll need to work more. Considering multiple factors, we created this list of the best cities in the U.S. for working parents.

In order to find the best cities in the country for working parents, we considered data on nine metrics. We looked at data on the unemployment rate, median household incomes, median annual housing costs, the percentage of the workforce working more than 49 weeks per year, average commute times, crime rates, graduation rates, state family leave policies and the costs of childcare. 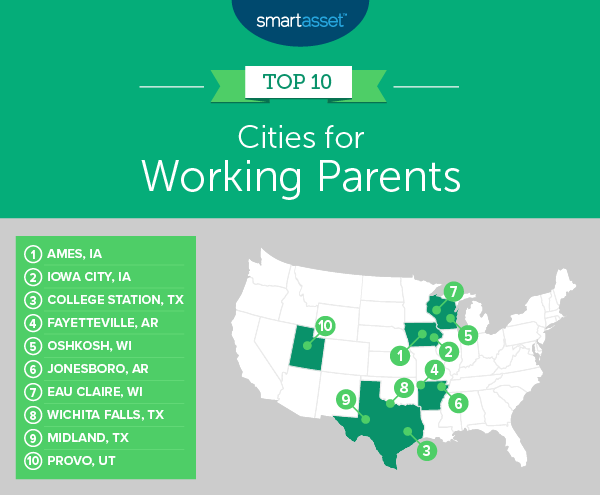 While Ames ranks about average in terms of median incomes, those incomes are enough to cover housing costs. Annual housing costs make up just 22.65% of the median annual income. Getting to work is also manageable. The average commute time for residents is less than 18 minutes and ranks in the top 10% of the study. And since schools are a major concern for many parents, you may be happy to hear that Ames has the 29th-highest high school graduation rate in the study, at 92.30%.

Moving up one spot from last year is Iowa City, Iowa. In most metrics, Iowa City isn’t far behind the No. 1 spot. The unemployment rate is 1.60%. That’s second-lowest out of the 524 cities we considered. Annual housing costs are affordable at less than 25% of the median income, and the low violent crime rate ranks among the best 25% of cities. The city also ranks in the top 10% for its high school graduation rate of 90.70%.

If you’re considering buying your first home in Iowa City, make sure to check out some of the first-time homebuyer programs available in Iowa.

After missing out on last year’s top 10, College Station, Texas once again ranks as a great place for working parents. For one, unemployment in the city is relatively low at 2.70%. Getting to work is also easy, given an average commute time of about 16 minutes. That’s the 20th-shortest commute time in the study. College Station ranks among the safest in the study with a violent crime rate that ranks in the top 25% of all cities. Childcare costs are low and rank in the top 12% of cities.

Cracking the top 10 for the first time is Fayetteville, Arkansas. The biggest reason is that the average annual cost of full-time center-based childcare ranks in the top 10 of the study. About nine out of 10 children also go on to graduate from high school. Additionally, the low housing costs in Fayetteville rank in the top 12% of all cities. Parents looking for work will appreciate that the city’s unemployment rate is just 2.40%. That’s well below both the national rate and the overall unemployment rate in Arkansas, according to the Bureau of Labor Statistics. Workers should also note that the Fayetteville metro area is one of the best places for creatives.

After ranking seventh, then eighth and then ninth over the past three years, Oshkosh, Wisconsin claims a top-five spot for 2019. As you consider different cities in which to raise your family, be sure to take into account that Oshkosh ranks in the top 30% for both its low crime rate and its high school graduation rate of nearly 90%. The unemployment rate of 2.40% ranks in the top 7% (37th-best overall) and an average commute time of just 17.4 minutes means it’s relatively easy to get to work. The median income in Oshkosh is less than $50,000. But housing costs, which include property taxes and homeowners insurance, are also affordable. Annual housing costs only make up about 20% of the median annual income. That’s a very low rate.

Jonesboro, Arkansas is similar to Fayetteville in that it can partially thank low childcare costs for its spot in this study’s top 10. The city has a top-10 score in that metric. Local schools can take pride in Jonesboro’s 90% high school graduation rate. That rate ranks in the top 16% of all 524 cities in this study. Housing in the city is also affordable. In fact, Jonesboro ranks in the top 10% of all cities for this metric.

Rising nine spots from last year is Eau Claire, Wisconsin. The city ranks well in both job- and family-related metrics. The unemployment rate of 2.30% ranks in the top 6% of cities in our study. The annual housing costs are relatively low and rank in the top 20% of our study. And even though median incomes aren’t necessarily among the highest in the study, housing costs make up less than 20% of the median income. That’s a very low rate relative to the Census Bureau’s recommended maximum of 30%. Getting to work takes just 16 minutes on average, the 19th-best rate overall in the study. Eau Claire also ranks in the top 30% for its low violent crime rate.

A few metrics stand out when looking at Wichita Falls, Texas. For one, the average commute time to work is just 14.40 minutes. That’s the lowest in the entire study. In addition to the likely savings on gas that the short commute time brings, annual housing costs in the city are low, at about $8,800. The other standout metric for Wichita Falls is its high school graduation rate. At 94.70%, the city has the second-highest rate of the 524 cities in this study. Coupled with the low childcare costs, which average less than $8,000 per year, parents have a lot to appreciate if considering raising a family here.

The metric that most helps Midland, Texas rank in the top 10 this year is its unemployment rate. At 2.1%, Midland has the 15th-lowest unemployment rate in the study. The median income in the city is also quite high at approximately $75,000. That ranks in the top 25% of all cities in this study. The average commute time of 20 minutes also ranks among the best 25%. Childcare costs are low in Texas overall and the Midland high school graduation rate comes in at 89.20%, which puts it in the top 25% of the study for this metric.

Rounding out this top 10 is Provo, Utah. While it fell eight spots from last year, it’s still a great city for working parents. Unemployment is low at 2.70%. The median annual income, while lower than other cities in the study, still help residents to afford housing. Annual housing costs make up 24.51% of the median income. Getting to work is also relatively quick, with an average commute time of 18.30 minutes for residents. That leaves time for parents to enjoy with their families. Crime rates in Provo are also among the lowest we found, in the top 11% of the study. 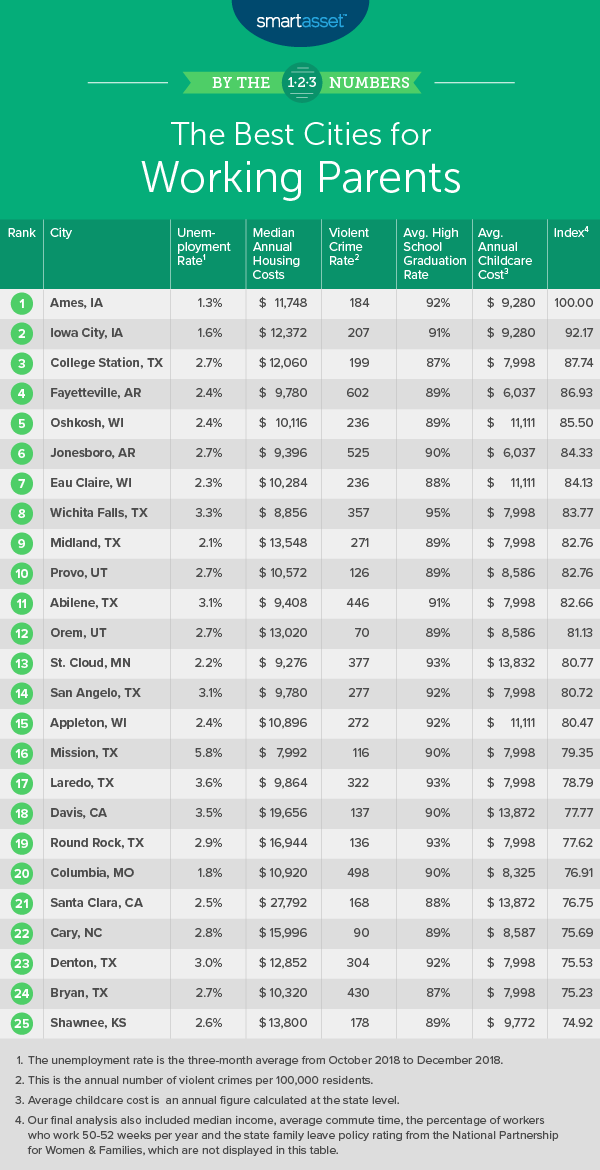 SmartAsset created this list of the best cities for working parents by looking at data for 524 cities. Specifically, we compared the cities across the following nine metrics: