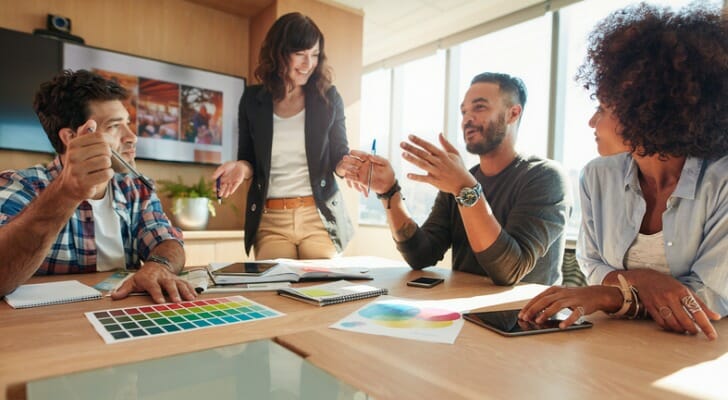 Some cities are more famous for their creative histories than others. For example, Nashville and New Orleans are practically synonymous with their rich musical traditions. Los Angeles is known as the place to be to work on movies and New York has a long history as a place where writers congregate. But are those cultural centers the best places for creatives today? In many of those cities, rising costs of living mean creatives struggle to meet financial milestones like buying a home or saving up for a secure retirement.

In order to find the best places for creatives, SmartAsset looked at data for 181 metro areas. We compared those metro areas across two metrics: concentration of creatives and cost of living. Check out our data and methodology section below to see where we got our data and how we put it together. 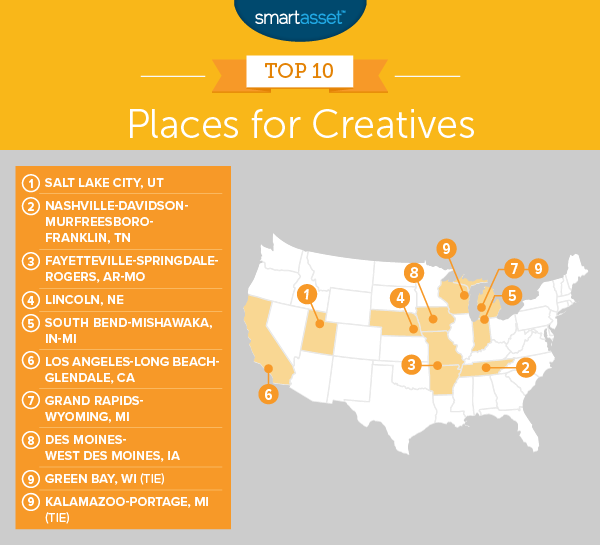 Salt Lake City leads the way for creatives in this study. This city is fairly affordable with a cost of living over 6% lower than the national average. That is one reason it also ranks as one of the best cities for young professionals.

In total there are over 7,500 creatives working in this metro area, the third-most in our top 10. One popular creative occupation here is graphic designer. There are 1,730 graphic designers in the Salt Lake City area.

The Nashville-Davidson-Murfreesboro-Franklin, Tennessee metro area comes in second. This metro area has the second-most creative workers in our top 10. In total there are 8,700 people employed in creative occupations. This means for every 10,000 workers about 93 works in a creative field.

This metro area primarily ranked well because of its affordability score. According to our data, the area’s cost of living is 13% lower than the national average, giving it the best cost of living score in our top 10. But cost of living alone won’t get you a spot in this top 10. This city has about 70 creatives per 10,000 workers, as well.

Lincoln, Nebraska takes fourth. This city has ranked highly in a few of our studies thanks to low costs of living and a strong economy. Those two factors are good for everyone from those looking for a good work-life balance to people exploring creative careers.

In total there are about 83 people employed in a creative occupation for every 10,000 workers here. If you are looking to do something creative and work in Lincoln, graphic design is probably your best option. There are 430 graphic designers in Lincoln. Another relatively popular occupation is producer and director. There are 150 people employed producing and directing.

This college town is one of the more affordable metro areas in our top 10. According to our data, living in the South Bend metro area costs 8% less than the national average.

South Bend comes in right behind Lincoln for concentration of creatives. In total, this city has 1,110 full-time creatives, the least in our top 10. However, after adjusting for size of work force that 1,110 starts to sound more substantial. There are just under 83 full-time creative workers for every 10,000 full-time workers in the city.

The LA metro area has the highest concentration of creatives in the country. In total there are just under 103,000 people employed in full-time creative work. That’s more than the rest of the top 25 combined.

Everyone knows if you want to be an actor, Los Angeles is a great place to be. There are over 10,000 actors in the City of Angels and over 21,000 producers and directors. But there are creatives roles outside of the movie business, too. There are over 4,300 fashion designers in Los Angeles, for example.

Grand Rapids-Wyoming, Michigan takes seventh. This area has just under 4,000 full-time creatives in its workforce, equal to about 72 creatives per 10,000 workers. That score, while not being particularly high, is enough to crack the top 10 when paired with Grand Rapids’ low cost of living. According to our data, the cost of living in Grand Rapids is over 10% less than the national average.

Iowa’s capital region comes in eighth. This city has around 2,600 full-time creatives and 363,400 full-time workers. That means about 71 out of every 10,000 workers is employed in a creative occupation.

As in other places on this list if you want to live in the Des Moines metro area and do something creative, graphic design is your best option. There are nearly 700 graphic designers in Des Moines. But this is also a good city to be a writer or an editor. Combined there are over 500 people employed as writers or editors in this metro area.

The Green Bay, Wisconsin metro area takes ninth thanks to low cost of living and relatively high numbers of creatives relative to the overall population. In total the cost of living in Green Bay is about 9% lower than the national average.

Popular creative jobs here include graphic designer and floral designer. Combined those two occupations make up 560 of the 1,300 creative workers in the metro area.

Our list ends in another Michigan metro area. Kalamazoo-Portage has about 41 creatives per 10,000 workers, the lowest score in our top 10. However what creatives lack in density in this city they make up for in affordability. The cost of living in the Kalamazoo metro area is 20% lower than the national average, making it one of the most affordable places to work on your creative craft. 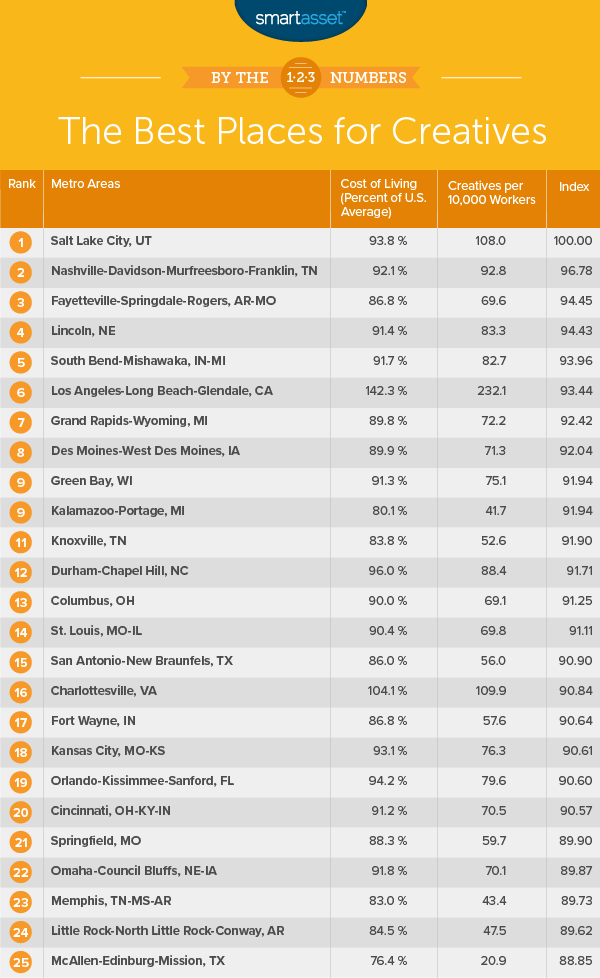 In order to rank the best places for creatives, we looked at the 181 metro areas which we had data for. Specifically we compared them across the following two metrics:

Tips for Making the Most of your Retirement Savings