The Cities With the Best Work-Life Balance 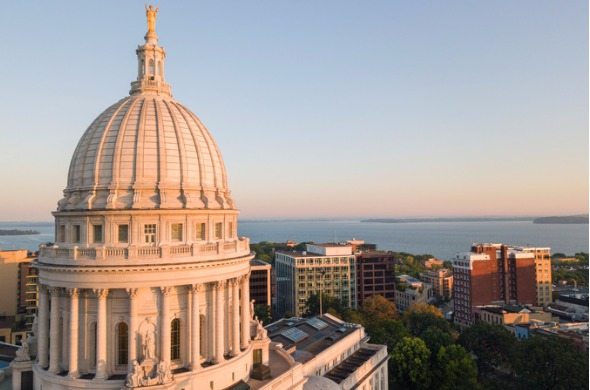 It can be tough to balance work and play. The highest-paying jobs often require the longest hours and the most exciting cities typically come with budget-busting rents. But, while every city has its pros and cons and you likely need to make some compromises, not every city is equal in what it offers its working residents. Below we look through data on employment, home affordability and lifestyle to find the cities with the best work-life balance.

In order to find the cities with the best work-life balance, we looked at data on the 100 largest cities in the country. We compared these cities across 10 metrics. We looked at data on the concentration of entertainment establishments, bars and restaurants, housing costs, home values, average weeks worked, average hours worked, average commute times, percent with long commutes, unemployment rate, and labor force participation rate. For more information, see our data and methodology section below. 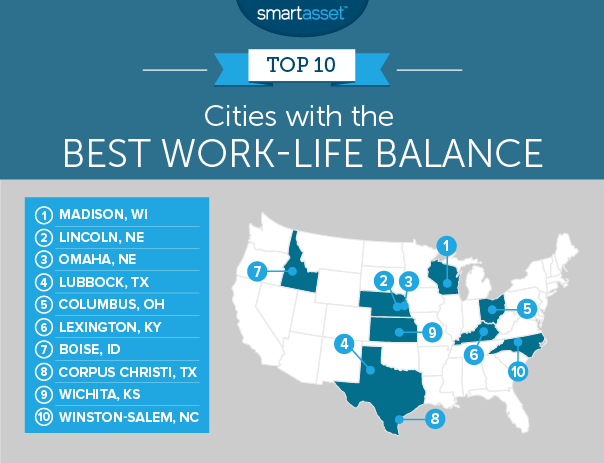 Our data shows that Madison has the best work-life balance in the country. Working opportunities are plentiful: The unemployment rate is only 2.2% and the city has a labor force participation rate of 86.5%. For those two metrics, Madison ranks first and second, respectively.

Workers here also have plenty to do on their time off. About 2.1% of establishments in the Madison area are dedicated to arts, entertainment or recreation, a top 10 rate. There are also plenty of places to grab a beverage and hang out with colleagues as well. Madison has the eighth-highest concentration of bars in our study.

The hard-working residents of Lincoln are rewarded with a great work-life balance. One major concern for many workers is their commute. Rush hour can be a stressful time. Fortunately, commute times in Lincoln are relatively short. The average commute time for someone living in Lincoln is only 18.9 minutes and only 5% have a commute which is longer than an hour.

Another plus to living and working in Lincoln is the affordability of the homes. According to our research, the average full-time worker in Lincoln would only need to dedicate a quarter of their income to housing costs to afford the average home.

Omaha shares some of the same features as Lincoln. Commutes are short on average and housing is affordable, relative to income. They do have some key differences which separate them. Work in Omaha is slightly harder to find. Omaha has an unemployment rate of 3.6%, which is definitely low but higher than Lincoln’s 2.5%.

For people who hate commutes, Lubbock is a good place to be. According to our data, the average commute is only 16 minutes for Lubbock workers, the lowest in our study. Even if you are not one of the residents with a 16-minute commutes, odds are your commute won’t be much longer. Only 3% of residents face a commute over 60 minutes.

Work also seems to be widely available in Lubbock. This city has an unemployment rate of only 2.6%.

With only 27% going to housing Columbus residents can get started saving for retirement.

For a city to have a great work-life balance, workers need to find a balance between working and doing the things they love. But for them to do that, they need to have some extra money in their bank accounts to fund their hobbies.

On average Lexington residents should have a lot of income left after paying for housing. The average full-time worker in Lexington only needs to dedicate 24% of their income to housing to afford the average home. This means they can spend more money on fun activities. Luckily Lexington has no shortage of fun activities. According to our data Lexington has the 12th highest concentration of establishments dedicated to arts, entertainment or recreation.

Idaho’s capital takes seventh. The best part of working in Boise may be the availability of work. This city has an unemployment rate of only 3.5% and a labor force participation rate of 81.4%.

Plus, commute times are short. The average commute for Boise workers is only 18 minutes and only 2.6% of them spend over an hour getting to work.

The second of two Texas cities in our top 10, Corpus Christi, takes eighth. This city scores pretty well in all our metrics, with standout scores in commute times and unemployment rate. Corpus Christi scores in the top 10 in both of those metrics.

However this city scores poorly when it comes to hours spent at work. The average Corpus Christi worker puts in over 40 hours per week, the third-most in our study.

Wichita has the most affordable housing in our top 10. That means workers in Wichita should have plenty left for spending on their hobbies or saving for retirement after they’ve paid for housing.

One drawback is that workers may be slightly pressed for variety when it comes to things to do in the city. According to our data, Wichita scores no better than 29th on the concentration of entertainment establishments, bars or restaurants.

Winston-Salem rounds out our top 10. Residents of this city have a lot of options when it comes to entertainment. According to our data, around 1.7% of establishments are focused on arts, entertainment or recreation.

Commutes are also short, the average worker here only needs 20 minutes to get to work. However, finding work in Winston-Salem is a bit more difficult than it is in other cities. Winston-Salem has an unemployment rate of 5.6%. 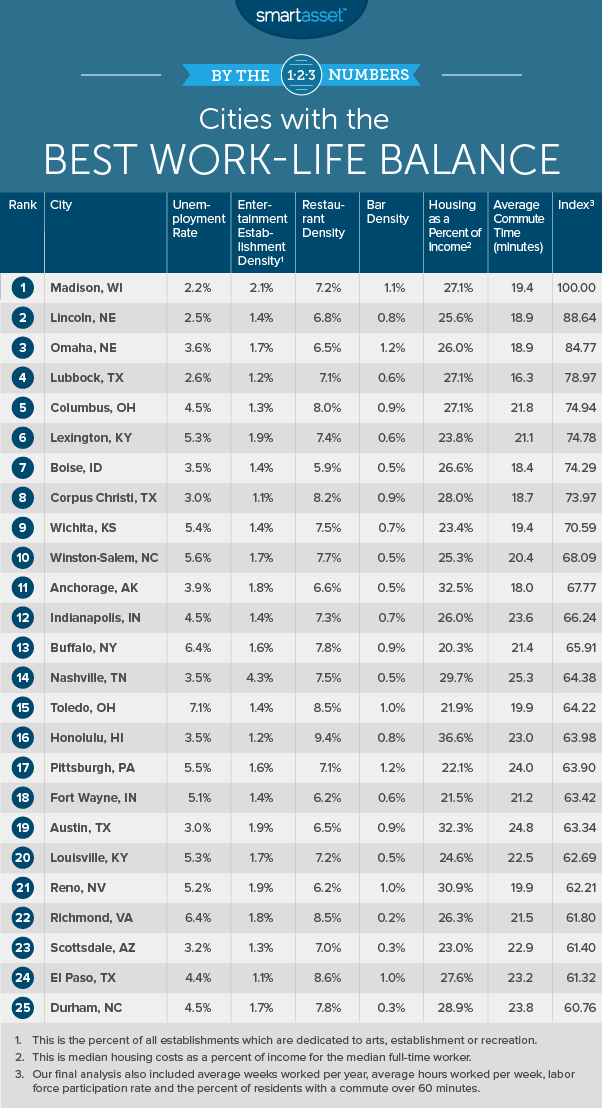 In order to find the cities with the best-work life balance, we looked at data on the 100 largest cities in the country. Specifically, we looked at the following 10 metrics:

While balancing work and fun is important, it’s also important to balance short-term and long-term financial goals. Here are some tips to make sure you’re financially ready for retirement.

If your company offers a 401(k), it’s a good idea for you to start contributing to it as soon as possible. And if there’s a company match, you want to be sure that you’re putting enough money in there to take full advantage of the match. If you don’t, you’re effectively leaving free money on the table.