States With the Worst Drivers – 2018 Edition 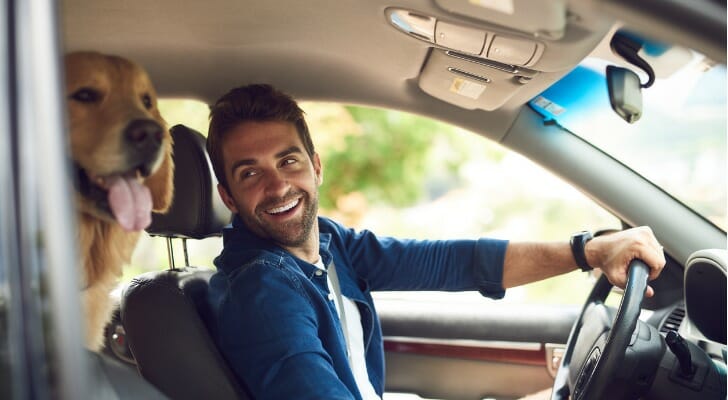 Most drivers probably have a few candidates in mind when they picture the worst drivers in the country. Often it’s drivers from a neighboring state invading their lane, but some states carry a nationwide bad-driving reputation. So while it is perhaps fun to joke about the bad road etiquette of certain motorists, bad accidents and negligent driving are no laughing matter. From serious injury to car repairs draining savings accounts, living somewhere with bad drivers can have a serious negative impact on your life.

Below we rank the states with the worst drivers. To do this, we look at a total of four metrics. We look at the percent of drivers with insurance, number of DUIs per driver, average number of deaths per miles driven and how often residents google terms like traffic ticket or speeding ticket. Check out our data and methodology below to see where we got our data and how we put it together to create the final ranking.

This is SmartAsset’s second annual study on the states with the worst drivers. See the 2017 edition of the study here. 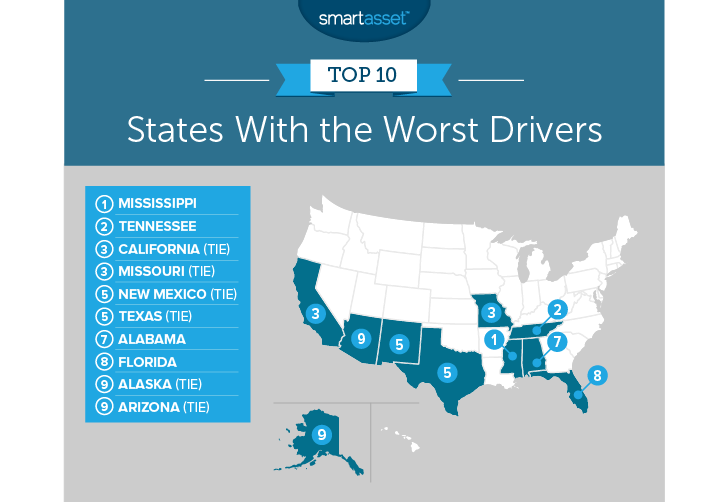 Mississippi takes the top spot as the state with the worst drivers. According to our data, this state has the second-most deaths per 100 million vehicle miles driven. Roughly 1.7 people die for every 100 million miles driven. Insurance rates in Mississippi are also fairly low, which raises the chance that an accident will lead to someone paying for repairs out of pocket. Those high, unexpected costs can really take a toll on the checking accounts of Mississippi drivers. Google Trends data also suggests quite a few drivers run afoul of the law. Mississippi has the 11th highest search volume for ticket offenses.

Another Southern state comes in second. Like Mississippi, Tennessee has low coverage rates for auto insurance. It also has elevated rates of DUIs and fatalities per 100 million vehicle miles traveled. Tennessee ranks fifth for percent of uninsured drivers, 19th for DUIs per thousand drivers and 16th for people killed per 100 million vehicle miles traveled. In fact, Tennessee ranks in the top 20 in every metric. But it is only the lack of top 10 scores that drops Tennessee to second.

The Golden State comes in third. The biggest metro areas here are known for their bumper-to-bumper traffic, which makes life behind the wheel frustrating. According to our data, there is more to worry about than just the traffic. California ranks 12th for DUIs per thousand drivers and 11th for percent of uninsured drivers. One piece of good news is the relatively low fatality rate. California ranks 32nd for number of people killed per 100 million miles driven.

The Show-Me State ties with California for third. Missouri ranks 10th for rate of googling traffic tickets or speeding tickets, an indication that residents are getting tickets more than in other states. Many drivers here also forgo insurance, meaning accidents can get costly. The death rate per 100 million driven miles is also high in Missouri. Data from the National Highway Traffic Safety Administration (NHTSA) shows that 1.28 people die for every 100 million vehicle miles traveled in Missouri. That figure is up from 1.21 in 2015.

Driving around New Mexico could be dangerous for your wallet. According to our research, only 79% of drivers have auto insurance. That means there is more than a 20% chance that if you are in an accident, the other driver won’t have insurance. New Mexico also has the 11th highest rate of DUIs and the 12th highest fatality rate per 100 million miles driven.

To get around the Lone Star State you usually need four wheels. Unfortunately for residents, and for those looking to move to Texas, the drivers have room to improve their driving skills. For example, some of our data suggests that Texas drivers often break the law. The state googles the term “speeding ticket” at the ninth-highest rate. The fatality rate per 100 million driven miles is also higher than average. There were 1.39 deaths per 100 million miles driven in Texas in 2016. That’s roughly the same rate as in 2015.

Alabama has three top-10 scores. Residents in the state google traffic or speeding tickets at the fourth-highest rate in the country. At best, this is a sign that people are interested in learning about local traffic violations. At worst, this Google Trends data shows that large numbers of drivers are breaking the law. More alarming than the traffic ticket searches is the fatality rate. About 1.5 people die for every 100 million vehicle miles driven in Alabama. That is the eighth-highest rate in the country.

Florida dropped to eighth this year after coming in first last year. However, the state still has the lowest rate of insured drivers in the country at 73%. To go along with the drivers forgoing insurance, Florida has very high fatality rates. Florida comes in right behind Alabama with 1.47 fatalities per 100 million miles driven. Fortunately for Florida residents, that fatality rate has fallen by a third since 1994. That year, Florida had a fatality rate of 2.2 fatalities per 100 million miles driven. In total, Florida had nearly 3,200 fatalities in 2016.

Alaska ranks in the top 10 for three out of four metrics. If not for the lowest rate of googling traffic tickets and parking tickets, Alaska would likely rank higher. Alaska has the sixth-highest DUI rate in our study and the fourth-highest fatality rate. If we ranked states just by these two metrics, Alaska would rank number one in our study.

Our list of states with the worst drivers ends in Arizona. The state scores in the top half for all four of our metrics, which explains its spot in the top 10. The state’s worst score comes in fatality rate per 100 million miles driven. According to the 2016 data from NHTSA, Arizona had 962 fatalities. That’s 1.46 fatalities per 100 million miles driven. Fortunately, that figure is trending down. Since 1994, the fatality rate per miles driven has fallen 37%.